Namesake of Austin's first mayor, Judge Edwin Waller, and the waterway that traces the property, the Waller Creek Pub House pays tribute to craft beer and aims to be a part of the revitalization of an undervalued stretch of Downtown whose history is highlighted more by major floods than anything else. 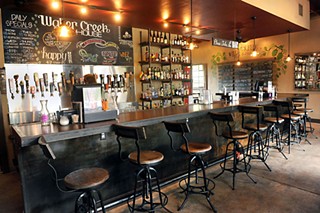 Operating as a vegetable market drive-through in the mid-1900s, the building now housing the pub saw a string of restaurants file in before the current team began remodeling in 2014. Everything came together when longtime buddies Corey Hutchins and Justin Malone – who at the time was helping run Houston's famed Petrol Station – sought an Austin location for their craft beer bar concept. The two met Jesse Lind, who was looking for an event space. Adjacent properties came on the market on the bank of Waller Creek, and the three staked the claim on what are now the pub house and the Waller Creek Ballroom event space. "This project has always been a collaboration of everyone involved," says Malone, the pub's managing partner. Lind, a carpenter by hobby, built the pub's furniture; bartender and manager Sean Bennett, an Enoteca alum, pickles vegetables for the house; and kitchen manager Sonny Peña will often suggest beers to feature on the wall. "We all take on a lot of different roles here," Malone reaffirms.

The wall of taps behind the bar houses 30 craft brews, none of which gets a permanent tap handle. "To have a really well-done 30 taps is somewhat difficult," says Malone, recalling his time in craft beer distribution. "You're having to do stouts, ambers, blond ales, and not get too heavy on one side or the other," he explains. "We're a little heavy on the hops, but that's what we like." Bar manager James Horton (Lavaca Street, Mean Eyed Cat) confirms that their approach to liquor follows the same standards; they don't carry any well liquors either. It's not what most expect from what could marginally be considered Dirty Sixth. Malone interjects that they do serve one "well" beer – Lone Star – against their will. "We'd lose large groups of people because one guy wants Lone Star," shrugs Malone.

Having worked as a beer rep for six years after relocating to Austin, Malone hosts events centering around Austin's craft beer culture and industry. Monthly Brewery Feature Nights and Beer Rep Happy Hours introduce patrons to new or rare beers at a discount – often beer reps will even buy you a beer. "Pint nights are played out. People don't need any more pint glasses," Malone explains.

Peña, another Houston friend and chef poached from the Petrol Station's kitchen, brings the same dedication to the food side of the business. A menu of "elevated pub food" means their grilled cheese is made with gouda, smoked cheddar, and grilled tomato. The Reuben (one of a couple of menu items appropriated from the Petrol Station) uses corned beef beer-braised in-house and beer-soaked kraut. Unapologetic in their carnivorous offerings, they also cater to veg-heads with a quinoa black bean burger. The french fries alone hardly call for ketchup, but for three dollars you can embellish them à la Greek, Asian, or Italian.

Once the garage doors are restored (demolition uncovered tracks in the ceiling), the bar will open up to the vine-shaded patio. In a few years' time, plans for a balcony reaching out over the water will be realized, as the property line extends nearly to the other side of the canal. The Waller Creek Conservancy is working to transform this underutilized artery through Downtown into a series of connected parks and trails, play spaces, and event spaces, inviting artists, tourists, cyclists and pedestrians, and families to enjoy the creek's ecology. Waller Creek Pub House is doing its part to add craft beer enthusiasts to that list.