Eating Out With Kids

Austin's food boom may not be for everyone 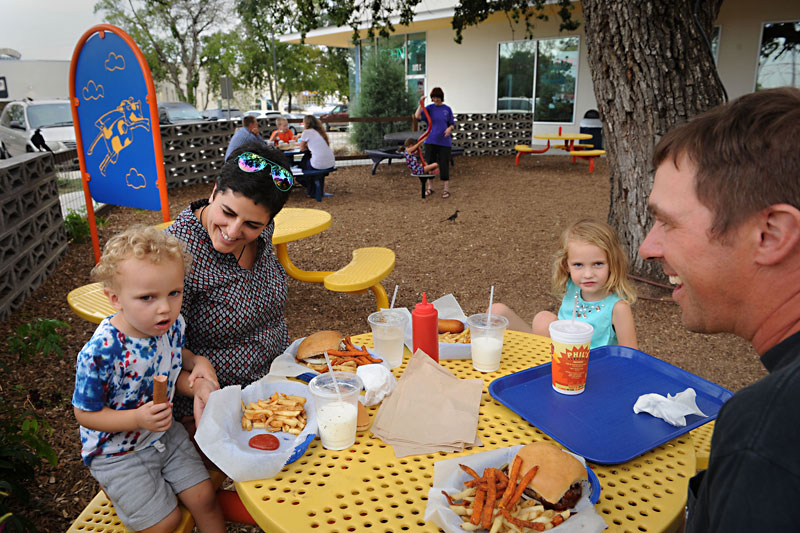 Before I had children, I used to say, "When I have kids, they'll eat what I eat. They'll love spring rolls and egg rolls and things that aren't even rolls but are still delicious. They'll eat pho and fish and that Croatian dish I make with cabbage and potatoes. They'll be open-minded and well-behaved. Eating out with kids will be enjoyable, like taking a walk by yourself, except you're not alone – you're with your favorite people, miniature versions of yourself: kind, tolerant, beautiful, humble." Then I had children and realized how ridiculously optimistic that was. Don't get me wrong; other people appear to have children who enjoy eating bánh mì, but not me. My children enjoy eating barbecue, tacos, and hamburgers. That's it.

You never forget the first time your daughter asks you for wibs. You never forget the second or third time either, when you've asked her to clarify, and she's just shouting, "Wibs. I need wibs so much." You briefly entertain the idea that wibs equals wigs. Your daughter wants a wig. She's chosen lunchtime to tell you she needs multiple wigs. So you ask, "Where will we find these wibs?" And she answers, "At Tiles Twitch, Mama." You realize she means Stiles Switch. She wants to eat ribs.

So you take her to Stiles Switch where she shouts about wibs and eats wibs, and everyone around you is making a face you choose to interpret as, "Look at that adorable shouting 3-year-old!" You eat your ribs quietly, wishing your daughter was a little less enthusiastic about her food, a little more reserved. She touches a rib to her chin and shouts, "My face is happy with wibs on it." This is eating out in Austin with kids.

My children love barbecue, but they have never been to Franklin Barbecue. Occasionally, I bring it up ("Who wants to stand in line for two hours for delicious brisket?"), and their responses are always the same: "Not me" and "I don't want to do that." That's when I remind them of the pregnant woman I once saw leap out of Little Stacy Wading Pool after she saw a squirrel run away with her Franklin Barbecue leftovers. She was screaming, "Not my barbecue!" and I remember thinking, "I've never chased anything for barbecue. That's dedication." I try to spin this in terms my kids will understand: "Hey, kids. If you want the best gummy bears, sometimes you have to be willing to chase a squirrel or stand in line for two hours. In this scenario, 'gummy bears' are a metaphor for brisket." This is when my son says something like, "I want gummy bears," and my daughter says nothing, because she's already eating gummy bears, not listening, and in another room.

Sometimes, when we're not talking about barbecue or eating barbecue, one of my children recommends we get tacos at Tacodeli. And by "recommends," I of course mean "suggests loudly and with whining." My son was basically raised at Tacodeli's Gracy Farms location. He was also born there and conceived there. (Joke! He was born in a hospital and conceived in a bed.) Mathematically speaking, though, my son is 70% black beans, 20% sirloin, and 10% perspiration. Incidentally, Tacodeli was the last meal I ate before my daughter was born and the first meal I ate after she was born. I'm not exactly sure what this means, but I think it means I like symmetry. And tacos.

My kids love Tacodeli so much they will occasionally refrain from whining while eating. And when they do, it's a miracle, a prayer, and a bigfoot sighting all in one. This generally lasts five to 10 minutes, enough time for me to eat one Delibelly and one Pollo en Mole.

Recently, though, we met out-of-state friends at Tacodeli's Rosedale location, and I told my kids beforehand, "Please do not whine, argue, or lick me for 20 minutes. Good behavior gets you Casey's New Orleans Snowballs!" They seemed excited about this arrangement, sat down, and began arguing about kombucha. (Because of course my picky children drink kombucha.) I gave them my best "No Casey's" face and asked my daughter to stop dipping her fingers directly into the queso. She said, "I'm sorry, Mama," and dipped her elbow into the queso. Then my children began kicking each other's chairs while quietly howling. If you have never experienced the feeling of intense happiness that comes from trying to visit with friends from Connecticut while asking your children to stop dipping their body parts into queso, you are missing out! It's like they always say: Life is what happens while you are busy telling your kids, "Stop dipping your body parts into queso."

But mostly when we eat out, we eat hamburgers. I once defined tradition to my son as "going to Hut's every Wednesday." My son may not know that tradition is more than just hamburgers, but he does know that if you get to Hut's at 6pm, you can get a table. My daughter once pointed to a photo of Marilyn Monroe on the wall at Hut's and said, "Boobies!" She then said it four more times. I think this means I am a good parent.

I've always liked Hut's, but when I had kids, I discovered Phil's Icehouse. Phil's has a playground and hamburgers and beer. In other words, Phil's is perfect. The only way Phil's could be more perfect is if it had babysitters. Because, let's face it, parents are greedy. It's not enough for us that our kids are eating and playing. We want someone else to watch them, too. We want what I call the Third Parent – a third person who steps in and tends to our kids' scrapes and snots. I'm not saying Phil's should hire child-care workers, but I'm not not saying that either. OK, full disclosure: I am saying Phil's should hire child-care workers.

On a recent evening at Phil's, my son played with his friends and ate happily. My daughter cried because I said she couldn't have ice cream. (She also said, "mean mama," no fewer than three times.) I tried to convince her that her hamburger was ice cream ("A warm ice cream made of meat!"), but she is now 4 and not an idiot. No child-care workers appeared when summoned.

I now know that eating out in Austin with kids is nothing like taking a walk by yourself. In fact, in many ways, it is literally the opposite of that. How I missed that pre-children says a lot about my misconceptions about parenting in general. There is no silence, and you're never alone. That is both the working title of my memoirs and a decent answer to the question, "How would you characterize your dining-out experiences with children?"

Don't get me wrong. My children are lovely human beings. They are sweet and thoughtful and, for a little while at least, adorably confident in their mispronunciation of the word "rib." They're also completely uninterested in Uchiko's Sake Social menu.

Let me put it this way: My kids know that when I die, they are to say two things about me at my funeral: "She loved us deeply. In addition, she loved deep-fried beets with mayonnaise." It's up to them whether they want to add, "We never willingly went to East Side King. She always had to bribe us. We don't like to try new things, and even though Mama assured us the beets were 'amazing,' we did not believe her. Not even once."

A version of this article appeared in print on August 28, 2015 with the headline: What We Talk About When We Talk About Eating Out With Kids 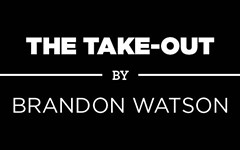 The Take-Out
Priced out 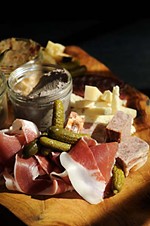