Before Austin became famous for homegrown spicy condiments inspired by the now-25-year-old Austin Chronicle Hot Sauce Festival, the best-known packaged foods to emerge from our city were probably Adams Extract and frozen Top Chop't steaks bearing the Night Hawk brand. Fast forward to 2015 and in addition to hot sauces, Austin is now recognized as the birthplace of everything from NadaMoo vegan ice cream and Pogue Mahone pickles to Sticky Toffee Pudding and Austin Slow Burn queso. The impressive array of artisan foods produced locally usually started with a creative spark in someone's home or restaurant kitchen, but they needed a larger environment in which to grow and flourish. That growth most likely happened in a shared use commercial kitchen, one of several around town. These culinary incubators give aspiring food artisans the opportunity to test out the production and marketability of their product without incurring the great expense of installing a commercial kitchen, while also providing caterers and mobile food vendors a permitted kitchen to call home. We visited a couple of these incubators recently to see what they are hatching. 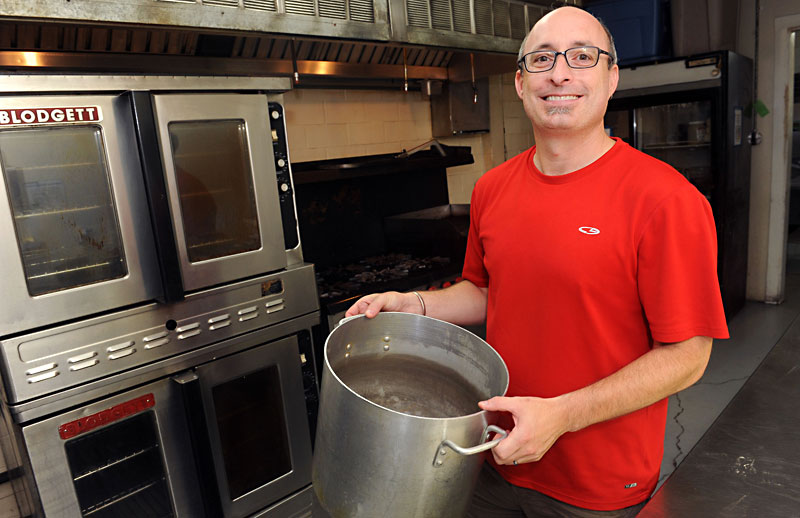 
Back in 1998, Herb Levy helped a friend open a second-story, biker-themed restaurant near the corner of East Sixth and Red River called Knuckleheads. The ill-fated eatery was there and gone in a heartbeat, but hanging on to some of the kitchen equipment set Levy on a career path that continues to be part of his life 15 years down the road. Using that equipment, Levy set up the Just Add Chef kitchen in a conveniently located building in Downtown Austin and got a commercial kitchen permit from the city in 2000. He sent out postcards announcing the availability of a permitted commercial kitchen to every caterer in the local phone book, and to this day, he says those postcards are the only investment in marketing he's ever made. Word-of-mouth has always kept his kitchen in demand, but Levy has still never quit his day job with Tableau Software.

In the early days, Levy says he mainly hosted caterers and the occasional pioneering mobile vendor such as the Best Wurst, and everyone who used the kitchen worked under the one permit for the building. However, as the local food business grew and changed, the city implemented more rules and regulations. Within five years, each business had to have its own permit and inspection schedule. Levy left Downtown to take over the former home of Go Go Gourmet in a 1,500-square-foot space on the I-35 northbound access road in 2008. Over the years, he has acquired and sold equipment depending on the demands of clients. No one needed the jacketed soup kettle so it's gone now, but commercial mixers and a dough sheeter are very useful for bakers. These days, Levy says his revolving clientele breaks down into three main categories: caterers and personal chefs, food artisans, and mobile food vendors.

"I've always had a couple of anchor tenants who take up lots of time and others who work around them," Levy explained. Some of his recent anchor tenants include Nimble Foods, Micklethwait Craft Meats, and the Peached Tortilla. "I lost the Peached Tortilla when Eric moved up to brick-and-mortar in the spring," Levy reports, adding, "I either lose them when they give things a shot and figure out it's not going to work, or I lose them when they outgrow the limits of this space like Sticky Toffee Pudding or Cake & Spoon, and move up to the next level." Just Add Chef offers kitchen cooking stations, a dishwashing area, plus some dry and cold storage, but the air conditioning is limited. Each new tenant gets a crash course in the hard, hot, physical work involved in sharing cooking and food storage space. While Just Add Chef has established hourly rates, Levy says he evaluates each new potential tenant and tries to offer some flexibility to start-ups. "Although the first thing new people usually say is they'd like to rent kitchen space between 9am and 5pm, Monday through Friday, and I have to tell them those blocks of time are pretty much always spoken for," Levy advises. 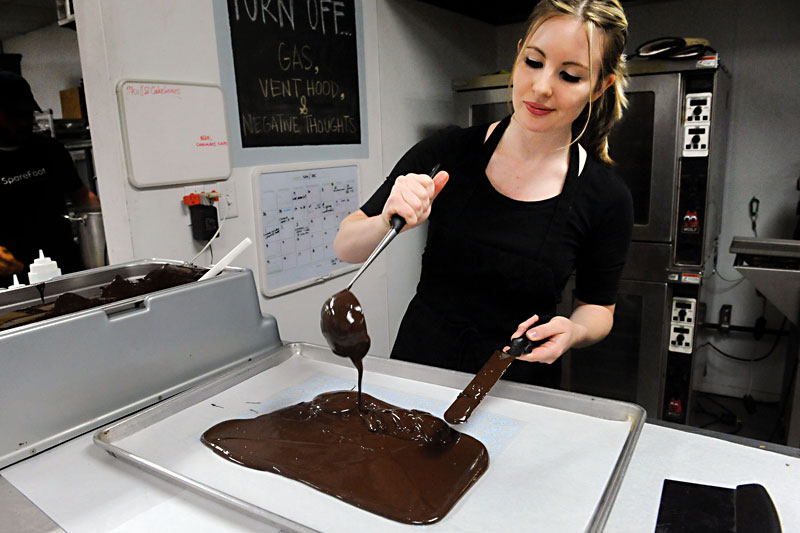 
At Capital Kitchens, caterer and private chef Trish Wesevich not only offers prospective tenants a kitchen in which to work and grow their company, but working in the space comes with business development services, as well. For instance, she cultivates relationships with local retailers to assist in product placement and helps tenants make connections with potential investors, co-packers, food technology, mentoring, and social media groups. At any given time, she'll have more than 25 tenants sharing space in the 3,600-square-foot warehouse kitchen in a South Austin business park. Like Herb Levy, her clients break down into the three categories of caterers, artisans, and mobile vendors, and she'll have both anchor and revolving tenants in the mix.

Some recent success stories Wesevich points to are Daily Greens, a fresh juice vendor that quickly outgrew her kitchen and is now in an East Austin production facility; and Good Seed Burger, a wildly popular vegan burger patty company that parlayed an introduction to the Incubation Station into wider distribution and preparation by a co-packer. Sway Water bottles their flavor-infused beverages at Capital Kitchens for distribution to local stores and farmers' markets, while Yeti Frozen Custard began making custards for their trucks there as well, and now packages pints to sell in local specialty markets. There's always a healthy contingent of mobile food vendors working at any time – Hand Helds, Chico & the Fox, Brown's Bar-B-Que, and Toaster, to name just a few. "We hated to lose Chaat Shop when Josh [Thomas] took the Green Pastures job. His food was so good," Wesevich says.

In an effort to provide more support to mobile vendors, Wesevich is one of the founders of the Austin Food Trailer Chamber, along with Brian Erickson of Trucklandia Fest, Joel Paprocki of Insure My Food Trailer, and Phyllis Kruciak of the Celia Jacobs Cheesecake Experience. The nonprofit group fosters conversation about professional training and business growth, creates social environments for mobile vendors to interact, and provides the opportunity to address issues important to the industry with a unified voice. Wesevich is also looking to expand her kitchen operation to service food businesses more effectively. She's applied for a $100,000 Chase Bank Mission Street grant which she would put toward the development of a second kitchen space with more cooking stations, increased dry, cold, and frozen storage, and a convenient loading dock. She finds out about the grant in September, but win or lose, Wesevich intends to keep growing and providing a place food professionals to grow along with her.

Here’s a current list of some of the shared use commercial kitchens in the Austin metro area, listed with the owner or manager. Each has it own price schedule, set of available equipment, and rules of engagement.