Repeat after me. You are bright, you are vibrant, and you are capable. You are quite literally hot stuff. Don't ever let anyone treat you like a sidepiece. If you work hard, you can be the center of an entrée that includes flank steak and flautas. It's a beautiful thing. For Andria Millie, treating salsa right is the primary thing. "I really think it needs to be honored," she says.

Millie honored her salsa by naming it for the Spanish word "crop," or more specifically "cultivation." Using traditional techniques and heirloom chiles while sourcing locally from the city's many urban farms, Cultivo salsas are citrusy, rich, and layered, showcasing deep flavors and thought. After extensive travels through Mexico and 20 years in the restaurant industry (including her current front-of-house gig at Dai Due), Seattle native Millie has had the advantage of watching chefs hone and highlight the flavors of individual ingredients in the best possible way. It's this careful, tender treatment of each ingredient that makes Cultivo stand out.

For example, to prepare Cultivo's original red salsa (honorable mention in the 2013 Austin Chronicle Hot Sauce Festival), Millie quick grills tomatoes and then moves them off the fire to slow smoke. She then roasts jalapeños, habaneros, and garlic, while grilling larger chiles and onion. Coriander and pepper are toasted and then ground by hand in a molcajete, and additional onion is caramelized. After that, the ingredients are processed together before adding the final touches of raw onion, lime, and cilantro. "I really think that when done right, respecting the original way that it's supposed to be made, you can make it a dynamic enough item that it's worthy of building a dish around, as opposed to it being an afterthought," says Millie.

This rings true for her green salsa, available year-round like the red, as well as her seasonal offerings which include an heirloom tomato pico de gallo, a chile piquin chimichurri, and a springtime green pico, made with green tomatoes, shallots, and Mexican mint. According to Millie, the possibilities for salsas are endless. Why not roast a pork shoulder in it? Prepare a steak and top with pico, or perhaps an over-easy egg on top of green sauce. "If it inspires you to make something at home that would otherwise be mundane, then that's awesome," she says.

Currently available through Farmhouse Delivery and at In.gredients, Millie hopes to expand her operation, but it isn't her top priority. "I definitely want to showcase it as a product for the people in my immediate community first and foremost," she says. "If you're going to move into a community like I have, I want to be authentic and available to the locals." Moreover, she wants to change the way people think of salsa, less of a side note and more of a centerpiece. After all, there's nothing more central to conversation than the act of preparing and eating food, and nothing brings about conversation better than a great meal. "Over the years, I made it just for fun," she says. "I found that it was really awesome to just have a ton of people over and watch them gather around a bowl of salsa. It has the power of bringing people together." 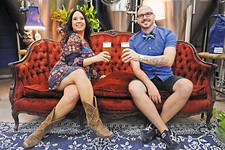