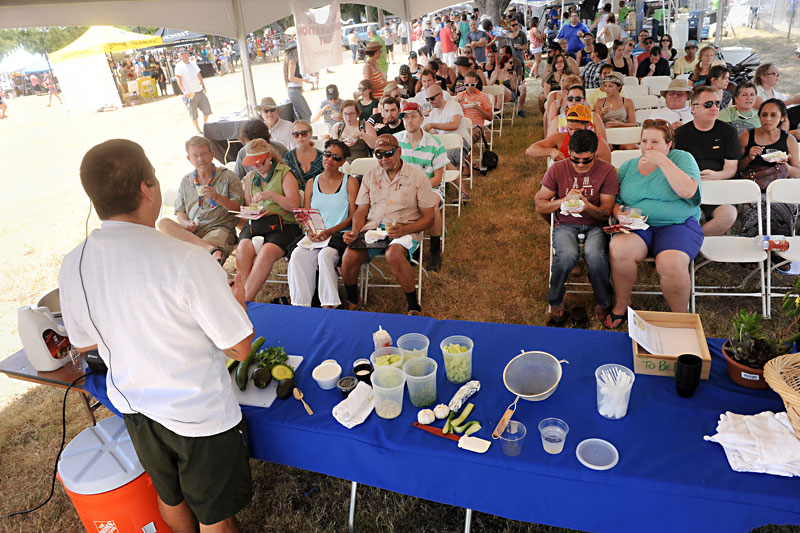 Year after year, you have done so much to support the Capital Area Food Bank of Texas, the least we could do is give you a few recipes. It's our pleasure to bring you a trio of heavyweights making salsa far outside the jar. Claudia Alarcón returns to host and emcee and the next generation of culinary superstars – students at the Le Cordon Bleu College of Culinary Arts – will be providing mini-demos between the headliners.

12:30-1:30pm: Chef Iliana de la Vega of First Plates award-winning El Naranjo starts the day with a salsa de tomatillo y naranja. De la Vega first gained international acclaim as the owner and chef of El Naranjo in Oaxaca, Mexico, earning accolades from The New York Times and Bon Appétit. After political unrest forced her to sell that restaurant, she moved to the U.S., eventually settling in Austin. In Austin, de la Vega and husband Ernesto Torrealba opened the El Naranjo trailer while de la Vega worked as a chef instructor at the then-new Culinary Institute of America in San Antonio. The trailer eventually led to a brick-and-mortar on Rainey, where de la Vega is still setting the bar for Austin dining today.

1:30-2:30pm: Chef Paul Macry from Le Cordon Bleu College of Culinary Arts takes the middle slot with tropical fruit salsas for shrimp or chicken. The former chef at Austin Country Club, Macry has been sharing his expertise with aspiring chefs for more than a decade. His technical acumen and vast experience with classic and contemporary cuisine make him a natural instructor for the international component of the Cuisines Across Cultures program. No stranger to heat, Macry is a cooking demo stalwart and a frequent preliminary Hot Sauce Contest judge.

2:30-3:30pm: Chef Rob Snow of Greenhouse Craft Food and the Scarlet Rabbit wraps the demos up with "Sixto" salsa. Snow began professional cooking at FIX at the Bellagio in Las Vegas before returning to his home state of Texas. After stints at Fleming's and Vintage Villas, Snow became the executive chef of the Mansion at Judges Hill. In 2013, Snow brought farm-to-table cuisine to Round Rock as the chef/owner of Greenhouse Craft Food. Last year he opened the Scarlet Rabbit with former Quality Seafood chef Rich Taylor. Snow's commitment to bringing local sourcing and elevated cuisine to the suburbs proved good food has no borders.