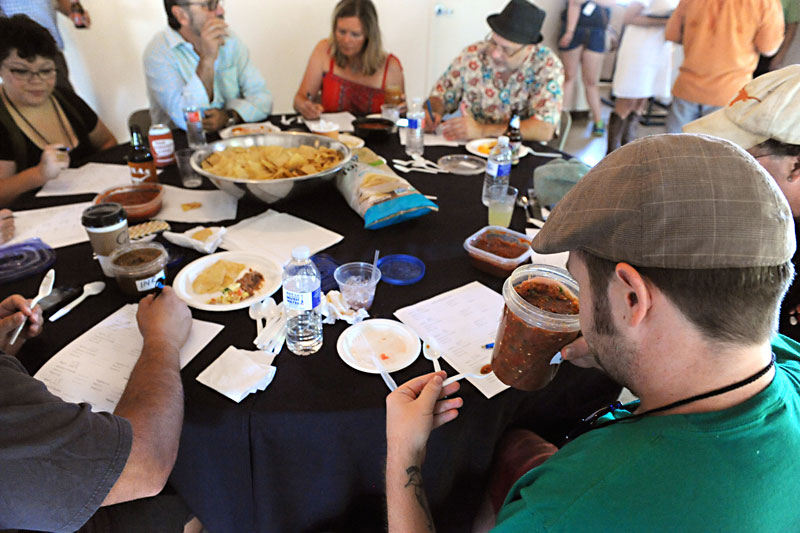 Three-time James Beard Award-winner Walsh is the author of The Hot Sauce Cookbook and The Tex-Mex Cookbook, and a partner in El Real Tex-Mex Cafe in Houston's Montrose neighborhood. Walsh is also a board member of Foodways Texas, a nonprofit dedicated to preserving Texas food history headquartered at UT-Austin. His upcoming book, The Chili Cookbook, will be released in September by Ten Speed Press.

Clemens is a graduate of the California School of Culinary Arts and has written for Gourmet, Saveur, Wine Enthusiast, Los Angeles magazine, and Beer Advocate. He is the author of the bestselling The Sriracha Cookbook and The Veggie-Lover's Sriracha Cookbook, and co-author of The Craft of Stone Brewing Co., all from Ten Speed Press, and is a Beer Judge Certification Program-recognized beer judge.

Disbrowe is a food writer whose work has appeared in The New York Times, Food & Wine, and Cooking Light, among others. She previously served as the food editor of Restaurant Business magazine and regional travel editor of Southern Living. She is the author of four cookbooks, including Real Cajun with Donald Link, which won the 2010 James Beard Award for Best American Cookbook.

By day, Rayo is a Latino engagement strategist, and by night he's a taco journalist. Through his contributions to the famed Taco Journalism blog, fans go behind the scenes with the trailers and taqueros who make it all possible. He and fellow taco blogger Jarod Neece are the co-authors of Austin Breakfast Tacos: The Story of the Most Important Taco of the Day and the upcoming Tacos of Texas to be published by the University of Texas Press.

European-born Garrido began his cooking career under Southwestern cuisine pioneers Stephan Pyles and Bruce Auden. For many years, Garrido was executive chef of Jeffrey's restaurants in Austin and Washington, D.C., and was also the former executive chef of Chuy's Comida Deluxe and owner of Garrido's. Recently he took over the former chavez space under the temporary name of dine. A new concept will be launched mid-September.

Executive chef and co-owner of the highly acclaimed Vespaio and SoCo hot spot Enoteca Vespaio next door, Lazarus has long been recognized as one of Austin's top toques. After more than 35 years of cooking in Austin, one of his newest interests is organic gardening, raising herbs and tomatoes to be featured in his popular restaurants.

A Wharton, Texas, native, Berrios blends her marketing and cultural anthropology background as the Texas local forager for Whole Foods Market's Southwest Region. Her career with Whole Foods began as a cashier, but her undying passion for bringing people together through food led her to her current role. Berrios is motivated by the passion and spirit she sees in small producers and artisans across Texas.

After a stint as a frequent contributor, Watson formally joined The Austin Chronicle News staff in 2013, leaving a career in product management. Watson went on to become the Food editor and primary restaurant critic in 2014. This is his first year on the judging panel; he hopes he can keep up with the pros.