Giving new life to the end of the meal 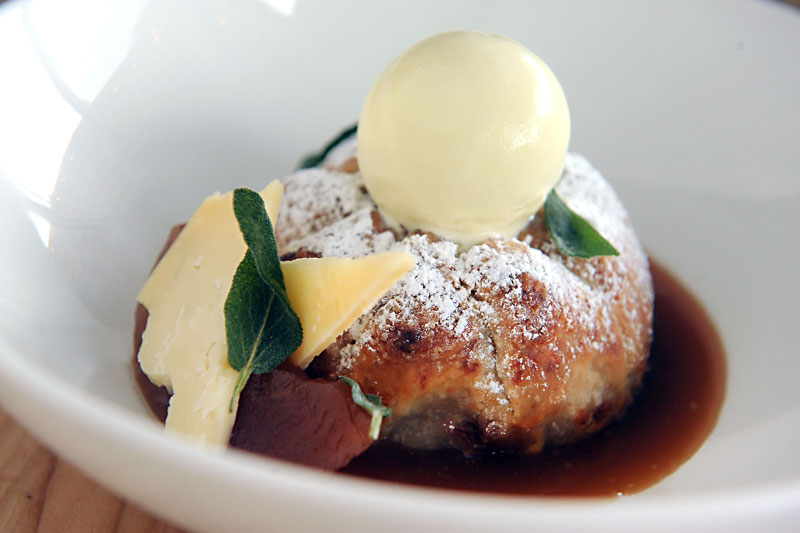 If you lived in Jane Austen's day, a typical British dinner party might have ended with an apple Charlotte. Not unlike today's apple pie, this was a dish of milk-soaked bread layered and baked with sugar and buttered apples. Meanwhile, over in Paris, Marie-Antoine Carême and his disciples were revolutionizing the art of dessert with chocolate éclairs, mille-feuilles (known here as Napoleons), and multilayered Genoise cakes. So profound was Carême's impact on haute cuisine that the delicacies and recipes credited to him today are still at the root of European cookery.

Over the next hundred years, dessert fashion changed little, varying only by place. In America, mousses and soufflés became all the rage at the chic dining establishments of New York. While out on the frontier, simple cream-covered coddled apples cooked in a Dutch oven with lemon and butter made housewives seem like miracle workers. As refrigeration became more common, ice creams, sherbets, and parfaits (also known as icebox cakes) set the standard.

Then there were the Eighties and Nineties with their clumsy forays into worldly sophistication. Remember the tireless cheesecake, the ubiquitous flourless chocolate torte, and johnny-on-the-spot crème brûlée? There was a time when you could not eat out without being assaulted by one of these clunky confections at the end of the meal.

Thankfully, we've evolved. These days, desserts are so much more than that. This is thanks in part to a growing recognition and respect for pastry chefs in the food industry. As America becomes increasingly obsessed with gastronomy, appreciation of dessert is also growing. No longer sidelined as an afterthought, talented pastry chefs are emphasizing desserts as an essential element of dining out. Desserts are, in the words of Launderette's pastry chef Laura Sawicki, "an essential part of one continuous story that starts from the moment you walk in a restaurant's door."

It does not hurt that chefs and pastry chefs alike are breaking the dessert mold and challenging our ideas about how we imagine that final course. Inspiration comes from around the globe: lychee, durian fruit, and black rice are among dessert's new darlings. Even vegetables are fair game these days. Think Paul Qui's avocado "qui" lime pie or Fixe's sweetened red beans and rice fritter. Zucchini and corn are jazzing up menus all over town. Cuisine's new confections marry texture, consistency, and culinary technique in ways desserts never have before. The results are invigorating and ... oh so sweet. Here is our list of essentials.

The folks at wink have been serving this for years, but that does not make it any less relevant to current trends. This dish has all the elements that define the new landscape of desserts: juxtaposing textures and flavors to finish the meal on an elegant note. Or maybe it is just that lemon meringue never goes out of style. This dish is essentially a miniature Pavlova cake, a dessert made famous when it was cooked in New Zealand in honor of a performance given by the Russian ballerina Anna Pavlova. A hard meringue shell is the vessel for tart lemon curd and fresh berries. Candied lemon peel and a light lemon glaze bring it all together. I could probably eat three, but who's counting?

Sure we'd all love to sample the piña colada semifreddo with coconut snow and avocado ice cream at Congress. But getting to that point can require a second mortgage just to pay the dinner bill. A more approachable way to taste-test the creative confections of pastry chef Michelle Arcilla Hall is through Bar Congress or Second Bar + Kitchen, where a $3.50 lemon poppyseed snickerdoodle makes a perfect end to any meal. Two soft poppy seed cookies sandwich a dollop of lemon buttercream for a less-is-more dessert that goes with any meal.

Gardner's minimalist constructivism carries over to dessert for the un-chocolate lover. A dreamy milk chocolate semifreddo is topped with buttermilk ice cream, thin wafers of dehydrated chocolate mousse, and a nutty streusel. This is not a death-by-chocolate dessert, but a lighthearted marriage of chocolate and cream, sweet and tart, creamy and crunchy. Delicate enough for a sweaty summer evening but substantial enough to finish a winter meal. Team Gardner put considerable thought into their small but well-curated menu of sweets, and like everything else at this quirky veggie-centric restaurant, desserts are always an adventure.

Popcorn and a Movie at Swift's Attic

Who doesn't love popcorn and a movie? These twin towers of entertainment are transposed onto a new palette at Swift's Attic where pastry chef Callie Speer has developed inventive desserts that celebrate American gastronomy. Homemade toffee-esque candy bars form the centerpiece of this pop-culture dessert. These are topped with buttery popcorn-flavored ice cream and caramel corn, and drizzled with root beer gel. The whole bite is a study in nostalgia. Speer's other creations are a playful homage to American comfort cravings. Commander Crunch chocolate mousse or Funfetti tres leches, anyone?

Laura Sawicki has made a big name for herself over the past several years. First as the pastry chef at Sway, where she introduced diners to white chocolate semifreddo accented by sweet sesame syrup and mango sorbet; and now at Launderette where her desserts continue to wow crowds. Among her innovative seasonal confections are a beet cake with goat cheese mousse, and blackberry yogurt parfait topped with chamomile ice cream. But the dessert we just cannot get enough of is a modern take on an old American classic: the apple pie and American cheese. But this is not your grandma's apple pie. Sawicki's version is made with caramelized apples, baked in light-as-air puff pastry, topped with a dollop of homemade sage ice cream. Clothbound cheddar and a pool of sticky salted-caramel sauce provide just the right accent. The whole bite is memorable and addictive.

This dessert bears all the hallmarks of summer. Cooling blackberry shaved ice tops a creamy sweet-corn ice cream. Crisp caramel popcorn adds unexpected structure. Underneath it all are crackly little bits of homemade toffee. It is crunchy, creamy, and icy all in one bite. Like the rest of the talented kitchen staff of Odd Duck, Susana Querejazu does wonders with this ever-changing dessert menu, concocting sweet endings – like a hazelnut and sunchoke éclair – that never cease to surprise.