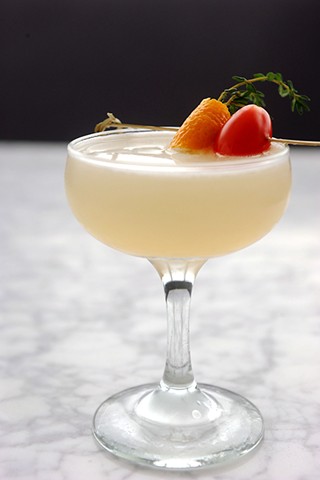 There's no better redemption for the sins of the previous night than an indulgent brunch with a refreshing brunch cocktail. An inexpensive carafe of orange juice and bubbles always has its place, but elevated brunch cocktails are Austin's new attraction. Local bartenders are nodding to our city's obsessive brunch culture by stirring up drinks well beyond the classic mimosa and Bloody Mary. Try one of these primped hair-of-the-dogs alongside hearty egg dishes and pastries this weekend.

Newcomer VOX Table stands out with their inventive brunch-friendly bevs. Lead bartender JR Mocanu stirs up our fondest childhood memory with Saturday morning 'toons. "Spoon in hand and it's a blissful moment ... cartoons and cereal," he reminisces as he shakes up a frothy concoction of Red Handed bourbon, vanilla bitters, Demerara syrup, and – the kicker – cereal-infused milk. The drink triggers instant nostalgia with its "just cuz" side of Cinnamon Toast Crunch.

The VOX team takes it a notch up the cocktail nerd scale with Sif's Song, which Mocanu describes as the "perfect cocktail pairing for any seafood brunch." They begin by pressurizing tomato with akvavit, a Scandinavian liquor flavored with caraway seeds. The fruity, umami-loaded infusion is shaken with gin, lemon, and Scandinavian spices. The lightly sweetened and curiously complex drink is served straight up with a skewer of thyme, lemon zest, and a cherry tomato. Mocanu suggests pairing it with the crab Benedict.

laV's cocktail pairings for their nouveau Français fare are equally innovative. A floral orange marmalade stars in the Breakfast Martini, with vodka and Cointreau playing supportive roles. The Morning After (gin, Suze, and absinthe), a play on the Corpse Reviver #2, helps brunchers ease into the morning. Meanwhile, the distinct Coffee Manhattan is a smooth and nutty rye drink with an Italian twist. Bartender Casey Petty notes that the coffee-infused Meletti amaro is "literally intended to aid in digestion as well as relief from other maladies – hung over much?"

Perla's brunch concoctions also aim at settling the stomach. Assistant beverage director Daisy Ryan recommends the Rich & Famous, which combines Aperol (a bittersweet Italian aperitivo) and Chartreuse (an herbal French digestif). The combination of herbs and other botanicals not only shakes off the fog but also wakes up the palate to conquer luxurious dishes like the lobster omelet. And because this is Austin, they also offer a rotating "Frozen Delight."

But even with Austin's expanded brunch toolbox, there's still plenty of room for the classics. Weather Up boasts four intricate, seasonal Champagne cocktails that are intentionally lighter and brighter. Barman Brian Floyd explains that these bubbly drinks not only make "a great aperitif," guests can "enjoy a couple without catching a hard buzz at noon." Two of their summery sippers include the Cry Baby (rye, blackberry mint, fresh lime juice), and the Smarty Jones (gin, strawberry jasmine, grapefruit juice), both full of refreshing, juicy flavors that cut right through the richness of Weather Up's raclette and pâté.

Finally, for die-hard Bloody Mary fans, laV offers a deeply smoky and vegetal version that's enhanced by fire-charred chiles. The rim is dusted with za'atar, a complex Middle Eastern spice and herb mix. Trace at the W pulls the essence of Texas barbecue into their Brisket Mary, which is exactly what it sounds like. Lead libationist Dustin Courtright first experimented with brisket infused whiskey (aka briskey) at home. "Nothing is more Texan than smoked brisket ... you need a lot of flavor to stand up to the heavy foods at brunch," he explains. He now uses George Dickel rye to infuse the smoked meat, to which he adds Zing Zang, Pearl Snap, and a Pogue Mahone pickle.

We won't cast side-eye if you are still gnawing on celery stalks, but maybe it is time to step your brunch game up. Just because you're being lazy this weekend doesn't mean your drink has to be.