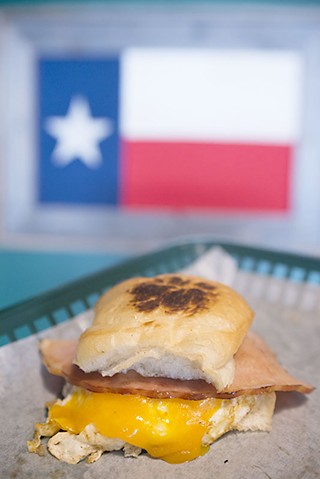 I was supposed to write this piece more than a year ago, but fate (and a burglar) had other plans. On Saturday morning, March 8, 2014, Texas Honey Ham Company in West Lake was on fire, the result of a burglary-arson. As a writer on deadline, this was an extremely upsetting event, because that meant that I was suddenly out of a story. As a diner who had grown rather fond of this sweet little shop on Bee Caves Road, I feared that the community faced an enormous, potentially irreplaceable, loss. I first learned about Texas Honey Ham through Deana Saukam, whose Facebook page one morning displayed a tableau of breakfast tacos and a generous slice of ham nestled into a pancake. Curious, I went to the shop to refuel with a breakfast taco after a morning run on Town Lake. All it took was one visit to convince me that I'd been missing out on 10 years of exceptional breakfast tacos. (Side note: West Lake is an alien hamlet to me. Beyond my understanding that they've got a better school district and a generally tonier populace, I've never been particularly curious about what's going on along that stretch of Bee Caves Road from MoPac to 360. Shame on me, it turns out.)

Texas Honey Ham is one of those iconic gathering places endemic to small communities. Photos and newspaper articles adorn the walls and are relevant to and reflective of the clientele. Patriarchs clap shoulders jovially and discuss the latest doings on the links or Junior's great catch at Friday night's game. Mothers share tips about ski vacations or Montessori schools. Teen girls gossip while teen boys jostle one another. These kinds of gatherings can happen at any given cafe in any given town; but what brings people back is the food.

Texas Honey Ham is open for breakfast and lunch, through 6pm (so, you could squeeze in an early dinner or order in bulk to serve later). The breakfast tacos ($1.99) are pretty standard, customizable with any two base items including eggs, bacon, sausage, and the cafe's signature baked potato hash (basically, mashed loaded baked potatoes; it's delicious). They were an early favorite in my initial visits, but I'm also a fan of the ham sandwich ($6.49 full, $4.29 half), which is a straightforward version of the classic, served between generous slices of griddled white or wheat bread. Order a side of shells and cheese ($2.70) or apple slaw ($2.49) and you've got an appetizing lunch that transcends the workday.

Cold days are well suited for ham bone soup, which marries seven kinds of beans and pulled pork for a savory, umami-rich stew that hits all the comfort food receptors. It's a special treat atop the house Frito pie ($4.99 small, $6.49 large), which also includes pulled pork, shredded cheese, and house-made honey barbecue sauce (I like to add a few dashes of hot sauce to mine). Steer clear of the Frigas ($6.99), though, which are simply too Frito-forward to be a successful interpretation of migas.

On my first visit back to Texas Honey Ham after it reopened back in September, I was pleasantly surprised to see that nothing had changed in the shop, from the layout to the menu, to the quality of the food. Said Rob Siller, who co-owns the shop with his friends Kelly Weiss and Trent Hunt, rapping his knuckles on the upgraded stainless steel counters, "You know why it's all the same? Because it works."

A version of this article appeared in print on June 12, 2015 with the headline: Don't Call It a Comeback

Fantastic Beasts: The Secrets of Dumbledore
Sloppy scripting breaks the spell of this bloated sequel