Sambhar in the City 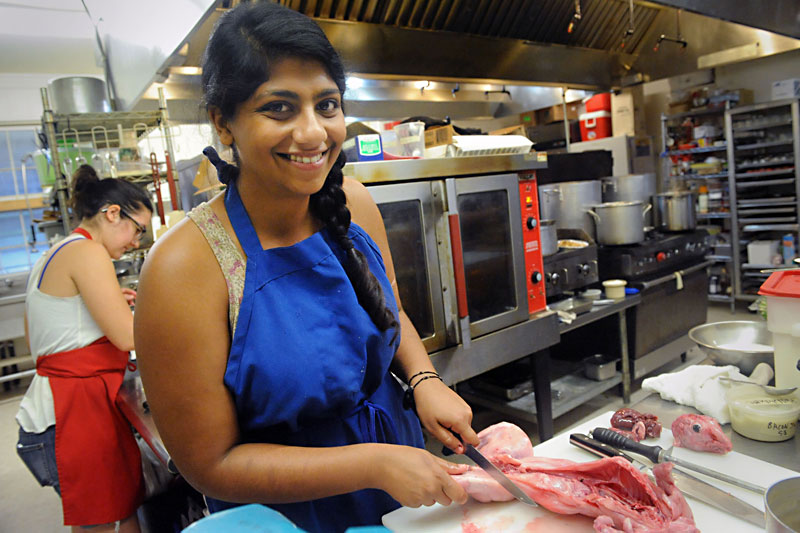 Deepa Shridhar's teen rebellion was a bit different from many of her peers. "I was sneaking in meat when other kids were sneaking in liquor," she says. Since meat was strictly forbidden inside her family's South Indian Brahmin household, she would hide bites of charcuterie in a cooler in the garage, where she would slip away to secretly savor them. "I don't think they knew about it, but that's when I realized what I really wanted to do."

Shridhar's family immigrated to Dallas from India when she was 4 years old. Food was always a huge part of her upbringing. "We were very poor when we first came to this country, but the most important thing was that we still had a great meal," she remembers. "We always had a big garden and we were eating organic and local before I knew that was a thing to do."

The most commonly prepared dishes in her family's kitchen were three classical South Indian rice dishes. Kuzhambu, also known as sambhar, is a lentil-based dish prepared in spicy tamarind broth and served with rice. The second is rasam, a tomato broth with ghee garnish and fried curry leaves, which is still Shridhar's favorite. The third is thayir saadam, or curd rice, made by mixing rice and a water-buffalo yogurt recipe that has been passed through the family for generations.

By the time she was 10, Shridhar was cooking for herself. "I was very lucky; my parents gave me a lot of freedom," she says. "I was always highly sacrilegious when it came to food because I liked the idea of mixing American flavors with Indian flavors.... I feel like that's always been my palate."

After studying film at Austin College in Sherman, Shridhar decided to start up an underground catering company, Deepa Cooks, to earn money while working on a documentary. Her first customer was a family friend, and business gradually picked up through word-of-mouth. Shridhar admits it wasn't always smooth sailing. "I would find myself drying pasta all over the place at 3 in the morning and I was just like, 'What are you doing?' It was just me, not knowing what I was doing at all!"

By then, Shridhar had decided Italian food was her passion. "There was definitely a time where I didn't really connect with Indian food," she says, "but I think it's one of those things where the more you're away from it, the more you really appreciate where you're coming from." So when her dad suggested she seek an apprenticeship in a restaurant, Shridhar went straight to a celebrated Italian kitchen – Dallas' Lucia. Executive Chef David Uygur became her first kitchen mentor, and "farm to table" became a part of her vocabulary.

From there, Shridhar decided she needed to learn how to butcher. "I thought that was really the next step in becoming a wholly realized cook, I guess." An Internet search led her to Dai Due (then a supper club and butcher shop pop-up at the farmers' market) and a move to Austin. "I would stalk Jesse Griffiths on the weekends, handing the same stupid résumé to him, and he would just look at me like I was crazy," Shridhar says with a laugh. That persistence paid off. Griffiths finally invited her to stage for the day, then offered her a full-time job the next day.

"When [my parents] realized I wanted to be a butcher, that was a hard pill to swallow," says Shridhar. "But at the end of the day, they've been so supportive, and to their credit, they really understood that this is what I wanted to do.... They're my biggest supporters now, so I'm really, really grateful."

While she learned the art of butchering from Griffiths, he also further opened her eyes to the wonder of each season's bounty. "I love the idea of being able to take a bunch of vegetables and make something beautiful," says Shridhar. "I believe there's a marriage of meat and vegetables that's perfect. And I believe I'm healthier and better for having both in my life. And Jesse showed me that it was possible."

Shridhar began staging at Lenoir while she was still at Dai Due, then moved up through the ranks. "Eventually, there was a day when I had to say goodbye to Dai Due, which was not easy," she says. "I went on to work for Todd [Duplechan], who taught me a lot about how to plate like a fine-dining cook and was ever so patient with me as well." She soon began to devise her next culinary endeavor. This time around, she had a much sturdier foundation of knowledge and experience upon which to build.

"I started to have a really good idea of what I wanted, and once you have an idea of what you want, it's really difficult to keep creating for anybody else," says Shridhar. She began to visualize a supper club where Indian flavors and ingredients were transformed by nontraditional techniques and informed by other types of cuisine. "I think that when people think of Indian food, they think of cream sauces and really heavy naans," says Shridhar. "I want to be able to make fine-dining Indian food that just hasn't been done.... There's all kinds of exciting food that no one even knows exists!"

She named her supper club Anjore, after her grandfather's village. "Probably one of the biggest influences in my life was my grandfather," she explains. "He was a tastemaker of sorts in India. He was this guy who everyone knew, and he lived to be almost 100. He was one of those people where if he wanted something, he would only get it at a particular shop on a particular street."

Since men do not traditionally cook in Indian households, Shridhar's grandmother dutifully cooked for the self-appointed family food critic. "He needed his food very exact, and she would comply and bust out these insane meals," Shridhar remembers with a smile. Her dad, however, does cook frequently, and he also maintains organic gardens which yield herbs and produce Shridhar uses on the Anjore menu – Indian white pumpkin, borage, curry leaves, roses.

Anjore's first dinner, a Cajun/South Indian-themed feast, took place in January 2014. Since then, she's continued to host ticketed events, each one showcasing an entire animal in various courses. Last fall, a goat thali dinner started with house-made pickles, jams, and charcuterie, before a rainbow of thali was presented: coriander rice, yogurt-and-mint-marinated goat, mustard-greens raita, pickled white pumpkin, and more. A biryani dinner featured several versions of the rice dish, with various rotis, chutneys, and raitas, paired with beers from Whip In's Kamala Brewing. Her next event will be an antelope feast held on June 20.

In September, Shridhar opened a stand at the Texas Farmers' Market at Mueller to sell a few simple items – starting with her naan croissants, an invention that quickly became a signature item. ("Much to my dismay," she admits of the involved pastries.) She also began selling bags of jaggery granola, containers of her garam masala blend (made using herbs from both her father's garden and HausBar Farms), ghee (clarified butter she renders and strains throughout the course of a day), and containers of her family's generations-old yogurt (whose recipe has now made its way through the Dai Due and Lenoir kitchens).

Anjore began to grow quickly, and Shri­dhar now employs six cooks and can be found at four farmers' markets with a full kitchen and grill setup (SFC Triangle Wed­nesdays; SFC Downtown and TFM Lake­line Saturdays; and TFM Mueller Sundays). In addition to her packaged items, she features weekly specials which she emails to her mailing list before the weekend. Farmers' market shoppers can enjoy Anjore breakfasts made with the very same raw materials they're purchasing from farmers.

"We're uber-local, and we get that from Jesse Griffiths for sure," says Shridhar. "We don't even use any outside fat, and if we do, it's the pecan oil from the pecan farmer that I know. We have special relationships with farmers, and that all started at Dai Due." Recent farmers' market offerings include miso-and-pea-shoot pork curry kati rolls with charred lentils; Kashmiri dum aloo with ghee-fried potatoes, chile-marinated curry yogurt, Texas rice, fried chicharrones, and sour pickles; and buttermilk griddle cakes with cultured lemongrass butter and salted sugarcane syrup. Shridhar also recently debuted naan pizzas at her Wednesday night spot at the SFC Farmers' Market at the Triangle.

"We are looking to brick-and-mortar – that's our end game for sure," says Shridhar. "But I don't think I ever want to give up the markets. There's something great about being at the market. Our farmers are honestly our rock stars, and I do not want to lose that connection."