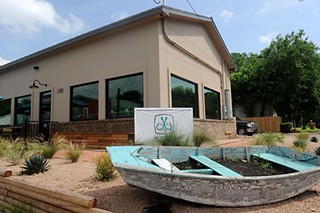 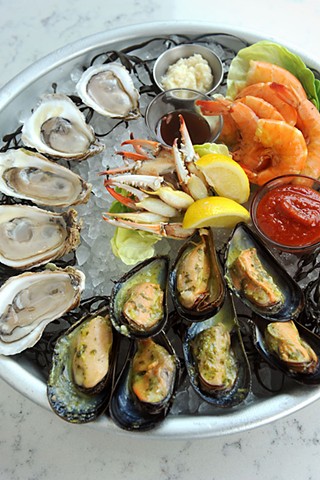 I'll start by saying this will be a mixed review, although I am not quite sure "mixed" is a distinction that matters in hospitality. Pavlovian responses only work with consistency. If we are to develop cravings for a restaurant, they have to be able to deliver that same culinary high, time and time again. One bad experience is all it takes to break that spell. 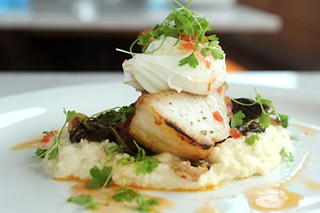 And Mongers Market + Kit­chen does do its best to charm. Its cottage-y nautical look is tough to pull off without looking like the Party City beach aisle, but they manage a strikingly contemporary space. The strung shell dividers separating the small dining room from the restrooms, coiled rope chandelier, and sea glass hues all say "seafood," without resorting to excessive cliche. That sort of salt-worn freshness is exactly what a fishmonger wants to convey. 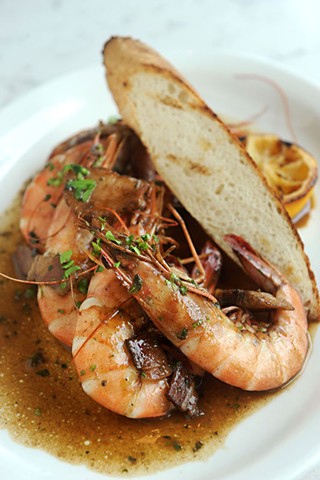 And on the less "mixed" visits, the interior matched the food. East Coast oysters ($3 each) were plump and mild; tuna ceviche ($14) was bright from kabosu and ginger. There's a Gulf focus on many of the flavors, but chef Shane Stark's time at Kenichi and Paggi House shows in a travelogue of ingredients. Burrata panzanella ($12) is unorthodox but shows range. The Grilled Little Gem ($9) deconstructs Caesar salad, but is nowhere near as boring as that implies. 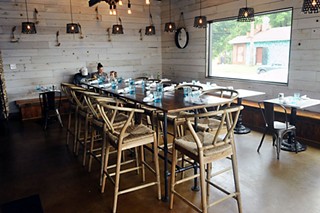 The Gulf, though, is a solid anchor. The smoked fish dip ($8) is pure Florida Keys, pickled fresno chiles subbing in for hot sauce. It was served with crisp house chips, sprinkled with some sort of powder (without any trace of acid, we were not confident in calling them salt and vinegar). Stark's menu then travels down the coast. PEI mussels ($14), using a surprising touch of fennel, nods to New Orleans with andouille. Tangy Alabama fried green tomatoes shine in a greaseless crab cake "sammy." "Angels on Horseback" gussies up the family reunion staple, and are perhaps the best distillation of Stark's voice. It's a smart deconstruction too – the oysters are breaded in cornmeal, a pork rillette stands in for bacon, and pecan crème fraîche is drizzled on the whole shebang – but it's still cozy.

All that could have added up to making Mongers a regular neighborhood haunt. It's not exactly an everyday indulgence, but the price points aren't overly prohibitive. A reasonably priced wine list, decent local beer selection, amiable service, and a sunny patio (plus parking) make Mongers appealing for repeat business. But then that spell was broken.

Mongers advertises their simplicity, but the more simple a dish, the more difficult it is to hide problems. On our final visit, their fish & grits ($24) was an unfortunate case study. The grits were excellent, creamy enough to provide a foundation but not hefty enough to distract from the more assertive flavors. The greens, at least, deserved that spotlight – they were classic, slow Southern with a dash of heat and vinegar. But the poached egg served on top only had a sad dribble of yolk, and the headliner was overcooked. The red snapper ($25) suffered that same fate as well. It was so rubbery it required a knife, but again the recipe held up. The gentle sweetness of green peas, combined with mildly licorice chervil, was a pastel idea of spring. Were it not for that pesky seafood, it would have been a highlight.

But improperly prepared seafood is a big problem in a seafood restaurant. It's an even bigger problem when that restaurant is owned by a fish supplier. And to be fair, the whole place was cast in a pall after suffering through one of the most unpleasant dishes I've had this year. The table knew we were in trouble seeing a broken mush puddled in the marinated mussels special ($12). The first few bites were aggressively briny and doltishly acidic, finally crescendoing in a mealy bite that made me gag at the table. With a quick look around the room, I spit it out and quickly turned over the uneaten shells.

It was the second dish served, and it took a moment to regain composure. The hamachi crudo ($15) following was fine, but suffered from the still lingering taste. Little things like unevenly diced pear were more noticeable after such a shock; I couldn't figure out why a place would allow the dish to make it to the floor. Even the moist, buttery pound cake ($9) brought out much later seemed flat. It was then that I figured out why the beautifully appointed dining room was almost empty at prime time on a Thursday. In a very competitive market, every night has to live up to a restaurant's potential.