A fond farewell to Suzanne Santos 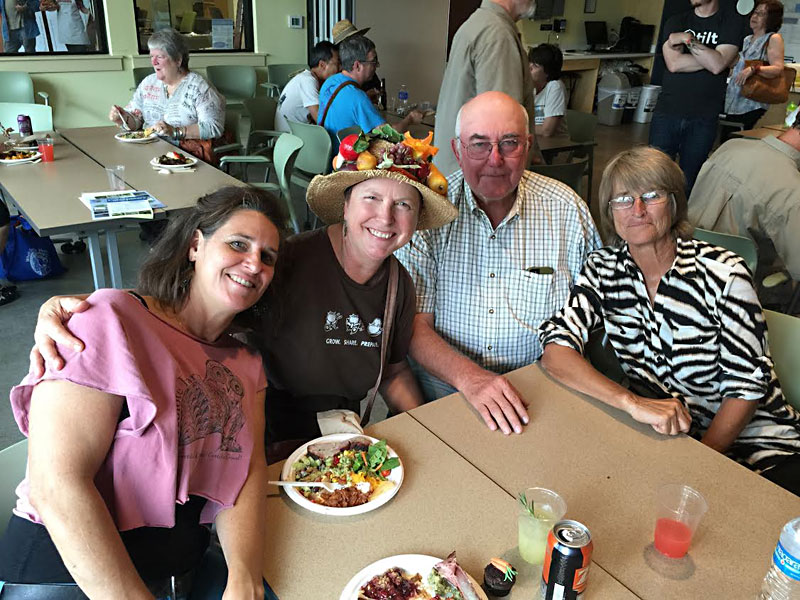 A Fond Farewell: On Saturday, May 30, more than 100 people gathered at the Sustainable Food Center offices (2921 E. 17th) to bid a fond farewell to longtime farmers' market director Suzanne Santos, who is moving to Oregon at the end of this month. It was very fitting that the tables were loaded with a bountiful display of the best fresh food and drinks Central Texas has to offer, because Santos has made the success of SFC's farmers' markets her life's work for the past 15 years. The crowd dined on smoked lamb ribs from I O Ranch, a huge pot of beef chili from Peach Creek Farm, a glorious selection of early summer vegetable dishes and salads from SFC market vendors too numerous to list, a cheese platter from Antonelli's Cheese Shop, cobbler made with Austin Orchard's blackberries, aguas frescas from Fête Accompli, teas from Nile Valley, canned beer from Hops & Grain, and Tipsy Texan cocktails made with fresh herbs and Tito's vodka. Santos' hard work and commitment to SFC's principles of operating manager-inspected, producer-only markets have helped make fresh, healthy food available to more Austinites than ever before, and the vendors demonstrated their appreciation with an amazing spread and plenty of hugs.

I spoke with Santos last week before the party, and a positive future for the SFC's farmers' markets is still very much on her mind. When the planned renovations to Republic Square Park are completed and the new Downtown library is finished, Santos envisions the Downtown market as "part of an important cultural apex for Austin." Indeed, in addition to the incredible increase in the ways people can now access fresh food, the prominence of farmers' markets in popular culture is one of the biggest changes Santos has observed during her tenure as a market developer and director.

When we asked farmers' market vendors about Santos, the most frequent response was something like, "If it hadn't been for Suzanne and these markets, we probably wouldn't have made it this long." Pioneering Downtown farmers' market vendor Katie Kraemer Pitre put it this way, saying, "When things are completely falling apart, Suzanne remains calm and unflappable. She's a solutions-based person who never lets ego get in her way; one of those people who has nothing to prove, she just quietly gets things done and is always a pleasure to work with." Carla Jenkins, who developed and manages farmers' markets at Lakeline Mall, Mueller, and the Domain, describes Santos as "my biggest and best supporter and cheerleader since I started working with markets in 2010. There was never any question about whether or not she would help me – she wants the very best for our local farmers. She's unselfishly shared so much knowledge and information, like taking me with her on farm inspections. She will really be missed." SFC deputy director Andrew Smiley will be stepping into Santos' position of market director when she leaves and he assured us, "We'll preserve her legacy of integrity in the SFC markets."