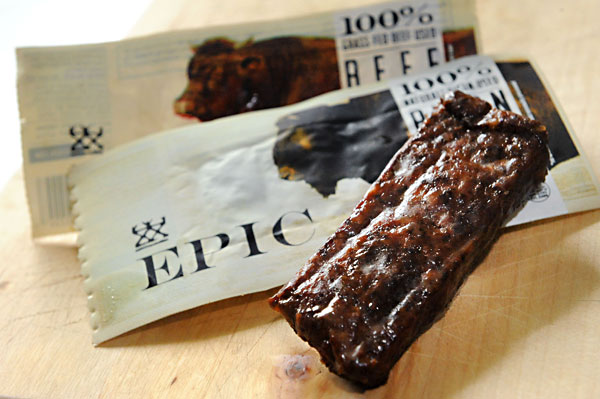 Just past a door that reads "Eat EPIC. Live EPIC," taxidermy boars and antelopes hang above the doorways and desks. It's a vibe reminiscent of grandpa's cabin in the woods, if that grandpa happened to read Apartment Therapy. With vintage leather furniture and lambskin throws, it's not the kind of office one would expect the former owners of vegan energy bar Thunderbird Energetica to set roots in.

Taylor Collins and Katie Forrest started that first company as believers in a plant-based diet, manufacturing a line of clean bars made from ancient grains and whole foods. At that time, Forrest was a strict vegetarian who regularly went on raw juice cleanses. Collins was an infrequent omnivore when they went into business, but became more strict in his dietary choices in support of Forrest. Thunderbird bars were created out of a need for quality fuel. Mountain biking, long-distance races, and Ironman triathlons required it.

They ate their product, they enjoyed their product, and they touted the health benefits of the carefully chosen ingredients. But behind the scenes, Forrest was suffering from gastrointestinal distress and daily stomach problems. They were certain that their diet couldn't be the cause, but they doubled down on eating only raw foods and juicing just to be sure. When the debilitating pain refused to dissipate, it was time to make a change.

On a camping trip in West Texas, they read Dr. Peter J. D'Adamo's Eat Right for Your Type, a book recommended by their holistic physician. D'Adamo's book stated their blood type thrived on meat. They were skeptical (indeed, there is scant scientific evidence to back blood type diets up), but more than willing to give it a try if it improved their health. It turned out that it did. One would think such a drastic switch from vegan to paleo would be extremely difficult, but Forrest shrugs that off. "We tend to do everything in extremes, so it wasn't that hard," she says, noting that her first triathlon was an Ironman.

In fact, that first bite was the easy part. The hardest part, the couple says, was selecting and preparing it. But, regardless of difficulty, they say it changed their health for the better. Inflammation disappeared, gastrointestinal issues dissipated, and training times improved. They thought if it could do that for them, perhaps it could do the same for other athletes. After all, their philosophy has always been to "feed others as you wish to be fed," and they made a product that met their own standards for nutrition.

They tried out the being-meat-powered-athletes idea on a 100-mile bike ride with only bacon as their fuel. The ride was a success, and EPIC was born. But they still had one problem. As faces of a vegan brand (they still allow their images to be associated with Thunderbird to this day), they couldn't exactly be meat evangelists. There were some small hints to the changed philosophy. They snuck in a throwaway line about bison jerky into Thunderbird's "about" page. Words like vegetarian and vegan were largely replaced by "plant-based." But Collins admits there was still some cognitive dissonance. "We were star-crossed lovers with Thunderbird and EPIC," he says. "We felt like huge hypocrites owning both a plant-based company and a meat-based company. More so, we would get insane emails from our hardcore Thunderbird fans who wanted to 'break up' with the brand because we had decided to make a meat bar. In the best interest of both companies we stayed away from making any direct links between them." It wasn't until the sale of Thunderbird was complete in late 2014 that the pair felt completely able to tell their story.

But while meat bars were a new product, the philosophy remained the same. Collins and Forrest weren't willing to give up their sustainable beliefs and lifestyle. They even upped the ante. "Agriculture is the most destructive industry in the history of the world," Collins says. A great deal of that destruction can be attributed to livestock. Collins and Forrest insist, however, that it doesn't have to be that way. Right out of the gate they knew they wanted to partner with ranchers who believed in the same ecological principles, so they researched, visited ranches, vetted possible sources, and ensured their suppliers were being good stewards of the land. "We partner with ranchers that we deem EPIC," Collins said. The pair also partnered with the Savory Institute, an organization that strives to restore the grasslands of the world, reduce the effects of climate change, improve soil, and create ecosystem diversity, all by putting livestock back on the land – not in a barn, not fed corn, not doomed to live out their days in a factory. "It's not just about doing less bad," Forrest explains. "It's about doing more good."

That means thinking beyond industry catchphrases like grass-fed and organic by exploring holistic land management practices and naturalistic approaches to raising livestock to ensure the animals are regenerated by the quality food they eat, and the land is regenerated by planned grazing. EPIC even attempts to use as much of the animal as possible. The company has offered a seasonal liver bar that, according to Collins, did surprisingly well. This fall or winter may see a special run of elk bars if a September tracking and hunting trip proves successful.

Such practices support a richly biodiverse ecosystem and a deceleration of climate change, creating a net positive return on the environment – giving cleaner air and nutrient-dense food for all, not just omnivores. "What still inspires me and gets me excited every day that I wake up," Collins says, "is the ranchers we get to work with and connecting with the land and the animals and trying to create our legacy on this Earth as beyond sustainable ... and continuing to push that message. We're really excited to help ranchers restore their land and their soil through livestock."

A big part of regeneration is nutrition, on which the folks at EPIC place no small amount of emphasis. EPIC bars are made from whole foods, 90-95% meat, fruit, and nuts. The livestock is grass-fed, organic, humanely raised, and antibiotic and hormone-free.

"We're trying to redefine what people perceive as nutrition and convenience and challenge people's perspective on that stuff," says Collins. "We're really shaking things up. There's definitely a shift in what people are looking for." Indeed, their bison bar is now the No. 6 bestselling bar in the nation. And EPIC bars have been the fastest-selling bar in the natural foods industry for the last two years. "It's been a really awesome journey," Collins says.

As former vegans, Forrest and Collins say that they know that the bar isn't for everyone. "We recognize that different diets work for different folks and don't ever want to come across as 'the paleo diet should be adopted by everyone,'" says Collins. "When we founded EPIC and went from vegan to carnivore, we didn't want to communicate that this was the ultimate epiphany that works for everyone." Their company ethos seeks to look beyond the often divisive rhetoric of dietary preference, and be beneficial in some way to everyone. As Forrest says, "We're all just people."