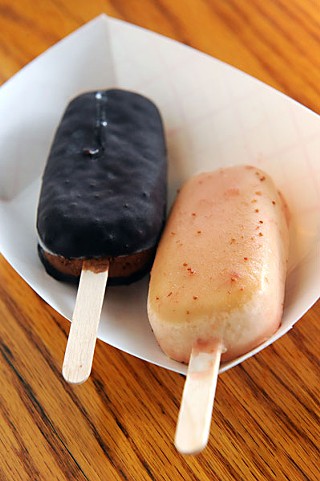 One of the first things you notice in this sunny little eatery is the framed photos of famous women named Mary – there's actress Mary Tyler Moore, Dallas makeup mogul Mary Kay Ash, folksinger Mary Travers, and several more – but the cafe isn't named for any of these women. Proprietor Ken Gambone saved that honor for his mother, the Mary who gave him life and then saved it 18 years later by donating a kidney. His heartfelt tribute to her appears on the company website. The small shop is pleasant and cheerful – the casual kind of place you might take Mom for coffee and a Belgian waffle, which evidently many folks did Mother's Day weekend after a local television crew ran a story on them. The segment revealed a secret already well known to the surrounding neighborhood of students, families, and medical professionals. Mary's has been open about seven months and already has a loyal following – regulars who insisted I give it a try.

After owning a catering business in his native Philadelphia for several years, entrepreneur Gambone chose to move to Austin last year for the warmer weather, the hospitality, and the thriving culinary scene. He leased a space on Red River that was once part of the well-loved Texas French Bread chain and did most of the finish-out on the cafe himself. The main room is dominated by the Mary photo collage, colorful menu boards, and a service counter with a small prep kitchen tucked in behind a wall. Guests place their order at the counter and, more likely than not, Gambone himself will assemble it while they wait. The simple menu is a mélange of waffles, breakfast sandwiches, coffee beverages, wraps, salads, and handmade gelato pops – mostly all items that can be made ahead and assembled at the counter with minimal cooking. Really getting into the spirit of his adopted city, Gambone is doing his best to support other local small businesses, making his breakfast sandwiches on whole-grain bread from Texas French Bread, serving the El Guapo and Ethiopian coffee blends from Third Coast, and sourcing tortillas for the wraps from a store in East Austin. 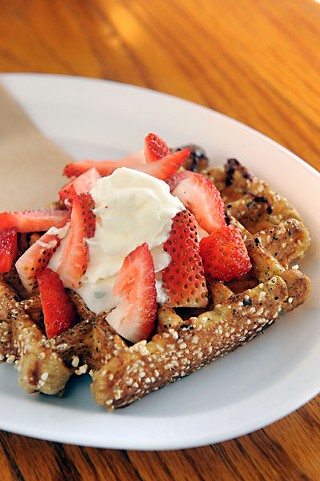 After a few visits to Mary's, my favorite item so far is the create-your-own breakfast sandwich option, where the diner chooses an egg style, a meat, a cheese, and some toppings served on warm toast. My personal choice is an egg over easy with bacon, Colby-Jack, tomato, and avocado ($7.99) – that and a good cafe mocha will start the day right no matter what time you order it, and the breakfast items are available all day. We've also tried several wraps and salads, the fillings and dressings for which Gambone says he makes fresh in-house. I found the Caesar the Day wrap ($7.99) with a Caesar dressing-coated chicken breast, Parmesan cheese, romaine, and tomato to be very appealing, but the strongly flavored black olives included in the tuna melt ($7.99) but not listed on the menu were an unpleasant surprise to my friend who ordered it. The Cubano wrap ($7.99) featured good-quality sliced ham, Swiss cheese, and crunchy pickles, but no roast pork; so, while it's tasty, it's not exactly traditional. All the wraps come with a little serving of chunky house salsa and thick corn tortilla chips that were unfortunately on the tough side. The Austin market certainly doesn't lack for vendors of quality tortilla chips – perhaps Gambone just hasn't met the right one yet.

When it comes to sweets, Gambone offers several flavors of handmade gelato in the form of pops ($2.99), and each flavor has been dipped in a coating – the pistachio is dipped in white chocolate, the peanut butter in a strawberry jam glaze, and the salted caramel is enrobed in dark chocolate. While I can't say that Gambone is giving Tèo, Dolce Neve, or Gelateria Gemelli a run for their money in the gelato game, the pops are a clever twist, and the three we tried were a pleasant treat, especially the rendition of peanut butter and jelly.

The Belgian waffles are Mary's most unique menu item. Gambone says they are particular to the city of Liège, made with a two-day, brioche-like yeast batter, and sprinkled with imported Swedish pearl sugar that caramelizes during the cooking process. The waffles are available plain or with a selection of mix-in items, toppings, or a scoop of gelato. The addition of pecans to the batter gave an added crunch to the caramelized sugar crystals on the waffle I chose, but even with Nutella sauce, it needed a little more moisture. The Elvis-inspired choice with peanut butter, sliced bananas, and bacon could have used crisper bacon and a gilding of local honey or maple syrup, but the waffles do have the potential to be a signature attraction here.