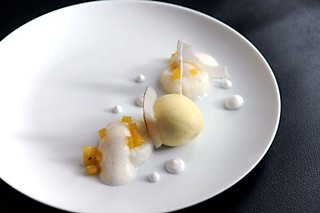 Let's get one thing out of the way. I'm no fan of Counter 3. Five. VII's overly festooned name. Reactions have ranged from mild confusion (Austin already has a Cover 3, a Counter Culture, and a Counter Cafe) to Eighties nostalgia (it reminded a couple folks of body-shaming mall stalwart 5-7-9). It's the kind of name Gene Shalit would lob back with glee, perhaps saying that "this Counter falls flat," or "3 Five VII adds up." (The restaurant itself is not immune to this instinct, encouraging patrons to "counter the norm." Nudge nudge.) 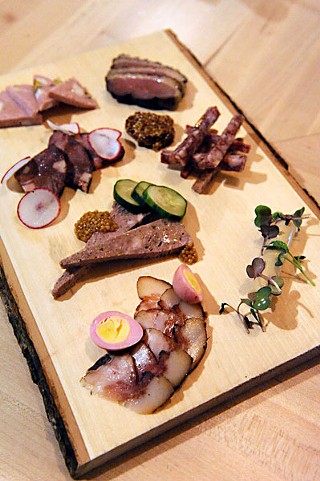 But clumsy though it is, the name does have some utility in explaining the concept, something that does bear some explaining. The Counter part is a bar/chef's table seating 26, where diners watch ice cream snuggle into quenelles, and petals gently land on a lettuce-wrapped prawn. There are no servers per se – just a crew of chefs (no line cooks), a maître d', a sommelier, and an assistant – but everyone handles the mechanics, replacing knives and refilling water. The numbers are the prix fixe course options available. Counter has distilled everything down to an equation, each element falling into place like a Sudoku.

If that seems a little cold, well, it is somewhat at first (which is not to knock any member of the very warm staff, led by founder Eric Earthman). The lighting, needed for the artistry on the plate, is a bit brighter than most restaurants, and the interior stridently removes any whiff of quaint. Chioco Design goes for the mathematics, too, with pieced chevron walls, a lowered grid ceiling, and metal screens that hail the mighty rhombus. It's not particularly the kind of place where you want to pop the question, but the soft leather barstools keep things from getting too squirmy. 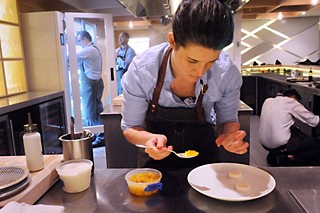 Once eyes adjust and the amuse-bouche comes out (an unpretentious take on a cheddar biscuit), the design does make for a sensual experience. There's very little distraction from your dining companions and the plate, and the room falls into an easy chatter. We opted for the five course ($115 with pairings) on the first visit, a quick jaunt that lasted about two hours, Uber to Uber. Counter's cooking isn't quite as stodgy as traditional multicourse dinners, but the food does provide a journey, a feat most of us can't accomplish by piecing a meal together à la carte.

The saline pop of roe in the rainbow trout prepared for the next course of burly beef tongue, only slightly blunted by a gentle honey sweetness (refreshingly plated on a black dish, the beet and chrysanthemum purée has the lushness of a 17th century still-life). The (human) tongue was then guided to octopus with some borrowed smokiness from lap cheong, before settling on duck with a resplendent crawfish relish and turnip wedges. Before we knew it, there was a sunny khao mahk (a Thai fermented-rice dessert) in front of us with a weightless cream soda foam. All the while, sommelier Jason Huerta was explaining his intellectual approach to the evening's pairings – matching the duck with a Riesling and the dessert with sake. It all went by in a sigh. 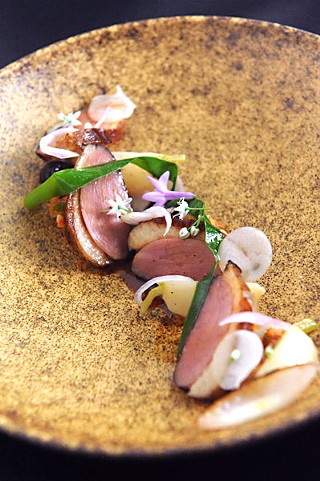 We were thankful the next visit slowed things down a bit.

A little early for our reservation, we started with bubbles and charcuterie in the entrance bar. Chef and partner Lawrence Kocurek's initial buzz in Austin food was largely on the strength of his charcuterie, first at the HOPE Farmers Market as the co-owner of Kocurek Family Artisanal Charcuterie, and later as the chef de cuisine at TRACE. It is still gobsmackingly good. At $25, it is also a nice entry point (no pun intended) to Counter. Fans of Kocurek's duck bacon will be glad to see it on the board, but – good though it is – it is overshadowed by the silky duck liver mousse. That's served with mustard, pickled quail eggs, and a salty lavash. The bar also offers a curated Antonelli's cheese plate for $18. 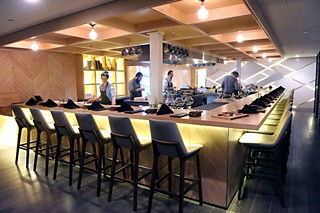 We were encouraged to take our time, which led to a much more relaxed seven courses ($95 without pairings), but we expect the more fully packed restaurant may have had something to do with that as well. The first salvo of chicken gelee refreshed with an unexpected celery. Kocurek's charcuterie skills (and the pickled quail eggs) re-emerged with a pâté de campagne using foie gras instead of pork. Then came some virtuosic work. The trumpet mushroom sang of lime, the slow-cooked egg forgetting to be a culinary cliche. The intriguing wild boar has a cardamom gastrique and a carrot purée, but bitter carrot ash removed any treacle. The striped bass was superlative. The fish isn't the most compelling thing in the sea, but it was perfectly flaky. And it acted as a base for an inventive use of sunchoke – in chips and with artichoke in a purée (we will be on the watch for Counter-branded baby food). The sunchoke formed a base for verdant English peas and an olive gremolata. It astounded.

The only misfires at either visit were slight. The prawn, with charred-tomato vinaigrette and green curry, could have teased out a bit more depth, and the frozen maple yogurt dessert suffered from the ubiquity of cold desserts featuring beets (although the hibiscus mochi was an inspired touch). And the first visit's breakneck pacing might have been helped with another service professional on the floor. But really, that's a matter of personal palate and a preference for lingering.

What's more important is that Earthman, Kocurek, and crew know that fine dining is about making people feel special. On the second visit, pastry chef Sarah Prieto sent out tiny, confettied macarons to everyone because one of the diners had a birthday, in addition to the extraordinary muffin she sent home for breakfast. I still don't like the name, but I won't be soon forgetting it.

A version of this article appeared in print on May 8, 2015 with the headline: The New Math