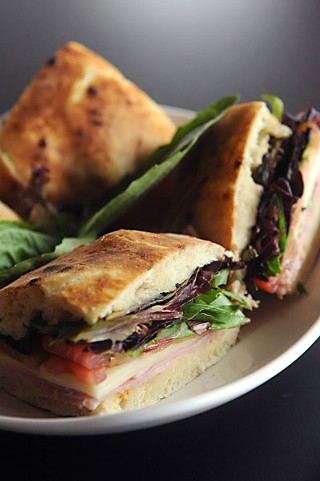 Another day, another established trailer making the transition to brick-and-mortar. In an Austin food scene experiencing the fuzzy afterglow of its cultural capital, narrative is everything. It makes the difference between deafeningly loud and echo-y dining rooms; it defines what diners regard as their tried-and-true. We like to see our chefs on the Food Network or making (perhaps dubious) claims about a culinary upbringing. It lets us tell a story to ourselves. We're hip, we're knowledgeable. Relevant. 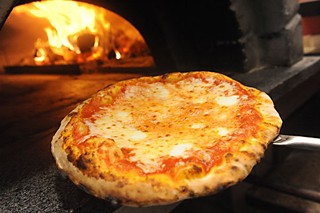 We were somewhat curious as to why Lucky's Puccias and Pizzeria wasn't packed on either of our visits, while other trucks who made a similarly timed jump (the Peached Tortilla, Kebabalicious, Chi'Lantro) seem to almost always have lines. The truck had (and still has) a narrative that should lure customers like a cartoon pie cooling on a windowsill. Luciano Sibilla made his name some time ago with his puccia sandwiches, specifically the cultish bread, racking up a flurry of national articles and TV appearances in the process. That bread has the added benefit of being micro-authentic. It was almost his own personal carb.

Not much has changed there. The bread, fired to order, is still buzzworthy. For those unfamiliar, it's similar to pizza dough – neutral enough to support almost any filling. And like a police chief in a prime time procedural, the charred crust gives way to a cuddly interior. It's easy to binge.

The truck's menu also hasn't changed, at least in the sandwich section, bringing back classics like the Lucky's (prosciutto, mozzarella, and Lucky's ubiquitous chipotle aioli), the Vegetariana (showcasing artichoke pesto), and the Classica (ham and fontina). True, the dining room doesn't have that retro futurist thing that is manna to Austin diners. One wall is a lazy Tuscan red, and the room is scattered with drum shades and a few nondescript photos. But folks still flock to the truck at the Tiniest Bar in Texas, happily eating in what's essentially a backyard. Maybe the locations are too close together, maybe the Austin diner is distracted from the small bites and the fusion and the hip-hip-hooray, but the elevated yet understandable food should be enough to have the storefront hopping.

We tried a few puccias we had not gotten around to at the trailer. The Nutella ($6 full size) was everything one would expect, a fat-bomb crowd-pleaser that could only be improved by a few slices of banana. The porketta's (the mini version at $4.75) shredded red cabbage wound up everywhere but our stomachs, but the pork loin was splendid by itself. Unfortunately, the chipotle cloud didn't allow a ray of fontina's nuttiness through. That aioli was better used in the mini hot pastrami ($4.75), a maximalist blend of four cheeses, tangy peppers, sharp red onion, and smoky pastrami. There's no subtlety of flavor, and the heat isn't for everyone, but it gives roller-coaster thrills.

Nuance isn't really Lucky's gig anyway. The anything-goes approach extends to the Neapolitan-ish pizza. We wonder if the Americana pizza ($14.75) is a reflection of Puglia, Italy-native Sibilla's view on his new countrymen. It's a dubstep drop of a pizza, adding a thick layer of mozzarella, pancetta, french fries, and a fried egg to the tomato base. It still all works somehow. The Diavola ($13) takes a less chaotic approach as a proxy for pepperoni. It's a little greasy, but a blot is all it needs. Pizza is not for prima donnas.

We weren't wild about the new pizza ($5 as a mini), a Margherita divorced to resemble the Italian flag. The components were fine, and the pesto stripe could have worked on its own, but we hoped for an ingredient reconciliation. It's not yet on the menu though, so perhaps some tweaking is still to come. The crudo e arugula ($14.74) is just the right pie for spring. The arugula lent pepper to the mild but richly marbled prosciutto, the rare example of luxury that still feels light.

The biggest surprise was the desserts. Although we are a fan, we decided to opt out of the Dolce Neve gelato (OK fine, it was sold out). We chose instead a pair of house-made options. We weren't prepared to be impressed when the ready-made sweets came out of a cooler. And we were a bit perplexed when there was then a slight wait from counter to table. But the $6 moulleux au chocolate (a molten lava cake when it's feeling a bit more populist) came out with toasted almonds and a piped plume of whipped cream to one side of the rectangular plate and a beautiful striated snail of sauce in the other. We simply did not expect such plating and composition at a fast casual place (the taste – though nothing new – was on point, too). The salted caramel pot de crème ($6) wasn't quite as showy, but the brûléed flavor carried no twinge of regret.

If Austin diners still need more visibility and chatter, maybe it's time for a break from the near-constant riot of new. And when we are all a little more grounded, we suggest you eat a damn sandwich.

A version of this article appeared in print on May 1, 2015 with the headline: Fortune-Telling