Drinking up the Austin Food and Wine Festival 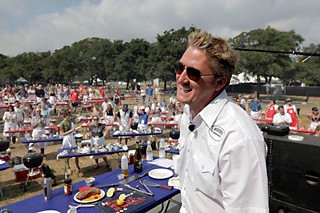 "I've watched AFWF evolve from just an idea and tequila shots in Charlie Jones' office to one of the most interesting food and wine festivals in the country," says Herman, recalling his initial brainstorming sessions with Jones, one of the founders of C3, Aus­tin's premier event production company.

"Austin Food and Wine has really assumed its own identity within the festival landscape over the past four years," Love agrees. "It's become a true Texas event. From the whole fire pit area in itself to having festivalgoers taste meat right off the spit, you really get the authentic feel of this state. It's a spectacle, yet interactive and approachable at the same time."

The same thing can be said about Love's highly anticipated hands-on grilling demos, an annual tradition at the festival. Participants are gifted a cooler full of the essentials: meat, veggies, and an ice-cold bottle of white wine. An animated Love teaches the audiences step-by-step grilling tips (spoiler alert: regular wine swigs are, in fact, an important part of grilling), then they wrap with a little game called "Shot Roulette" (we won't spoil that one).

This year's festival will bring culinary powerhouses like Andrew Zimmern, Richard Blais, Graham Elliot, and Jonathan Waxman back to town, and plenty of other highly acclaimed traveling chefs are participating in AFWF for the first time, such as Atlanta's Hugh Acheson, Jenn Louis from Portland, Ore., and Boston's Ken Oringer and Jamie Bissonnette.

Our expansive state is being proportionately represented by a wealth of culinary talent new to this year's festival. San Antonio's Steve McHugh will be serving at the daytime Chef Showcase, while Heng Chen and Cori Xiong, co-owners of Houston's Mala Sichuan Bistro, will be presenting at Friday night's Taste of Texas Kick-Off Event alongside Richard Blank­en­ship, executive chef of CBD Provisions in Dallas, and Quealy Watson, executive chef and partner of the award-winning Hot Joy in San Antonio.

Watson looks forward to connecting with colleagues like Andrew Wiseheart and Justin Yu at the fest. "Those are great guys with great restaurants," he says. "And honestly, it's fun to bring some of our cooks up and get a break from the grind of regular service." He will be sampling out a new creation at Taste of Texas – fermented goat laap tostadas with coconut sour cream, stink bean, and herbs. "Hopefully, we can broadcast that there's interesting, original, and delicious food being made in San Antonio," he says.

Blankenship echoes his sentiments and hopes to act as an ambassador for Dallas' food scene. "I think that the concept of CBD Provisions is something that would fit in seamlessly with the Austin restaurant scene," he says. "We're an accessible and affordable but modern restaurant, serving up creative Texan comfort dishes. I think a lot of people in Austin have a preconceived notion of Dallas restaurants, and I hope I can break up the stereotype."

Blankenship plans on serving a fresh farmhouse cheese from Veldhuizen Cheese in Dublin, Texas, topped with roasted, raw, and fermented spring vegetables. "I wanted to keep our dish very spring-focused and simple, embodying the restaurant," he explains. "Also, it's kind of unexpected to serve no meat whatsoever in the Taste of Texas event. I like that!"

Though the Peached Tortilla's truck has been featured outside the Grand Tasting Pav­il­ion for the past three years, chef/owner Eric Silverstein is honored to be passing out bites in a Chef Showcase this year, after his first brick-and-mortar opened this past winter. "There aren't many chefs that started in food trucks who get invited to participate on this big stage," he says. "It's like we're checking into the main hotel now!" He'll be serving a new item influenced by the bold Japanese, Malay, and Korean flavors found throughout the menu at the Peached Tor­tilla. "We're not going to put out anything traditional, but the Asian flavors will certainly be there."

Food-loving festers will also get a few sneak peeks of what's to come in Austin's immediate future. Love plans on opening Lonesome Dove Austin early this summer, an accomplishment he's been awaiting since becoming the official chef of Austin City Limits Music Festival in 2009. "Guests will definitely get a sneak peek into what we're planning for the restaurant, but I can't give away too much!" he says.

Chefs Ji Peng Chen and Ling Qi Wu will be presenting dishes from the highly anticipated Wu Chow, which partners C.K. Chin and Stuart Thomajan (Swift's Attic) plan to open this summer. "We are really trying to bring fresh, authentic Chinese food with Austin farm-to-table sensibilities to the restaurant," describes Thomajan. Chin looks forward to face time with his future guests. "That is the best part of our job – getting to see how people react to the food," he says, adding, "It's always exciting to showcase Austin on the national stage and show them what we are doing down here."

Austin's definitely doing something right, because for the first time, the AFWF has completely sold out. Founding partner Her­man can't help sounding a bit like a proud dad. "As Austin has evolved into one of the premier food cities in the U.S.," he says, "the festival, in just four short years, has become one of the premier food events."