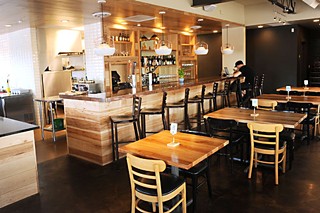 With the current money-drenched palooza happening in Austin hospitality, it's easy to forget that our culinary backyard wasn't always sod with locally sourced microgreens. When Teresa Wilson opened Aquarelle in 2000, Chronicle contributor Rachel Feit was impressed by the details – the amuse-bouche, the precise cut of vegetables, and the new cutlery presented with every course – details now so common as to be unnoticeable. Wilson's tiny house helped get us there when Austin food was dismissed with the sneer of "regional."

But that was then. Even in the few years since the French classic shuttered, Austin's food scene has irrevocably changed. It's more difficult to make a splash, and name chefs break bottles on ships almost monthly. Wilson has retooled too, rolling out a neighborhood concept – Sala & Betty – that hopes to reflect the way Austin now eats. Sala is a magpie of contemporary dining. Breakfast and lunch is counter service before switching over to full service at dinner. There's also a separate to-go menu.

We can see why Wilson would want to hedge her bets. It's difficult to know what the neighborhood will adopt. (Nearby restaurants run the gamut from constantly packed to disconcertingly barren.) But it makes Sala & Betty a little difficult to peg. There's a focus on seasonal and local ingredients, but any restaurateur worth her salt well knows to sprinkle that high and often. It's vaguely New American, itself a vague term for an undefinable sort of cooking, but it doesn't have the trendiness of like minds in the category. Oh, and there's also a drive-through.

The Sala building last housed the Stallion Grill (and briefly a Big Kahuna Burger), a restaurant not exactly known for its elegance. But using the original structure's bones, Sala now bicycles around Provence with a bolillo instead of a baguette. The richly grained woods and a liberal use of white bring in a little Hill Country, reinforced by the barn beams of the patio. There are some nice farmhouse touches, like heavy provincial blue chairs and mismatched plates, but they are not played for schtick. It's as light as Wilson's former spot could sometimes be stuffy, a testament to Austin's evolving definition of "upscale." Aquarelle's trademark floral china reappears on Sala's tables, but here it is a charming flourish – not a squiggle within an arabesque.

The food has largely lightened too (although Aquarelle's cooking was always more gastrique than béchamel). Gone are the confits and foie gras, replaced by a vegetable-forward (although none of the dishes are marked as vegetarian) menu that avoids the trap of planning by trend piece. Of our visits, the proper dinner experience was by far the most pleasurable (aided by adept service). The garbanzo pancakes ($8), flecked with green onion, were downy. The butternut squash and the maple syrup helped the dish do the same seesaw as chicken and waffles. The gnocchi ($9) seesawed, as well, pitting gently verdant celery root against punchier eggplant. Those averse to Dijon might want to skip the mustard-green gratin ($8). The white bean purée does its best to temper, but it's still one aria short of being Leontyne Price. The mushroom "meat" balls ($12) were the slightest bit dry, but we would drizzle the herb oil and mushroom crème on a shingle. We expected a bit more from the puffed barley ($2) snack than puffed barley, but we can't blame Sala for that.

The ready-to-go menu isn't that far from the offerings at Boston Market – a selection of family meals and a few sandwiches, salads, and desserts. We ordered two of the family meals ($34 for 1 pound of meat and two large sides). The pork shoulder was perfectly cooked, juicy without the slick of fat. The rotisserie chicken was nicely roasted too, although we would have liked a little crisp in the skin. Those were accompanied by green beans tossed in garlic, thickly cut fries, tomato stewed potatoes, and a grilled and herbed squash medley. The beans and squash were textbook, if needing acid and salt, and the fries' limpness didn't detract from the taste, but the potato dish was odd. The combination of spuds and tomatoes is classic, but here the tomato seemed to be used more as a food dye than a flavor profile. It yearned for more indulgence. The bake-at-home chocolate soufflé ($8) had plenty of that, but the diminutive quarter-pint dessert was not really worth the trouble against the ready-to-eat (and less expensive) brûlée of the day ($4).

Lunch options were mixed. The Mister T sandwich ($10) was electrified with a bleu cheese sauce. The chicken and dumplings ($10 for a bowl) was almost like sipping a bowl of ghee, the richness flattening the dish. We were confused by the arugula salad ($8). Sourdough croutons made the bulk of the dish, veined by the odd leaf or bit of ham. Were they to add a few diced tomatoes and give the bread a more thorough soak in the (delicious) honey Dijon mustard, we would have been happy to enjoy a "panzanella." But we expected the top billing to actually be the star.

But these are all things that can be tightened. By and large, the stumbles were the result of trying to do too much. We hope Austin's culinary bubble doesn't break before Sala can become a sleeper. After all, there's another culinary era that still needs defining.