Perhaps best without the "grille" part

Every so often a film finds an audience despite itself. We celebrate the stilted performances, the period details, the stray boom mic in the shot. And we give that pleasure a word and an aesthetic, "camp," perhaps to keep our distance. If we were to plot out our own sci-fi epic, it would certainly be better than the mess before us. There's false comfort in every frame. 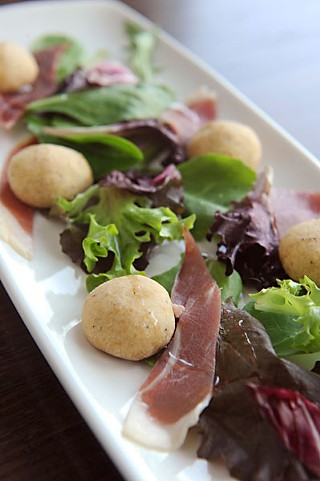 But the truth is that Troll 2 or The Room or Coven are exactly the kinds of movies most of us would make were most of us graced with the right balance of delusion and passion to try in the first place. And 416 Bar & Grille is the kind of restaurant that most of us would open. Only a few things about the restaurant could be called successful, but I've still discussed 416 more than any of the current slate of dining hot spots. The restaurateurs haven't quite achieved the dining tabula rasa they were going for, but they somehow have landed near charm. For lack of a better word, they serve culinary camp. 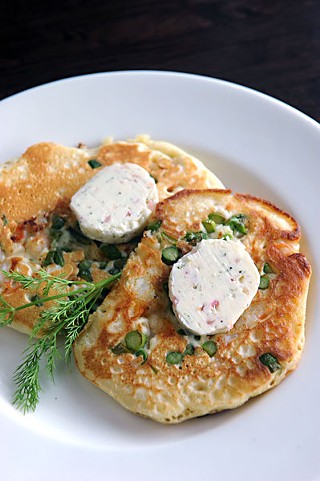 Take, for example, 416's deconstructed nachos ($6). Deconstruction has for at least a decade wound up on lists of regrettable dining trends, but somehow never completely lost its appeal to a generation of chefs looking for a novel way to write paragraphs with a relatively limited vocabulary. At its best, the technique smartly evokes sense and memory, but it is more often merely a collection of components – the kind of thing a toddler would create if he insisted his vegetables could not touch on the plate. 416's falls in the latter camp – separating the stoner classic into a bowl of fried tortilla wedges and a separate plate housing four tiny stainless ramekins of sour cream, queso, pico, and salsa. Were Susan Sontag a food critic, she would eat it up.

That naive pretense runs throughout the menu. The braised pork sandwich ($9) is served with "avocado mash." The oozing cheese steak ($12) is "griddled," not grilled, and at least one salad is stacked. It reads like the food diary of a home cook brainwashed by episodes of Chopped. But neither member of the father/son ownership team is new to the business. According to the website bio, John Jurey pioneered San Francisco food truck culture before settling on a brick-and-mortar in St. Augustine, Fla. Son Colin most recently worked at 24 Diner, which seems to at least partially inspire 416's "Americana Cuisine."

But diverse as 24's menu may be, it makes sense. 416 almost mocks expectations. Like the ELM Group mainstay, 416 serves breakfast anytime. On weekdays, "anytime" means any time other than breakfast, as the restaurant does not open until 4pm. 24's atmosphere gussies up the greasy spoon with booths and midcentury details. 416 throws you into the past too, but it's more like the apartment of the Memorex "blown away guy" – all gloss (you can still smell the paint) and gunmetal. Even the placemats are devoted to cold gray, a palette that does the food no favors. And 24's prices top out at a $23.95 rib eye. 416 has one too, but it goes for $30 (pardon, 30. – another affectation).

More importantly, many of 416's dishes seem just off. The flaky vodka crust on the chicken pot pie ($18) was well executed, but the thinnish filling would perhaps be better appreciated by a Hungrier Man. There wasn't a bit of crisp in the fried chicken ($15), a dish sorely needing seasoning. And the Parmesan drops ($10), enticingly described on the menu as having prosciutto and white truffle glacé, were vaguely cheesy shortbread cookies served on a rectangle of supermarket field greens interspersed with irregular ribbons of the meat. There was no trace of a glacé, and certainly no white truffle.

And yet, still there was considerable charm. The service staff were attentive and easygoing; there was a pride in the food that never quite matched up with the product. What did match up was the drink program, boasting innovative and balanced cocktails like the Holy Mole ($9 – with rum, creme de banana, and mole bitters), the 512 Matador ($9 – mezcal, jalapeño, and tamarind), and a basil gin rickey ($9). Best was the Pear of Dice ($10), a knockout combo of allspice, whiskey, pear, and maple. Both proved that a lot of care went into 416 Bar & Grille. Like the best camp, theirs is accidental. Unfortunately, there is no midnight movie circuit for restaurants. To survive in the increasingly cluttered Burnet Road dining corridor, they will need a new script altogether.