Hopping on the rabbit bandwagon 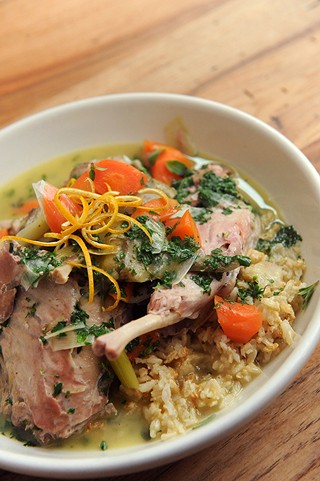 A rabbit special at Dai Due (Photo by John Anderson)

Rabbits aren't just for snuggling. They are, in fact, for eating. Though rabbit meat's last heyday (at least in the United States) was during World War II when most of the beef was shipped to troops overseas, the consumption of rabbit meat is again on the rise. While some might find the notion of eating something so cute quite difficult to stomach (Whole Foods' decision to start selling the white meat at select stores in 2014 was met with boycotts and protested by groups such as the House Rabbit Society), the meat has historically been embraced by different cultures and countries throughout the world, as it's accessible, sustainable, and delicious. In Austin, chefs, diners, and home cooks are increasingly clamoring for the mild and sweet taste of the versatile meat.

According to Dai Due chef/owner Jesse Griffiths, the restaurant is going through 20-30 rabbits a week, a particularly high volume. Because Dai Due generally serves it as a whole half-rabbit, that represents close to 40-60 servings. "I'm a huge fan of rabbit, because I like the animal, and it's very low impact. It's a very efficient protein, and I think if you legitimize it and normalize it through your menus then you're going to start to see people raise them more, and I think that's part of breaking down our food system to make more sense," says Griffiths.

Dai Due experiments with a variety of rabbit dishes including rabbit tacos, stew, confit rabbit, green curry with fresh herbs and rabbit, as well as a traditional French-style preparation using muscat, fennel, and cream. According to Griffiths, the resurgence in rabbit is likely a result of more adventurous eaters. "People in the context of this restaurant come in and eat things like rabbit livers as an entrée and we sell out of blood sausage and chicken feet. These things aren't ordered for irony anymore. ... They're ordered because that's what people want to eat for dinner," he says. "If you're going to eat meat, you should eat meat."

While Dai Due doesn't procure their rabbit from HausBar Farms (it is not currently allowed under the urban farm ordinance), Griffiths says the urban farm's practices are the best he's ever seen in terms of raising animals, and in this case, rabbits. Dorsey Barger of HausBar Farms started raising rabbits because her license from the Depart­ment of State Health Services to raise and slaughter chickens included a rabbit exemption. "That's when I discovered how amazing, sustainable, and wonderful they are, and I fell in love," she says.

Ideally suited to an urban area, rabbits do not take up much space, don't smell, and they're quiet. The fact that they breed prolifically makes them a particularly sustainable source of urban protein. According to Barger, she and her wife Susan Hausmann raise their own protein because they are horrified with the way protein is raised in terms of cruelty to animals in this country and around the world. "We decided to divorce ourselves from the system. We want the animals to have a life and enjoy living, so we created an entire system that would allow all the animals to feel safe and secure and have lots of room to run around and play," she says.

Barger's method includes approximately 1500 square feet of living space for the rabbits, reinforced with chicken wire so the rabbits can't dig out, and fishing line strung zig-zag across the top of the open running space. Privacy during birthing is important to rabbits, so Barger created a system of "birthing centers" where the mothers can go to give birth and wean for four weeks until the offspring are off to "teenage housing" for another four weeks. When they're big enough, the rabbits are let loose in the bunny corral. Once the rabbits are full-size, HausBar processes the animals for their consumption utilizing every part of the rabbit. "We eat everything, including the lungs, brain, and the eyeballs. We eat every part except for their intestines. That's super sustainable because nothing is wasted. It's so unbelievably delicious."

Barger and Griffiths aren't the only ones intrigued by the meat. According to Swift's Attic sous chef Zack Northcutt, the restaurant has already served rabbit five times in the first three months of the year, selling out each time. According to Northcutt, if the restaurant had more access to the meat in terms of a good, local source, it would be probably be on the menu more. Northcutt prefers to confit or braise the meat, adding that it pairs nicely with citrus and is great for pasta and cream sauce, as well as tomato sauce. Sometimes Northcutt makes bacon from the belly. "It's really versatile in terms of what you can do with it, and it's such a light and refreshing protein. Plus, they're adorable and delicious," he says.

Sam Hellman-Mass, executive chef and part owner of Odd Duck, also prefers to make a confit by cooking the rabbit in chicken fat. In the past he's also prepared a rabbit terrine using sausage, cream, eggs, and ground rabbit meat. According to Hellman-Mass, eating rabbit can challenge expectations of what food is. "Rabbit looks like something you're more familiar with than other animals, and the association can be difficult to get around. The appearance of a dead animal for someone who's not used to seeing that is more striking than a cellophane-wrapped something you'd see in a grocery store, but if you can get past that, one is clearly a lot better than the other."

Season rabbit with spice mix and sear both sides in a roasting pan on low heat until golden brown. Cover the rabbits with stock while in the pan, then cover the pan. Put the pan in the oven at 325°, and braise for at least six hours until completely tender. Let chill to room temperature in the braising liquid. Pull rabbit from the roasting tray, and strain the stock. Separate meat from the bone, placing the rabbit meat into a mixing bowl. Whip the meat in a food processor with a paddle at medium speed. Add back around a cup of the braising liquid into the mixer to help process the meat. Slowly incorporate half of the melted butter into the bowl until the mixture is smooth. Transfer the mixture into small ramekins or another type of jar, and pack well. Pour a bit of the melted butter over the top of the mixture and let chill for at least an hour before serving.

Lola Bazan Galindo has worked for HausBar for the last six and a half years. She knows how to slaughter and butcher any type of animal and how to use every bit of edible material from any of those animals: lungs, gizzards, eyeballs, brains, kidneys, livers, intestines, stomachs, feet, and blood. Passed down through Lola's family's oral tradition, this is the first time the recipe has been written down.

Place the rabbit in a large stock pot and fill with enough cold water to cover the rabbit. Add salt, one half of the onion, and five cloves of garlic. (No need to chop the onion or garlic.) Bring to a boil, reduce heat to medium, and cook at a simmer for an hour and a half to two hours until the meat is falling off the bone. Drain the liquid and remove the onion and garlic (you can throw them into the compost at this point) and pick all of the meat off of the bones, shredding into bite-sized pieces. Set aside.

In a large sauté pan, toast guajillo chiles over low heat, stirring continuously so that the chiles won't burn, for about two minutes, until they become wonderfully fragrant. Remove from pan and set aside in a heat-proof bowl large enough to hold all of the peppers.

Into the large sauté pan over low heat, add four cloves of garlic and sauté stirring continuously for five minutes so that the garlic browns and becomes fragrant but does not burn. Remove and place in a blender.

Pour boiling water over guajillos to soften them. Let stand for two minutes. Remove chiles from soaking liquid and place in the blender. Reserve liquid.

Into the large sauté pan, add peppercorns, cloves, and comino seeds and stir constantly for five minutes so that spices become fragrant and toasted but not burned. Place toasted spices in the blender and add just enough of the chile soaking water to almost cover the contents of the blender. Purée all ingredients.

Add two tablespoons of oil to the large sauté pan and heat over medium-low heat. Pour puréed mixture through a sieve or strainer into the sauté pan pressing the solids with a wooden spoon to get all of the liquid out (be careful of oil splatters which are pretty much inevitable) and to remove whatever solids weren't puréed by the blender. Discard solids and stir puréed mixture into oil. Stir shredded rabbit meat to mixture and salt to taste. Remove when meat is heated through. Serve on fresh homemade corn tortillas sprinkled with the cilantro and the remaining half onion, finely chopped. Fantastic Fest 2017 Preview
The show must go on