Flashes of brilliance at Fixe 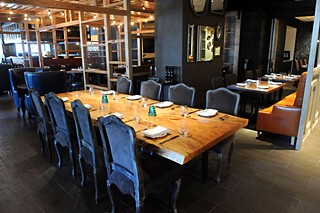 Take a flashlight, just in case. One of the slender, pinpoint types or a flat one shaped like a credit card should do the trick, because depending on where you're seated at Fixe, you could very well need the extra light to read the menu and appreciate the refined presentation lavished on the food. I understand there's a fine line between lighting efficiency and creating a rustic ambience, but to me, needing a flashlight is an example of how the owners here sometimes slip off the tightrope. The lighting issue is emblematic of my personal conflicts where Fixe is concerned. Downtown Austin's hottest new Southern fine-dining venue gets so many things right that the occasional misstep seems even more glaring as a result. 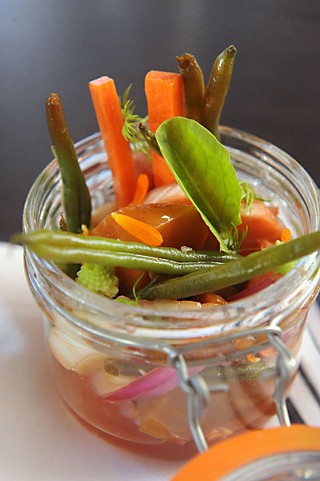 First, the good news: In both design and decor, Fixe evokes an atmosphere of rustic, masculine comfort with reclaimed woods, comfortable chairs, antique sideboards, and framed mirrors that all evidence Southern landed gentry, generations of substance with no need for pretense. The kind of folks who would welcome you to the screened-in porch of their fishing camp or the dining room of their country estate with equal aplomb. Service is another area in which this new place definitely excels. On both of our visits, servers were knowledgeable about the food, accommodating with flashlight assistance when necessary, and skilled at providing informed attention without cloying familiarity or bothersome hovering. Keith House's staff members are obviously well-trained hospitality professionals, the kind of individuals to take note of and ask for specifically on return visits. 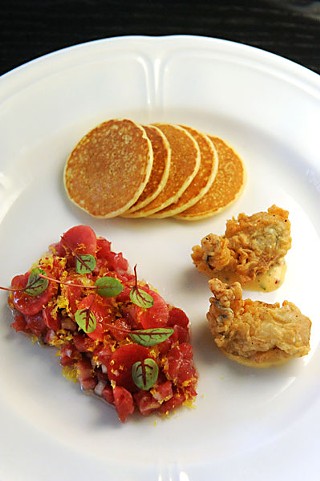 So, now we come to the food, and there is actually plenty of good news here, as well. Southern food is certainly having a moment locally, with two fine-dining venues opening in 2014 in the central city alone. Executive chef James Robert and chef de cuisine Zach Hunter have years of fine-dining experience between them, and their skills are in evidence in the exquisite presentation of the food. However, I do have some issues with errant menu descriptions, unbalanced flavors, and some molecular gastronomy flourishes that left me asking why rather than wanting more. I was left with the suspicion that the pristine copy of Edna Lewis' In Pursuit of Flavor displayed on the shelf in front of the open kitchen was just a prop and there's a food-stained copy of Modernist Cuisine behind the line. Be sure to start your dinner with the biscuits ($6 for 3) that are baked to order and arrive at the table piping hot and impossibly fragrant. Be advised, however, that the preserves listed on the menu aren't preserves at all, but a sour, unspreadable berry compote that diminishes rather than enhances these buttery, golden examples of Southern baking artistry. The same goes for the blob of spicy n'duja that seems to have wandered in from a pizza joint. Better all around to request the honey and butter suggested by our server, Lindsay.

Moving on, there are snacks, appetizers, and small plates, plus three preparations of grits before you get to the entrées. It's possible to make a meal out of several small plates, but the portions are dainty and some of the descriptions misleading, so ask questions. The deviled eggs ($6) are marvels of stature, garnished with glistening trout roe. They were perfect one time and overwhelmed by too much Dijon mustard the next. Both the sweet tea pickles ($4) and the pickled shrimp ($14) could have used a bright pop of acid to balance the sweetness of the pickling brine, and the icy-cold Ahi tuna muffuletta ($15) bore no resemblance in taste or format to NOLA's signature sandwich, save for some sesame seeds in the crisp, taco-like shells. This is a good dish in serious need of a new name. The delicate cornmeal pancakes with the beef tartare ($17) are ethereal miniatures, but the two most remarkable items on this section of the menu are the crispy beef tendon ($4), savory cotton candy puffs that disappear on the tongue, and the seemingly simple but revelatory grains ($8), a layered bowl of cremini mushroom gelée, uni emulsion, and a topping of toasted seeds and puffed grains.

The Pescavore ($15) offers five perfectly cooked Gulf shrimp nestled on a bed of luxurious, buttery grits, and the lobster and crawfish pot pie ($22) elevates comfort food to new heights of elegance. The duck fat hushpuppy that comes with the duck breast and black-eyed pea cassoulet ($23) would do any fish camp cook proud, while the blackened red snapper ($24) featured more restrained spicing than the Paul Prudhomme original. The kitchen here turns out a very good fried chicken ($18) with crisp, mahogany skin drizzled with spicy honey, but the two small pieces for the price struck me as stingy. The desserts are all intricate wonders of scientific techniques and deconstructed presentations, and I'm generally not the customer for such things. A prime example is the Meyer lemon cake ($7), a chunk of cake batter that's been aerated and frozen, sitting in a pool of huckleberry compote with a quenelle of poppy seed ice cream. Tasty and technically impressive, yes. But the final reaction at our table was much more "How did they do that?" rather than "Wow, I want some more." There are definitely flashes of brilliance at Fixe, even if it's necessary to pack a flashlight and navigate around some modernist cuisine in order to find them.