Any good performer knows you have to play to the crowd. Ham it up and you risk alienating your audience; play it straight and you could put them to sleep. The balance is easy to strike in the hipper parts of town, where Instagram can have as much say in menu planning as individual palate. It's not so easy on West Anderson – a booming area but a booming area with parking.

There, Fork & Vine caters to a clientele that is perhaps not so taken with gimmicky presen- tations or the latest "it" ingredient. They're a little bit older, certainly well heeled, and not particularly trendy (the neighbors include a silk plant shop, a Calico Corners, and a Bernina sewing center). To get a curtain call in this neighborhood, a restaurant has to do a little more than screw in a few Edison bulbs and open their doors. Fork has the bulbs, but they are obviously working hard to cultivate regulars.

The atmosphere is suitably grownup. Claret walls and creeping metal sculptures nod to the "Vine" part of the name. That's mixed with a muddy blend of sage, terra cotta, and wooden brown, bleached to crisp white toward the patio. The servers wear menswear stripes, like the chorus line of Newsies. It's all upscale in the way international hotels are upscale, quickly translating a sense of occasion.

Fittingly, there's country club chumminess in much of chef Camden Stuerzenberger's cuisine. For dinner, the chicken ($19), stuffed with green chorizo and propped like Washington Crossing the Delaware in a pool of mole rojo, has the easy familiarity of Southwestern cuisine. The crisp microcubed apple salsa throws a lifejacket into the deep, making it more filling than decadent. No such aid was waiting for the short rib Wellington ($20), a dish that pretends nouvelle cuisine never happened. It's classic in ingredients if not necessarily form. The meat is shredded and the duxelles regenerate into mushroom slices, but the puff pastry remains. Unfortunately, the whole thing was just short of leaden, even richer than the famously luxe original. Tradition is not a good enough reason for the generous scoop of pâté on top – a touch that took it from Rockefeller to Trump.

Lunch aims to be filling as well. There are a few salads and a vegetarian sandwich, but most of it wouldn't threaten the masculinity of the worst of the good ol' boys. The beef tenderloin ($20) would be the base of a three martini lunch if Fork served hard liquor. It's pure culinary nostalgia with its glossy mushroom demi-glace, but the superb execution makes it all gravy from there. The shrimp and grits ($20) are more forward-thinking. Goat cheese in the grits may be expected, but certainly not a savory application of vanilla butter. It was an interesting if not wholly cohesive flourish, and it reinforced the meal's weight. 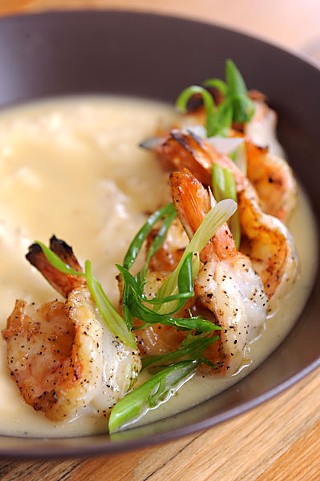 Despite all that, Stuerzenberger can definitely employ some buoyancy. His most successful dishes have plenty of pep. We wouldn't have guessed pretzels were used in the bread pudding ($8), but we could clearly taste the mustard. It was just enough to evoke the ballpark – peanuts and Cracker Jack included – but not enough to make it at all off-putting. Other highlights include the beet sopes ($8), greaseless, lithe masa rounds topped with kale, pepitas, and a goat cheese crema; grilled Gulf snapper ($26), a fillet rioting with citrus and anise flavors; and a side of simple grilled vegetables ($6), gussied up in a tureen, and dabbed with coconut curry. The snapper crudo ($15) was best of all, essentially a ceviche that has spent a transformative summer abroad. The leche de tigre, corn, and radish is still the same foundation, but the thinly sliced fish denies expectation.

The charcuterie board ($24) could barely bother, but that was most of its charm. There were no pickled Romanesco broccoli or slivered Marcona almonds. There was no attempt at mostarda abstract expressionism. Everything was piled carelessly, and it even broke some rules (there were two bleus, mon Dieu!). Many of the same ingredients (pickled grapes, the milder bleu) reappeared in the roasted mushroom salad ($14). It was as successful as the board, following the same unassuming template, and would have no doubt impressed were it not directly preceded by those same flavors. The broiled oyster starter ($8) was unpretentious too, if again erring on the side of lavishness. The brackish duo of bacon and cotija assured that we would order another beer.

Of course, sommelier Chris Howell has made that an exceedingly attractive proposition. The restaurant name may only mention the wine, but there's a dizzying array of craft beer (much of it local) on draft and bottled. And the beer selection pales to the page after page of wine options, ranging from affordable by-the-glass options to pay-your-mortgage-late bottles. It must take quite a bit of training for the staff (Howell was in the middle of a staff tasting during our dinner visit) to remember a portion of the list, but our server recited it with ease.

And that may just be the most important thing in impressing the neighborhood. Fork's version of fine dining isn't based on the equipment in the kitchen or something as nebulous as "concept." It's based on putting its customers perfectly at ease. All the heaviness notwithstanding, we still walked out feeling somehow lighter.

A version of this article appeared in print on March 13, 2015 with the headline: Setting the Scene