Taco Flats may be too laid-back

If someone were to develop a theme park based on the myth of lost Austin, let's call it Leslie World, the new iteration of Taco Flats would surely be in the food court. The original Taco Flats was a semi-legendary music venue, one of those storied dives that just happened at the right place and time. But nothing about the new Taco Flats feels coincidental. In its bald grab at nostalgic goodwill, you might as well have called it Quesadilla World Headquarters. 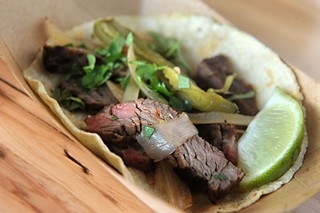 Yes, batons and blessings have been passed, but naming a sparkling renovation of a plumbing supply after the dive still feels a little hollow. The restaurant website's wistful "about" section says, "No one ever said Austin had to be shiny and new to be attractive," but that's just what Taco Flats delivers – even if there's plenty of vintage simulacra in the decor. The entry features a taxidermy javelina and the type of Naugahyde dude-ranch sofa that midcentury Better Homes and Gardens would have recommended for your rumpus room. The Fifties continue with fiberglass parchment fixtures, ahistorically oversized and the dining room's only real point of interest. There's shuffleboard and reclaimed barn wood and beer signs. It's all designed to scream, "We're laid-back."

But the seating seems more geared toward last-call slumps than midday lounging. That's fine at the bar, but awkward in the bank of banquettes, where cocktail tables literally bar you from your dining companions but keep you focused on SportsCenter. The server asked us to open a tab before ordering on a lunch visit, an odd touch for a full-service restaurant. Nervously, the entire operation seems to be searching for identity. Is it fast casual? A sports bar? A neighborhood haunt? A Xeroxed fanzine of all three? At a good taco joint, all that discord really wouldn't matter.

But the motto printed on the door invites customers to "come for the beer, stay for the tacos." Certainly, the large and thoughtfully local selection on tap is no joke, and the bar program also delivers with a tequila- and mezcal-heavy mix. As with the motto, the tacos don't always have first billing. The chicken mole ($5) was downright confounding. The mole component was appropriately dusky, although a bit of spice would have been welcome. The Mexican rice, however, required a few exploratory pokes of the fork. Cooked down to a granulated mush, it appeared as if the rice had been run through a ricer. One would swear it was sweet potato had it any flavor. The al pastor ($3.50) disappointed too. The pork was right, retaining just enough gentle chew; but the tiny bits of pineapple were raw, robbing the taco of the classic caramelized foil. That vapidity also infected the El Hippie ($4), where a smear of black bean was not enough to ground the briny escabeche.

But other tacos did strike the right balance. The carne asada's ($5) grilled jalapeño gives some oomph to fajita beef, while thinly sliced radishes give just enough tooth to the carnitas. The barbacoa's ($5) tongue lends fat to the leaner cheek, giving it uncommon tenderness. The brunch options stand out too, with a more than respectable migas taco ($4.50) and the earthy Mister Popeye ($4) – fried egg with avocado, pico, and spinach, natch. Regardless of filling, both the scratch flour and corn tortillas are a great foundation. Jicama "tortillas" are also available, should one be dietarily inclined.

We found mixed offerings in the appetizer section as well. Aggressive flavors masked any seafood sweetness in the tostadas de atun (market price of $17 on our visit). A heady squirt of lime amplified the aioli tang, sharpened further by the liberal use of habanero sea salt. It was something like sprinkling Twang on sashimi. Panchos ($13 with chicken), nachos by any other name, were far more successful. Somewhat miraculously, the house-made chips kept their crisp through the entire meal – even after being loaded with refried beans, guacamole, pico, and a healthy dollop of escabeche. Elote asado ($3.50) was fine, but could have used a bit of smoke or spice. The best dishes were a bit of a surprise. A place called Taco Flats should know its way around queso (free with the order of two tacos), but who would have thought a simply dressed salad – the Daily Greens ($7) – would be able to impress?

It's often said that a good salad is the mark of a good kitchen, and some of the mistakes seemed to indicate an occasional lack of care rather than a fundamental crack in the system. The elotes had a bit of the silk left on, foil was slapdashed on metal trays, and the chicken only lived on one side of the panchos. On the first visit, it took an excruciatingly long time to get the check (despite an almost empty dining room). On the second, everything was seamless. A little consistency will be needed before Taco Flats is really ready to roll. But maybe they are content to borrow from an Austin film icon. It would make a fine location should Richard Linklater decide to film a sequel.