Getting our goat on Braker

For Austin's goat meat lovers, Taquito Aviles is one of those brilliant taquerías that should be a bright blip on the foodie radar. The goat painted on the red trailer gives a visual clue of what to expect from the little spot sitting between the Palms Car Wash and an insurance business. The elusive parking lot entrance is a curb cut on Braker, on the north side of the insurance business, but many regulars just park on the side of the car wash.

Mario, the owner, came to Austin 14 years ago from Michoacán, and is one of the friendliest and most accommodating taqueros you'll ever meet. The menu is very complete for a taquería, but he also adds seasonal specials, based on what he finds at the market. During corn season he offers an exemplary elote, sweet caramelized grilled corn slathered with mayo, crema fresca, cheese, and chile, with a squeeze of lime. He'll slice it off of the cob to serve it as esquites if you ask. 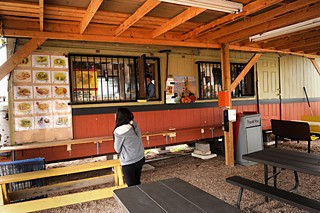 The soup special changes constantly. One day it was a caldo de res, but instead of bony beef, Mario's version was full of plump, delicious coarse-ground-beef-and-rice albóndigas, with a touch of cinnamon in the scintillating red chile broth. Another trip had superlative posole rojo, a rich and hearty hominy stew, spicy from dried chiles and with big chunks of pork. Yet another trip offered frijoles a la charra – typically a side dish – but here a luscious, creamy pinto bean soup loaded with sliced jalapeño, sausage, and pork. I'm not a tripe eater, but the folks I've seen eating his menudo seem transfixed.

Mario's rich consomé de chivo is superb, perhaps even better than the amazing version served at El Hidalguense in Houston. Aviles serves a steaming reddish-brown, aromatic broth that's loaded with tender goat, with a side bowl of onions and cilantro, lime wedges, and a stack of tortillas. It's almost a meal by itself, but you'd be crazy to not order a taco de chivo on the side, with mouthwatering meat in a red chile glaze. It's the perfect goat-centric feast.

We've sampled most of the taco meats (a bargain at $2 per taco), which are also available on gorditas, quesadillas, tortas, and nachos. The marinated pork adobado is braised in a spicy red chile sauce. The taco comes stuffed with grilled onions, a nice accompaniment with a lime squeeze. The chicken fajita comes out bulging with grilled chicken breasts that are tender and layered with flavor. Cabeza de res is the classic baked cow's head and cheek, cooked barbacoa style. Campechano is a tasty dual-blast of spicy beef picadillo and pork chorizo. Carnitas here are diced cubes of crispy pork that thankfully have some fat left on. Mario's delicious al pastor is pork pieces bathed in a deep red chile sauce redolent of pineapple, served with some caramelized onion. The cecina was the only meat taco filling that didn't knock me for a loop. The thin, seasoned sheets of beef are cooked and diced on a griddle and served with caramelized onions – flavorful but a tad tough.

I had to save the beef fajita, shrimp, and fish options for the next visit, along with the chicken enchiladas verdes. Mario also serves all of the expected breakfast taco options, all day long, for $1.25. He hedged when I asked him if the tortillas were homemade. They sure tasted like they were, but perhaps they came from the Tortilleria Rio Grande down the road. Whoever made them obviously knew what they were doing. He offers three excellent salsas: a spicy red that tastes of chile de árbol, a zippy jalapeño green with cilantro and lime, and a fruity yellow habanero. All three are first-rate. Do not leave Taquito Aviles without getting one of the icy fruit drinks. I had an aromatic grapefruit that tasted like the ripest Ruby Red that I have ever eaten. It was exceptionally good, but my neighbor scoffed, and said that I didn't know good until I've tasted the fresh pineapple. Yet another item to add to the list for the next visits (and there will be many).

"On the Cheap" is a recurring restaurant guide featuring price points under $10 per meal.