An icon makes a big comeback 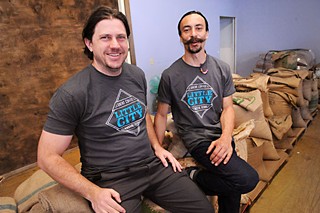 If you were to plot Austin's history through a chronology of coffee shops, a large chapter starts and stops with Little City.

Between 1993 and 2011, the Downtown location at 916 Congress kept a melting pot of Austinites caffeinated and cultured. Everyone from legislators to Leslie was welcome, and an army of bike messengers stood guard on the patio. Your barista could've been a rock star or sci-fi writer; your sandwich artist would later go on to open your favorite bar or helm the best barbecue pit in the galaxy. The mysterious woman one table over might've become your wife, or the cute guy in the corner could've become your husband (future laws permitting).

The cast of employees and regulars would go on to make big waves in Austin's cultural landscape, but they wouldn't have been there if not for the coffee. Little City started roasting beans in 1995 out of a new location at 34th and Guadalupe (it would later move eight blocks south). The beans would soon be adopted by other iconic shops like Jo's Coffee and Clementine (now Thunderbird), and their lineage of roasters would go on to fuel the fires at Casa Brasil, Barrett's, and Drip in Dallas. Unfortunately, rising rents near campus and a Downtown building buyout by a conservative think tank forced the shop to close prematurely.

Although the beans are still served at a few spots like Mother's and Counter Cafe, the Little City name has mainly become a piece of old-Austin nostalgia. But that's about to change. Helmed by Casa Brasil's Joel Shuler and Eric Detablan (who originally roasted at Little City), the brand is about to relaunch with a retail selection of expertly sourced blends and nuanced microlots that all taste fantastic, but don't require a Ph.D. in coffee studies to enjoy (be on the lookout for their Kickstarter in late March).

To tell the story of the company's growth from counterculture hangout to future staple on Central Market shelves, we tracked down former employees and regulars, and the new management, to share their memories and experiences at the shop. Their stories are best enjoyed alongside a quality cup of coffee. 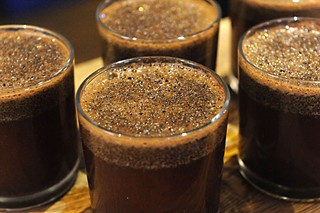 Donna Taylor, owner: Before opening Little City, my four partners and I had all graduated from UT and moved to San Francisco. I was working in a law office; they called me the coffee pixie.

Nathan Tate, founding partner: We missed Austin, we called it our "little city." We'd always be meeting up in coffee shops trying to figure out how to go back.

Taylor: Coffee shops were very much a part of the culture in SF, but they weren't in Austin yet. That was the inspiration: bringing some of the big city to the little city.

Tate: Back then there was Quackenbush's, Mojo's Daily Grind, and Metro. We weren't the first good shop, but we were one of the originals, and I'd like to say we were the best.

Taylor: The building on Congress had been vacant for about four years. I think it was Franklin Federal Savings; that went under with the savings and loan crash of '89.

Tate: When we opened up, it was design like Austin had never seen. We were the first people to do concrete stained floors and countertops, plaster, old billboard signs in the back.

Taylor: We were definitely a destination. We were actually busier at night than we were in the morning. It was like a big scene.

Tate: The first time my parents came, my dad said, "I don't understand this. It's Tuesday night, you're charging five bucks for a coffee, and there's a line out the door."

Chad Nichols, former coffee roaster, barista, and co-creator of The Intergalactic Nemesis: Little City was one of the few places in town that had a kind of cosmopolitan vibe. It wasn't a sloppy hippie hangout, where both the coffee and the ambience were afterthoughts. It had one of the few really good cups of espresso in the city.

Jim Hightower, regular customer, former Department of Agriculture commissioner: It was a place for coffee-lovers. They made very, very good coffee. It smelled right, it felt right, the conversations were right, it was just a total plus in your day.

Travis Kizer, co-owner at the Buzz Mill, roaster at Little City and Barrett's Micro Roast Coffee: The Little City signature blend changed over the years. It was a big difference between then and now. Indonesian coffees were a big part of the flavor profile of the original blend; it was super heavy, weighty, big-bodied, syrupy.

Eric Detablan, roaster at Little City and Casa Brasil: We'd like to reproduce it as close as possible, but not just the bean, the energy. Little City brought together all types of different cultures into one melting pot of Austin.

Joel Shuler, regular customer, founder of Casa Brasil: With relaunching the brand, our mantra is: "Everyone deserves a great cup of coffee." We want it to be accessible like the shop was. No judgments, no snobby people.

Tate: Our first write-up in Texas Monthly said something like, "Everything from Brooks Brothers to blue hair was welcome."

Detablan: There were a lot of people doing great things out of that place. It was a good place for starving artists.

Shuler: The coffee was the draw, but the food was also really great. And at the time it was really cheap.

Taylor: None of us had ever worked in a kitchen, so with the food we wanted to just keep it simple. That's why we just decided to do sandwiches and salads, but we made our own dressings and sauces to do something that was special and easy.

Tate: Back before people took pictures of their food, we had picture-worthy food. The coconut macaroons were just out of sight. And the sandwiches, there was nothing like that when we started. We were the first people to get mixed greens from a farm.

Jason Stevens, manager at Little City, director of spirits at Bar Congress and Wonderland: We did these family-style supper clubs – that was something unusual in Austin at the time. Those meals were about community. Having friends, regulars, employees, and strangers enjoy a delicious, simple meal together, along with dozens of bottles of amazing wine, was the definition of what Little City was to me.

Aaron Franklin, barbecue cult leader: I was just a sandwich artist. Did I pick up any skills that I use now? Maybe my knowledge of washing dishes. But Travis still roasts the coffee for the espresso sauce, and I originally opened the trailer in his back lot at Owl Tree, so there's the Little City connection.

Jason Reece, barista at Little City, drummer of Trail of Dead, Midnight Masses: Little City had its share of some really creative people that worked and hung out at the two locations. The flexibility allowed me to pursue my musical endeavors and I was thankful that they didn't fire my ass when I went out on tour.

Troy Nelsen, barista at Little City, partner at Black Sheep Lodge and Haymaker: On a few Saturday mornings my first customer of the day was Gibby Haynes from the Butthole Surfers with some blonde of the week. And he wasn't just waking up.

Shuler: Quentin Tarantino would come in all the time and they'd always fuck with him. No matter what he'd order, they'd always call out "Quentin Cappuccino!" and he'd get pissed.

Taylor: Sam Shepard used to come in when he was working on his screenplay, then all the secretaries saw him sitting on the front porch and that was over.

Taylor: It was just an amazing community of people. There are several regulars who are still my good friends now. I watched people's kids grow up and graduate from college.

Nelsen: Everyone who came through, you knew them by name and you'd have a little conversation. People want to have that exchange, like with a bartender. That's something that the best coffee shops have.

Ricardo Guimbarda, barista: I can easily say that working at Little City has been my favorite job of all time. Employees were happy to go to work. Customers were happy to spend time there. Donna Taylor should be credited for creating a community that will always be cherished for people who were a part of it.

Franklin: We'd just sit around listening to good music and drinking coffee and stuff, that was the fun of it. You worked there and also hung out there on your day off.

Detablan: It seemed like it was a full spectrum of people. Everything from the hipster college kid that moved to town to the old, really cool guy from Slacker to the most uptight business guy, but they were all really cool and could just get a working-class cup of coffee together.

Shuler: Austin's evolved like everywhere else, but what I really liked was that inclusive aspect of Austin. Everyone had access. It wasn't trying, it just kind of was.

Tate: It was just an amazing time in our lives. Austin still is the best city I've ever lived in, but I don't quite love it like I used to. It was cheap, everyone knew each other, we still had water in creeks. It was our little city, and it was the best.

Taylor: I kind of always left it open as to whether to start another shop, I've just never gotten the itch. But I'm excited to have coffee roasted after our tradition again, because for a long time it has been hard to find coffee that was as good as ours.