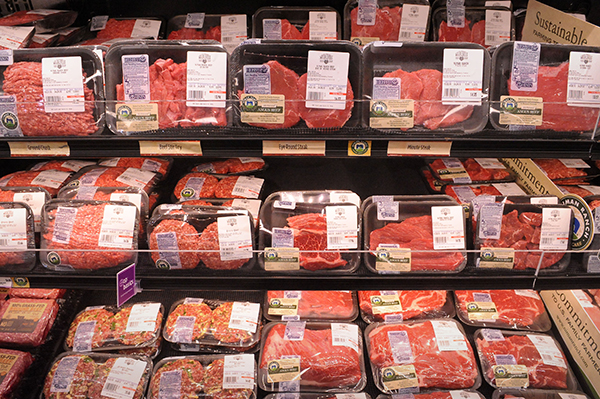 Whether eating meat is ethical is a debate that's not likely to be resolved anytime soon. But the argument for "humanely raised" meat is quickly becoming mainstream: Starbucks recently agreed to "phase out" its use of cage-raised poultry, among other things; California's Proposition 2, which took effect at the beginning of the year, requires that all eggs sold in the state come from chickens with room to stretch their wings; and here in Austin, it's become more and more common to see menus touting meat from suppliers such as Niman Ranch, which is well-known for its commitment to humane standards.

For those of us who have little or no contact with the source of our eggs, dairy, and meat, it can be disturbing to contemplate the reality of modern-day agriculture: Factory farms, emphasizing profit over all, tolerate and even promote practices that result in unmitigated misery for the animals involved, and heavy use of antibiotics to treat injuries and infections. Yet it's possible to purchase meat from places that adhere to standards of care that benefit the livestock and the consumer.

Niman Ranch, which was founded in the early Seventies, is perhaps the most prominent supplier of humanely raised meat. A network of "family farmers," all of whom are certified by respected third parties, its standards require that animals be given the opportunity to "behave naturally" and be fed a vegetarian diet. For cattle, this means the ability to move freely, exercise, and lie down. Sick animals are treated, but any that receive antibiotics aren't sold as Niman meat. The resulting product is not only more humane, but of a higher quality, since the meat comes from only healthy, well-fed animals. Niman's requirement that members of its network be "family farms" – "owned and operated by a single family ... who relies on that farm as primary source of income" – gives an advantage to smaller farmers who would struggle in the larger marketplace.

While Niman meat is used at a variety of Austin restaurants, including Uchiko and Fork & Vine, it can also be purchased at Wheatsville Co-op. The local grocer only stocks meat that's "sustainably raised," and doesn't contain artificial hormones or antibiotics. Wheatsville's buyers look for farms that use third-party certification to verify their practices, and build relationships with their suppliers, including visiting the farms when possible, in order to ensure the livestock is being raised humanely. Along with an assortment of cuts of pork and beef from Niman, Wheatsville carries certified organic and humane Smart Chicken from Nebraska-based Tecumseh Farms. Shoppers can also choose from a selection of fresh and frozen meat from more local suppliers, such as Dewberry Hills, Windy Hill, and Richardson farms.

Mark Maddy, Wheatsville's meat and seafood coordinator, gives last Thanksgiving as an example of the cooperative's commitment to providing its customers with as many good options as possible. "Local and organic in a turkey is sort of the holy grail," Maddy says. Wanting to offer fresh as well as frozen Thanksgiving turkeys, Wheatsville partnered with Coyote Creek Farm in Elgin. The farm, which sells organic feed and Jeremiah Cunningham's World's Best Eggs, had never raised turkeys before, but was willing to give it a shot. The turkeys were given plenty of room, access to the outdoors, and only fed certified organic feed. Maddy says Wheatsville plans to have the turkeys, which sold out last year, again this Thanksgiving.

All things being equal, who wouldn't prefer to eat the meat of a healthy, well-treated animal? But, of course, the reason that so many farm animals have it so bad is that it's cheaper to raise them that way. Raquel Dadomo, Wheatsville's brand manager, says that the cooperative is aware that not everyone feels like they can afford to buy high-quality meat. To that end, Wheatsville has rolled out Co-op Basics, a selection of staples with drastically reduced prices. Co-op Basics, which extend beyond the meat department, include ground beef at $4.99 per pound, whole chickens at $2.99 per pound, and individual eggs costing 19 cents each. The lower prices mean that Wheatsville makes less money off the items, but is able to serve a greater swath of the community.

The rise of kinder, gentler meat isn't going to convert every vegetarian into an omnivore – after all, even the most humane ranches can't avoid the fact that their animals are being raised for slaughter. However, it's heartening to see a shift away from the thoughtless cruelty that's been associated with meat production since Upton Sinclair wrote The Jungle in 1906. As the trend grows, it will be important to make sure that "humanely raised" claims retain meaning, rather than going the way of "all natural" and other empty buzzwords. Luckily, Austinites can look to stores such as Wheatsville to assure there's an actual difference in the meat they buy.

The original version of this article listed Uchi, Dai Due, and Fork & Taco as local restaurants serving Niman ranch meat. The Chronicle regrets the error.