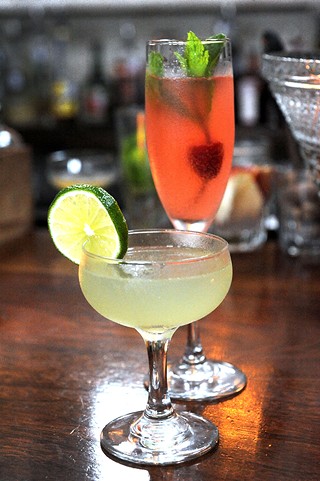 As soon as you take a seat at Whisler's the smell of fresh rosemary hits you, while your eyes wander from jars full of dried chiles de árbol to a container of fresh serranos to bottles of house-infused syrups and shrubs.

The bartenders here don't shy away from using culinary ingredients seldom found in cocktails. For example, the I Yam What I Yam gets its unique flavor profile from a fresh sweet potato shrub, which is as savory and tangy as a marinade. Seasoned with cinnamon and nutmeg, a bit of apple cider vinegar counteracts the cocktail's sweetness. It's a liquid version of your mom's sweet potato casserole, down to the toasted marshmallow garnish. 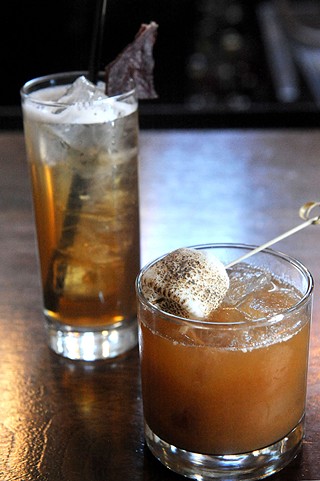 Whisler's is not the only bar in Austin using ingredients usually considered to be culinary, and I couldn't be more pleased with the trend. I've always gravitated toward savory drinks, but one can only drink so many Bloody Marys. When Midnight Cowboy opened in 2012, owner Bill Norris served me one of the best cocktails I've had: the South of Bangkok, featuring gin, coconut, fresh lime, Thai lime leaf bitters, and Thai basil. And a few years – and a few barmen – ago, East Side Show Room wowed me with the Zanahorita, a play on the margarita made with carrot juice as the base. Now, at the start of 2015, there are plenty more culinary cocktails on offer.

At a place like qui, you'd certainly expect culinary creativity to spill over from the kitchen to the bar. Order the Spanish Bombs, named after the Clash song, which combines Siembra Azul tequila reposado, Lacuesta vermouth, Benedictine, and a house-made sesame oil infusion. The result is boozy, subtly toasty, and has a slightly oily mouthfeel. The American Slang features bourbon, Kinsman Apricot Rakia Galliano, and Peychaud's bitters, served on the rocks. In classic qui style, it comes with a mouthful of basil seed "caviar" (when hydrated, basil seeds release a mucilaginous cover, making them look and feel like fish roe), perched atop a mother-of-pearl spoon inside a real caviar tin.

When it comes to applying kitchen techniques to the bar, smoking is, well, hot. Adding a smoky component to a drink with mezcal seems to be popular everywhere, but bartenders at restaurants where a smoker is the centerpiece of the kitchen are playing with the trend and smoking a variety of cocktail ingredients. At Contigo, Jen Keyser is working with kitchen staff to extend the restaurant's campfire to her bar program. Her latest experiment, which should be on the spring menu, includes smoked lemongrass. The folks at Freedmen's take it a step further by smoking pretty much everything. I love the Smokin' Cactus: Del Maguey Vida mezcal, grapefruit juice, lime juice, jalapeño-infused agave syrup, and a smoked sea-salt rim that accentuates the smokiness of mezcal. The Ol' Schmokey (Old Forester, smoked pecan bitters, smoked orange, sugar) pretty much speaks for itself. And I would be hard pressed to find a more savory fresh Bloody Mary – made with smoked tomatoes, of course.

Back at Whisler's, there are more culinary cocktails to tempt you. The Hornet's Nest is spicy and almost savory. Gin is infused with fresh puréed red bell pepper – there's a little bit of pulp after straining – and the drink gets a kick from the much-en vogue Ancho Reyes liqueur. The Battle Born features house-made sarsaparilla syrup with fresh vanilla bean and, for garnish, a chunk of peppery beef jerky that balances the sweet with some salty, as bar manager Matt Ross explains. I'm looking forward to the spring menu; I have my fingers crossed they'll bring back the Campechano. Inspired by Ross' favorite taco truck, the drink combines grilled pineapple juice, fresh lime, and mezcal infused with Spanish chorizo, cinnamon, and black pepper. Think tacos al pastor in a glass. 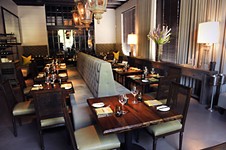