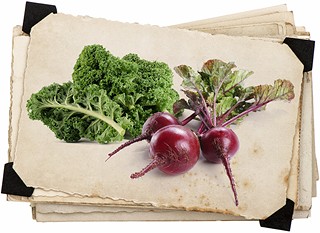 In the space of a week at the end of August 2014, I had occasion to try three new Austin eateries that make an effort to embrace a farm-to-table, seasonal locavore aesthetic. At each meal, the proteins were served with some variation of eggplant and okra. By the third time that duo of hardy, late-summer vegetables took its turn onstage, I had already eaten all the eggplant and okra I wanted for that week. No, eggplant and okra weren't trending (another annoying contributor to the problem entirely), they just happened to be the only vegetables still producing locally during the no-man's-land of late summer. But the effect was the same – I felt exactly the way I do when I encounter yet another crispy brussels sprouts treatment, a proliferation of poorly prepared pork belly, or one more beet dessert – I was struck by ingredient fatigue.

Of course, I can hear the sighs and see the eyes rolling from here. Ingredient fatigue, what a first-world problem! Well, of course it is, but then reviewing restaurants for an audience of people who eat out regularly and share photos of their meals on Instagram is a first-world kind of career. And in this day and age when dining out is the new entertainment, restaurants are the new theatre, and chefs are the new celebrities, ingredient fatigue is a real job hazard for people who write about food. Take the locavore movement, for example. While the concept of eating locally produced food in the season when it grows naturally is generally considered to be a good thing, following that directive can be a challenge for chefs in Central Texas.

When you take into consideration the fickle weather, the persistent drought, and the fact that the volume of produce grown locally couldn't begin to sustain all the restaurants flying the farm-to-table banner, it's no wonder we're skeptical when we read menu advisories that say, "We source our ingredients locally whenever possible." That statement covers a mighty big territory, everywhere from our chef went to the farmers' market once three years ago and it hasn't been possible to go back, to those out-of-season tomatoes on our Caprese salad grown hydroponically in a yurt on the desert, to serving eggplant and okra daily during August and September. So, what's a locavore chef to do? Realistically, in my job you just hope they do their best work with the finest possible ingredients, regardless of their geographical provenance.

As if the locavore challenge weren't disconcerting enough for a restaurant critic, the propensity for chefs to pile on the trend bandwagon can really damage a menu. Yes, pork belly has been trending for a few years now, but that doesn't mean that every menu is enhanced by a tough, greasy rendition of that particular cut of pork. Just because everybody's doing it does not mean everybody can do it well. And it's not just pork belly, believe me. The decadelong trend of molten chocolate cakes finally passed, but now vegetables are showing up in desserts and pastries, and there's a generous dusting of salt on everything sweet, whether it needs it or not. This trend is genuinely distressing for a dessert lover with a serious sweet tooth. Just because someone can make salted beet ice cream does not necessarily mean they should.

Brussels sprouts and beets have certainly enjoyed their time in the spotlight, both nationally and locally. Turns out both vegetables grow well here, and savvy farmers such as Carol Ann Sayle at Boggy Creek have inspired chefs to add variations with the greens for both plants, but they still show up too often for my taste. We can thank a generation of chefs from Uchi, Uchiko, and East Side King for all the crispy brussels sprouts imitators, sort of like the turn-of-the-century years when many local chefs felt compelled to present their version of David Garrido's oyster nachos on yucca root chips. Kale is riding high these days, even having inspired its own cookbook, 50 Shades of Kale – seriously. The cruciferous green will probably maintain trend status for a while yet, appearing in everything from smoothies to the currently ubiquitous kale salads.

Regarding trending ingredients, unless you've got something truly innovative up your sleeve like the Hightower's peanut butter brussels sprouts or 40 North's kale pizza, in the immortal words of the cryokinetic Princess Elsa, let it go. However, cauliflower appears to be ascending the veggie trend throne. Apparently cauliflower can be transformed into everything from creamy soups to risotto to "steaks," all of which I fully expect to discover on local menus sometime in the coming year.