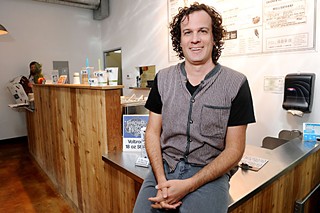 David Ansel is happier than he's ever been and every bit as proud as any father of twins could possibly be. However, the twins he's excited about aren't actual babies. In the fall of 2014, Ansel added two very important components to his 13-year-old soup business – a full-fledged commissary kitchen and a sleek new retail store with both counter service for folks who would like to eat in, as well as food to grab and go. He likens the experience to that of having twins because delivering both outlets in the same time frame was a difficult but rewarding struggle, and both have enriched his life. "We had to have the commissary in order to supply the new store or contemplate any more growth, so they ended up coming at about the same time," Ansel explains.

Ansel's business has come a long way. In the beginning, his charming little neighborhood endeavor involved cooking up pots of soup at home and delivering them to his friends in South Austin from a cooler nestled in a baby stroller behind his bicycle. Folks found the soups and the business model appealing, and before long, Ansel had rented a small storefront in a funky old strip center on the banks of Bouldin Creek. As the soup business grew, he leased more space in the center, added more soups to the product line, and sent them to his hungry customers in colorful refrigerated delivery trucks. The menu eventually included soups, entrée casseroles, side dishes, salads, and desserts. The Soup Peddler became a vibrant part of the Austin food scene a few years into the new millennium, the subject of newspaper and magazine stories, television segments, and a cookbook titled The Soup Peddler's Slow & Difficult Soups: Recipes and Reveries.

Ansel's first foray outside of the original Bouldin Creek location (501 W. Mary) was a brightly painted kiosk at 2801 S. Lamar where soup lovers could pick up their favorite soups as well as fresh juices and smoothies from what was then the Daily Juice. The two offerings complemented each other and helped make both seasonal businesses more viable year-round, prompting Ansel to add fresh juices and smoothies to his main product line. The kiosk was also located near Amy and Steve Simmons' first Austinville development that included an Amy's Ice Creams, a Phil's Ice House, and the first Papalote Taco shop. The synergy of all that local deliciousness in one block proved to be good for everyone involved, so when the Simmons began working on the second Austinville near Cedar Park, David Ansel was one of the other culinary entrepreneurs they invited to come along.

Ansel found the idea of growth appealing for the company that is now known as Soup Peddler – Real Food & Juice Bar, but he knew the hard-used and dilapidated old kitchen facility at the original location could not sustain another busy retail outlet. This is the point where the twins began to gestate. "We started looking for commissary space and discovered this miracle deal on Craigslist. It was an old convenience store in far South Austin that had been turned into a tamale factory at some point. The owners were willing to build it out to suit a good new tenant," Ansel recalls. With all the enthusiasm of a new parent, Ansel describes how the building was gutted and redone with completely new plumbing, wiring, vent hoods, air conditioning, and refrigeration. He extols the virtues of the 100-gallon soup kettle, the two 40-gallon tilt skillets, and the blast chiller that makes it possible to chill soups more safely and quickly to extend their shelf life. "It's a perfect soup factory and the keystone for expansion into the stores. Now that we've been working in a facility that was actually designed to make soup and our other food items, I can't believe that we were ever able to accomplish anything in the other building. Our new chef, Ari Dvorin, and all the employees are in heaven. It's a whole new day for the business."

While Ansel admits that developing the commissary at the same time as putting together a new retail outlet on the other end of town presented some challenges, the successful launch of both entities already has him thinking about more expansion. The newest location (13219 Hwy. 183 N.) is distinctively different from the original retail outlet or the kiosk. It's a quick casual restaurant offering counter service with spaces to eat inside or out. The interior is very simple, bright and airy with concrete floors, and little in the way of decor. Fresh, clean food is obviously meant to be the main attraction here. According to Ansel, the Anderson Mill-area clientele has somewhat different culinary preferences than South Austin. They like more meaty soups – chicken and rice is the hands-down favorite – order less juices and smoothies, and devour grilled cheese and grilled turkey sandwiches. He reports there's regularly a line out the door at lunch time, but people are fed quickly, and the new store already outsells the long-established kiosk down south three or four days a week. Ansel is so happy about the new kids, he's contemplating another birth, possibly in Westlake Hills.