All About That Banchan 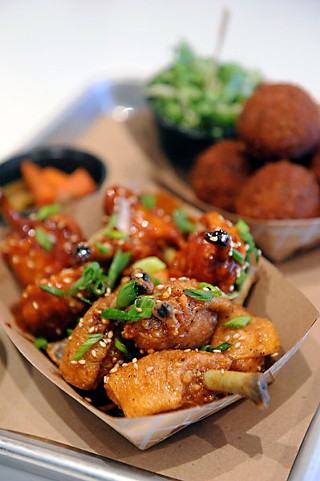 On a recent Sunday afternoon, we took our children for lunch at Chosun Galbi, the unassuming Korean BBQ joint behind Highland Mall. The waiter took our order – beef bulgogi and sam gyeob sal, thick rounds of uncured pork belly – then turned on the tabletop grill upon which we would eventually cook our food. The kids' eyes widened – while they have become aficionados of the hot rock at Uchi, learned to love our weekend outings for dim sum, and tolerate our northward treks for Sichuan-style spicy fish at Asia Cafe, Korean food hasn't been on our family radar at all. This was an entirely new experience for them, and they couldn't wait to dive in.

My grade-school kids are not alone in their inexperience with Korean food and its intricacies. Without a celebrity chef to promote it, Korean food is like the redheaded stepchild of Asian grub in Austin, the Jan Brady to the Marcia-Marcia-Marcia of trends like ramen and bánh mì. Now, as more and more new residents flock to the capital city, it might be time for Korean food to have its time in the spotlight.

It has taken a while for the Korean population in Austin to expand; in fact, the history of Koreans in Texas is fairly short. In 1970, there were a whopping 2,090 Koreans in the state, and those can be attributed primarily to war brides and a slow trickle of immigrants resulting from the liberal 1965 Immigration and Nationality Act, which lifted restrictive quotas that had depressed Asian migration to the states for decades.

Forty years later, in 2010, there were nearly 50,000 Asians in Austin alone (Dallas and Houston lay claim to three-fourths of the 955,531 Asians residing in Texas). According to the Greater Austin Asian Chamber of Commerce, Koreans comprise a little more than 11% of Austin's Asian-heritage residents. This makes Koreans the third-most populous Asian population in Austin, with those hailing from India comprising 18.2% and Vietnam 18.1%.

You can trace the influence of government policies, economic booms, and the aftereffects of war in the ebb and flow of "ethnic" restaurants in Austin. An investigation of the Austin City Directories from 1975-1985 reveals a slow-moving groundswell of Asian restaurants, most of them Chinese, with a Japanese steakhouse or two popping up here and there (there was even a Thai restaurant in 1979). But Korea House – arguably Austin's first Korean restaurant – didn't arrive on the scene until 1984. For a good 20 years, it was practically the only game in town.

Indeed, Korean food wasn't really a presence on the Austin dining scene until the mid-Aughts, approximately. Even the big chains emanating from Korea – namely, frozen-yogurt competitors Red Mango and Pinkberry, and Tous Les Jours, a French-Asian bakery – didn't plant their flags here until 2010. And, among the slowly mushrooming population of Korean restaurants in town, few pass the authenticity sniff test performed by discriminating, informed diners, and according to Melody Fury, Austin diners are partially to blame.

Fury, an entrepreneur and the blogger behind GourmetFury.com, says, "Dallas and Houston simply have larger Asian populations than Austin. Therefore, people naturally have higher standards and demand more authenticity and innovation.

"Beyond that, I think that Austinites are generally happy to settle for the 'hip' spots that forsake authenticity in lieu of cool-factor. Many Austinites I've met, depending on where they're from, have simply never been exposed to a diverse range of cuisines. So combine those reasons, along with a tinge of fear for new foods, and you get what we typically see: over-the-top cult following for Asian restaurants marketed towards the cool kids, and immigrants watering down their menu to accommodate for the unbudging American palate."

One of Fury's complaints about the Korean restaurants in Austin is that they "lump a bunch of generic or even Americanized dishes together on a menu without acknowledging region or specialty." While Korean food can be a bit impenetrable to the uninformed American diner due to variables like language, culture, and, uh, geopolitical complications, sorting it out by region doesn't unmuddy the waters in the slightest. As a relative newcomer to Korean food, I have found it helpful to start with the major dishes and ingredients and narrow my focus from there.

For protein, pork and beef are the way to go. Beef bulgogi – thin strips of sirloin marinated in soy sauce, sugar, sesame oil, garlic, and pepper, then grilled – is probably the most well-known Korean dish in the states. Bibimbap is another signature dish; it's a simple bed of warm rice (bap = rice) topped with mixed vegetables, beef, and a fried egg. Traditional preparations of bibimbap are also deeply symbolic, with the bright colors of the dish (green, red, yellow, white, and black) representing balance among the major organs of the body. Order dolsot bibimbap at Arirang (6801 Airport) and your dish will arrive in a searing-hot stone bowl that sizzles everything that comes in contact with it, making the rice lining the bowl extra crispy and nutty.

At Chosun Galbi (713 E. Huntland), the specialty of the house is the titular marinated beef ribs (galbi = rib), which arrive at your table splayed on a giant platter and placed on the tabletop grill after it has been seasoned with an onion. The meat is accompanied by an assortment of banchan, small side dishes comprising various pickled and seasoned vegetables, such as cucumbers slathered in gochujang red chili paste, kimchi, and paper-thin rounds of daikon radish. You're meant to eat the meat ssam-style, placed inside a lettuce leaf along with rice and seasonings like doenjang (soybean paste). It's not a generic, Americanized lettuce wrap à la P.F. Chang's, but rather a tidy, one-bite package full of balanced flavor.

A few years back, a Korean restaurant in Los Angeles called KyoChon catapulted Korean Fried Chicken ("KFC" or yangnyeom) into the culinary spotlight. The chicken is cut into small pieces, dipped into a thin batter, and fried twice. The result is a pleasantly crunchy, minimally greasy bite. Rockin Rice (6808 N. Lamar) has established itself as the go-to Austin spot for KFC.

On a recent lunch excursion to Korea House, my friend ordered a bowl of kimchi jjigae, a thick stew (jjigae is thicker than guk and tang, which are thinner, broth-based soups) made with the fermented Napa cabbage condiment that's all the rage among the paleo and fermentation sets these days, huge chunks of soft tofu, and small pieces of pork. The stew arrived at the table still boiling in its bowl, and it was the perfect antidote to a wet, dreary day. (We also reckoned it would be an excellent hangover food, not that we would ever have experience with that.)

Fury, who grew up in Vancouver, B.C., and has a good sense of exceptional Korean food, has some advice as to what to look for: First, you want high-quality meats. "If you're served chewy, sinewy cuts, you're being punked," she says.

The same goes for tofu: "Tofu is not an afterthought or a vegetarian alternative in this cuisine. The quality of the tofu is usually an indicator of the restaurant's rank." She also looks for an excellent broth and complex, ripened kimchi as indicators of a Korean restaurant's quality.

Obviously, this information merely functions as training wheels for the Korean-food novice, especially since some aspects of the cuisine do edge into Andrew Zimmern territory (raw, fermented seafood or live baby octopus, anyone?). Luckily for newbies who are Korean-curious but worry about putting the "test" in "intestine," or fear they might look or feel foolish when faced with a new vocabulary or a language barrier, there are a couple of joints in town that provide user-friendly entry points. Jae Kim, the proprietor of the food truck-turned-brick-and-mortar Chi'lantro made Korean food approachable with his "Korean BBQ-inspired" fusion menu of kimchi fries, bulgogi quesadillas, and a bibimbap-inspired spicy chicken rice bowl.

Building on that ethos but with a small, easily parsed menu of traditional comfort foods is Korean Komfort, launched in March 2014 by Hugh Suh, Paul Cho, and Min Choe. All South Korea-born, they found themselves virtually bereft of choices when it came to finding the food of their youth in local restaurants. "It's easier to find in big cities," says Suh. The menu, comprising six items including KFC-style wings, kimchi fried rice, bulgogi, and bibimbap, was developed by Choe's wife, Jenna, who learned the recipes from her mother and grandmother in Korea. "It really does feel like eating home cooking for us," says Suh. The truck, currently situated in the Rio Rancho food court in West Campus, has enjoyed enough success through social media and word-of-mouth that the team is already eyeing expansion opportunities.

There's really no reason why some of the Korean restaurants in Austin shouldn't be as popular as other local Asian eateries. There's plenty of delicious food to be had for the adventurous diner who's willing to do a little leg work and creep out of her comfort zone. (My kids aren't there yet: Our younger child opted only to eat the rice at Chosun Galbi, and our son would only eat the meat. Baby steps.) If you're not willing to eat something weird or are intimidated by any language barriers, at the very least, says Fury, "Ask your Asian friend to pick the restaurant next time."