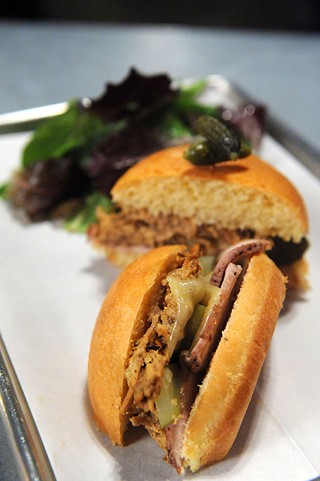 
At first glance, Native Family Co. may seem about as Midwestern as the Centre Georges Pompidou. There's no trace of Cincinnati chili, no horseshoe sandwich piled high. And if you are looking for hotdish, you'll have to make do with flambé. There's a voice in this cooking, but it's not Garrison Keillor's baritone.

But maybe that surprise speaks to a culinary prejudice that developed concurrently with Austin's deepening palate. Our own foodways and traditions are sanctified, while we posit Midwest cooks as bumbling Rose Nylunds. We forget the cosmopolitan Mary Richards, that Michelin just published a new Chicago guide. We certainly aren't the only area of the country that has realized that global can be regional.

Native's menu may use the occasional accent mark, but there's a lot of hometown pride in the actual food. Co-owner Olivia Genthe and chef Ray McConaghy are both from Cleveland, while co-owner Ryan Genthe is from Detroit*, and while they do not belabor the point, there are nods to Midwest tradition in everything from the hand-embroidered aprons to the deckled, yellowed paper that lends a little Junior League flair to the menus. Native is clearly concerned about the details.

Those Midwestern details appear in the food as well. The Cubicano ($11), their take on the Cuban sandwich, uses all the classic components but with ballpark Bertman's mustard and "Detroit Pickles" – both showcasing an agility with pork. The cheese and charcuterie boards ($23 big, $15 small) use salami from Iowa (La Quercia) and cured sausage from Indiana (Smoking Goose). The clothbound cheese is from Vermont, but it's heartland Cheddar. Sardines on toast ($7) relies on the classic Italian pairing of tomato, but here it is served as a zesty compote.

Oddly, that dish tastes less fishy than harvest salad ($9). The ingredients set things up nicely; greens meet fennel, pomegranate seeds, and more of the Cabot. But one has to spelunk to find licorice or tart in the heavily anchovied dressing. It's clear where they were going, and a salad served at a bar does need punch, but it longed for balance. The pâté (served on the board), subs chicken heart for liver, but was rich enough on its own without the lardy stud. The caprese panini ($7) feels like the dreaded "vegetarian option," but we're not sure how many grumbles they would get if it were replaced by their lamented pot pie flight. That flight showcases the heart of Native's cooking, much like the clever Reuben meatball that first put them on our radar.

Or the onion soup flambé ($5). Its appearance on the Applebee's and Jason's Deli menus notwithstanding, French onion soup isn't a dish that is so easy to get right. In many cases, seasoning and fat try to make up for a lack of proper caramelization, a process that not every kitchen has the time or inclination to achieve. Native niftily gets around the issue by using Mark Bittman-style charred onions and setting the whole thing aflame (we'll forgive them the minor menu affectation of listing "fire" as an ingredient). Normally such showmanship is an unnecessary vulgarity, but the flame does mellow out the whiskey, adding complex sweetness to the resulting dish. It's what is meant by the term "creature comforts."

We're just not sure that a bar is the best place to serve such comfort. As a dive, the Firehouse Lounge has much to offer – few seats in town can boast as engaging people-watching as their dishabille banquettes. But the dark corners that make for intriguing tête-à-têtes also make it difficult to see the composition of dishes. The rumble of "Get Ur Freak On" that makes for a party at 11pm, makes it hard to discuss what to order at 6pm. It's commonly profitable for trailers to hitch their wagon to a bar – they fill complementary needs – but they usually have the benefit of patios. At Firehouse, one can't escape.

Then again, with cocktail in hand, one might not want to.

*The original version of this article stated that Ryan Genthe is from Cleveland. Genthe is actually from Detroit. We apologize for any distress that may have caused Michigan fans.

A version of this article appeared in print on January 23, 2015 with the headline: From Ohio