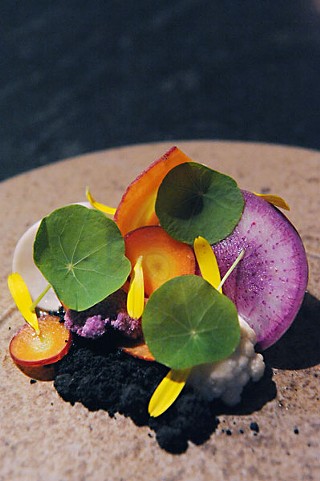 
It's tempting to squeeze Andrew Wiseheart and Ben Edgerton's sibling restaurants into a Beatrix Potter narrative. Contigo is the country mouse – happy with the slow pace and hospitality of small town Texas (albeit a small town where Wagyu is in plentiful supply). Gardner is the city mouse – adept at pomp and politesse, quite taken with the pleasures of the new.

It's tempting, but that story isn't entirely accurate. Gardner's dining room is more elegant than Contigo's rancho deluxe and you'll find Keith Kreeger porcelain instead of waxed paper boats, but Gardner hasn't loaded up the truck and moved to Bev-er-lee. Despite the minimalist Scandinavian esthetic, the glistening stainless kitchen, and the gracefully curved flatware, Gardner still has a bit of the farm in it. It may be gussied up, but it still has an accent.

For one, the white server "uniform" has a sort of salt-scrubbed, Andrew Wyeth-meets-Children of the Corn naiveté. Then, there's the stoneware, all of it rough-hewn and none of it quite white. There's gnarled bits of wood here and there, but no other decoration. Were it not for the warmness of the staff, it would feel like a Primitive Baptist church. The narrow skylight certainly aspires to be a steeple.

There's lots of reaching upward. Gardner's seasonal menu isn't quite severe, but there's not a lot of whimsy. Technique is never used for novelty; processed ingredients never show up for high-low acrobatics. The front end, led by Roberto Ainslie, could probably recite the menu alphabetically if you asked them. Even the kitchen, visible from the dining room, has an ecclesiastical calm. Maybe they've been force fed St. John's wort, but more likely they are not getting the workout they deserve. There were barely a few customers on both visits, and one of the servers was careful to explain the concept. It's vegetable forward not vegetarian, the "bites" are not appetizers per se, it's locally sourced but not quite farm-to-table. It's just thoughtful food. We're not sure where any confusion would lie.

Still, those who grumble have spent much time online, bemoaning the perceived value of those bites. Yes, they are true to their name, barely larger than an amuse-bouche. And yes, one can buy tacos at the same price point. One can also buy a Washington Redskins ticket, but neither will bring as much pleasure as Gardner's tiny baubles. The brussels sprout ($3) and cauliflower ($3) avoids brassica ennui with young garlic and raisins, respectively. The crudité ($3), only thick enough to maintain some snap, matches lush mascarpone with black olive soil. Pearled with créme fraîche, the chicken skin ($3) had the sweet/salty equilibrium of Japanese toast. Only the raw beef ($4) failed to elicit unqualified raves. Rolled like a dolma, the dish could have used its touch of acid. Still, the weightless potato flakes had all the pleasure of the last few crumbs in a bag. 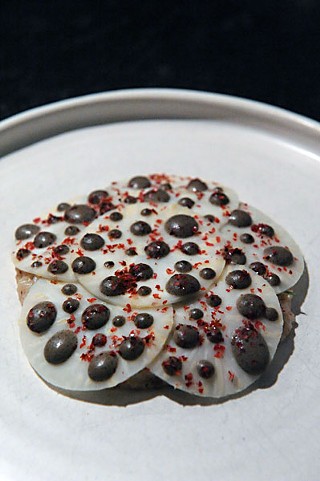 The bites have to make their point quickly, but the "first" plates linger long enough for a full conversation. Initially, the cured cobia's ($13) tarragon seems to be longing for its traditional lemony mate, but the dish develops throughout. Whey's zing makes an affable substitute, tempered somewhat with earthen turnip. Cabbage ($11) likewise takes a couple of seconds to develop, using jalapeño in a way that almost feels French. The broccoli ($8) and carrot ($9) dishes are both fine, if perhaps more in the spirit of sides, but neither fully conveys what the kitchen is capable of. They saved that for the beets ($9). That dish is a rejoinder to all the bland local roasts, served with a terrifically zippy urfa aïoli and a pine nut brittle. The root is not grounded one bit.

Indeed, few Austin restaurants use roots as effectively as Gardner. The monkfish ($29), although perfectly cooked and luxuriating in squid ink, would have been gloomy without the artichoke punch of the salsify. Likewise, the dried aged beef ($34), requested rare, would have been steakhouse standard without sweet potato (sprinkled with more fresh tarragon) and black garlic. The best "second" (Gardner for entrée) dish showcases the root alone. The celery root ($25) is a gorgeous mandala, dusted with pink peppercorn and dotted with beads of black truffle. Underneath is a sort of risotto of Carolina Gold rice. Not a root, but just as good are the brassicas ($18), with dandelion greens, toasted farro, and preserved lemon. The chili broth, poured tableside, is an olfactory delight.

Cutesiness can mar the desserts of some of Austin's finest kitchens, victims of the particularly local compulsion toward false nostalgia. Steven Cak's desserts evoke memory, but there's something more complicated going on than the mere borrowing of bygone forms. The Japanese pumpkin is an idea of winter, with subtle wintergreen and citrus bitter. The sweeter milk chocolate feels like a child's celebration – not because it lacks sophistication (sunchoke and anise are hardly Fisher Price), but because there's a sort of innocence in the chunks of cake. Both are enjoyable, but neither hold a candle to the apple, the most revelatory Austin dessert since Uchiko's Tobacco Cream. Much hullabaloo has been raised over the audaciousness of the dessert's use of hay, but it isn't a gimmick. With the hazelnut and dual apple (gelee and fresh), the dessert is a fantasy of rural Americana – hayrides, bonfires, barn dances.

If there's a minor quibble, it's in the wine list. It could have used a lighter red (Gamay does show up in a Rosé blend), for more versatile pairing with the wildly varying flavor profiles. The server's educated suggestions were perfectly fine, but a dedicated beverage director or sommelier (Paul Courtright has recently departed) might have suggested a better traveling partner. That repartee or not, it still was a lovely journey.

A version of this article appeared in print on January 16, 2015 with the headline: Town and Country