The Most Important Meal

It's time for Austin to have breakfast 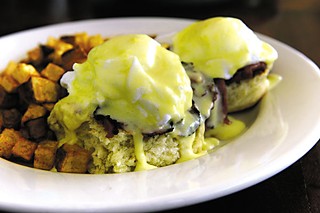 Every so often, there's a year like the last. Willful and overbearing, it didn't much care if I had other plans. Things would be done a certain way, whether I liked it or not. So it wasn't much surprise when my cat died in the waning weeks of the year. 2014 always took great joy in being a bastard.

Vanja had been around for most of my adult life, through leopard spotted hair, business-casual khakis, and both skinny and boot cut jeans. For his part, he was always the same – vocal, prone to drooling, occasionally a little mean. The night he died, I cried for two hours straight, calming down only enough to catch the occasional lump in my throat. I passed out still sniffling. And when I woke up, I went out for breakfast.

In some respects, that search for a.m. comfort was cellular. I had almost a bodily need to return to the carelessness of youth. It was then that, with few exceptions, my mother made breakfast seven days a week, an endless parade of hard boiled eggs, superbly crisped bacon, and biscuits. Bowls of cereal in front of the TV. 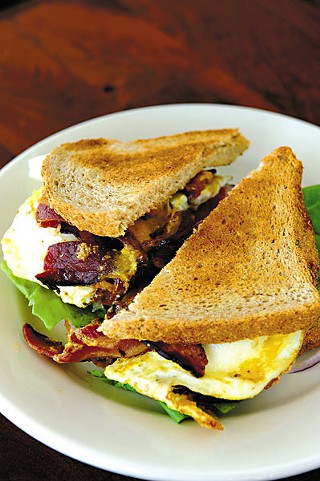 My family particularly liked Eggs Goldenrod, a recipe that stealthily introduced béchamel to home ec. (we usually dropped Betty Crocker's 1956 "à la Goldenrod" affectation unless in gentle mocking). It's not much more than toast and white gravy, but breakfast never needs flash. My younger brother made it the day after this Thanksgiving, when almost all of us had the first tickles of the flu. Even then, it was pure comfort.

Most families undoubtedly have similar specialties – Dad's famous flapjacks or Aunt Sally's cinnamon bread. They may not even be that good. It's more important that they are static. Nouvelle cuisine, molecular gastronomy, fusion, even New American primarily attacked dinner. Some of the boldest culinary thinkers never saw the need to reinvent the morning meal. Breakfast was allowed to continue its simple, nurturing mission.

The breakfast sandwich recipe Maud C. Cook proposed in a 1897 cookbook – fried with egg and chopped meat – isn't all that different from the one Foreign & Domestic serves every weekend. Bacon has been a staple since the 17th century. The Pennsylvania Dutch gave them another name, but over easy eggs have always been, well, easy.

If the dish I had in mourning wasn't exactly what I grew up eating (I can't recall Mom ever poaching an egg, much less serving one in a bowl), Counter Cafe's mound of cheese grits and braised collards was hardly radical. Breakfast wasn't meant to confuse. There was comfort in the familiarity – just enough bitter in the greens and enough cream in the starch. Yes, there was still sting in my eyes, but in that pause, the albumen was enough to coat. Somewhere in those first few bites, I started feeling a little better.

With breakfast, there is a subtle promise of starting over, something I would feel the need to do last year more times than I care to admit. But I wasn't the only one. The whole nation seemed on the verge of hitting reset, terrified of disease or violence overseas. Fashion played at being Kelly Kapowski, music played at being Crystal Waters, politics played at being George H.W. Bush. And another Nineties diva, Faith Popcorn, made a comeback as a new generation discovered cocooning.

You can't call classicism a trend exactly, but breakfast was popping up all over Austin. Our city had always had our morning favorites. Heck, Kerbey Lane built an empire out of eggs. But suddenly buzz eateries embraced the early hours too. Food folks rhapsodized about venison sausage with biscuits and gravy at Dai Due. Sawyer and Co. warmed us with steel cut oatmeal and omelet specials every weekday, and Noble Sandwich Co.'s waffle maker worked overtime. Austin had always been a brunch town, all woozy mimosas and hollandaise. But somehow 2014 needed to be more sober.

In 2014, breakfast was my easiest respite. In previous years, it had become more about ritual than sustenance, something done only a few times a year. A coffee and a pastry was enough most days, or a taco if I had a few minutes more. They kept me from fainting before lunch, but none of those things are breakfast. Breakfast is knife and fork, a proper plate, and a salt shaker. You can't get all that by shoving a drive-time tortilla in your mouth.

It's hard to envision an Austin without its foil-wrapped scepter, but it seems long since past time for Austin to sit down. I'll admit my observations may be clouded by a bit of personal gloom (it was a tough year, and I reserve the right to feel sorry for myself), but Austin seems to have become less friendly in the decade I have lived here. It's difficult to say hello when you never stop.

Previous divisions never seemed that important in the chill of Barton Springs, but in 2014 they were hard to ignore – no more so than in the continued proliferation of restaurants that increasingly few can afford. That's not to bite the hand that quite literally feeds me. I believe art deserves to be bought. But I also believe art deserves access. And some of the most lauded local chefs will serve breakfast for under $15. The tech job is optional.

It's a small price to pay for the power of healing. Nothing really changed as I sopped up the last yolk at Counter Cafe. The strong coffee only made me a little less bleary. Vanja's absence would still leave a hole. Austin would still struggle with the city it wanted to be. But for the moment, napkin on the table, it would be all right.