The 2014 tastes we just couldn't stop thinking about 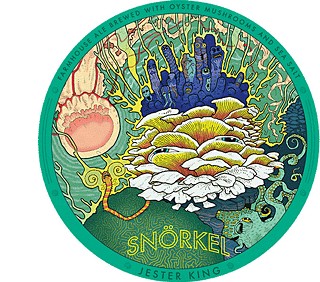 6) INDEPENDENCE BREWING POWER & LIGHT Designed by Jose Canales, the Power & Light label's midcentury art deco style is mirrored in its typography and color scheme. Inspired by Austin's Seaholm Power Plant, the label is at once simple and iconic.

7) UNCLE BILLY'S BREWERY GREEN ROOM IPA The brainchild of the former Uncle Billy's brewmaster Michael Waters, the label reads as a Ziggy Stardust-influenced exercise in hop worship. Borderline obscene, the label somehow pulls off "hop juice," without eliciting a dry heave. As part of a rebranding effort, the label will soon be discontinued. Get it while it's glam.

8) ODDWOOD ALES SAISON Flannel shirts, beer, and beards were around long before the much maligned "lumbersexual." Designed by Thuy Pham and Sixto-Juan Zavala and inspired by paintings of Abraham Lincoln chopping wood, the working man featured on the picturesque label for the Oddwood Ales Saison is an ode to the saison style of beer, first brewed to quench the thirst of farmhands.

9) OASIS TEXAS BREWING SLOW RIDE Influenced by Dazed and Confused, the color and font of the Slow Ride label will take you back to muscle cars and 8-tracks. A subtle tire tread and small details abound for the keen eye, lending a classic Americana feel for a classic American pale ale.

10) HOPS & GRAIN PORTER CULTURE Like Slow Ride, the label for this Baltic porter has a specific Seventies feel. Bright purple, "de corous" and Foxy Brown-esque, Porter Culture is ready for the disco.