With today's mocktails, who needs the hard stuff? 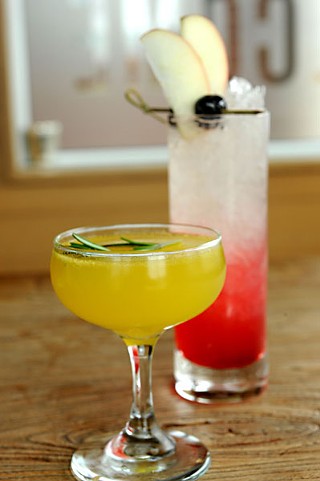 In the past, mocktails were an afterthought – geared toward people who can't drink for some reason. "Non-alcoholic beverages have long been associated with pregnant patrons, the underage kid who is tagging along on Mom & Dad's night out, or perhaps businessmen/women on a client meeting during lunch," says Jessica Sanders, co-owner of craft cocktail haven Drink.Well. Add those in recovery and the strictly religious and teetotaling got a bad wrap. At least it didn't seem to be very much fun.

But increasingly, even regular drinkers are choosing to have alcohol-free outings. "Maybe they tied one on a bit too hard the night prior, or they're working toward a fitness goal, or they're the designated driver for a group of friends," Sanders says. "They shouldn't be left out of the party completely just because they can't be the life of it."

Sanders also notes that having alcohol in every drink limits the number of drinks one can consume over the course of an evening. Low- and no-alcohol options make available the expertise and skill of a good bartender even when one doesn't want spirits involved. "It allows guests to experience the flavor point of view and creative voice of a bar in a really unique way that doesn't rely on hard booze to tell that story," she says.

Unfortunately, that story could use a little character development. Jason Stevens, director of bars, spirits, and beverage at Congress, says traditional mocktails were "often over-sweet, often made from gun soda and artificial syrup" – think Shirley Temples. Virgin versions of classic cocktails would lack necessary bite. A Bloody Mary without vodka is little more than V8.

Just as cocktail culture has shifted away from "saccharine vehicles to get buzzed," as Steven puts it, so too are they looking to add more sophisticated flavor profiles to mocktails. The bar master's palate is becoming as important as the chef's. "Now we're finding a wide range of flavor and culinary expression in cocktails, and people who can't or don't drink still want to experience this," Stevens says.

Non-alcoholic drinks can even be a replacement for wine (not to mention boring iced tea and soda). At El Naranjo, chef/owner Iliana de la Vega offers various aguas fresca (perhaps the original mocktail), including horchata and hibiscus-based tea agua de jamaica, giving diners plenty of options. "If you don't feel like having a drink, it goes great with your meal," she says. At Congress and sister restaurant Second Bar + Kitchen, there is a full zero-proof menu.

But what goes into making a good mocktail? A lot of the same skills and ingredients that make up traditional cocktails are still used, but the lack of hard liquor has to be accounted for. "By taking the proof out of the drink, you have to work a little harder to gain complexity and depth of flavor, but it's so doable," Sanders says. One way to accomplish this is through something like a drinking vinegar or shrub. While that might seem a little extreme, a strong flavor is necessary if one is trying to replace something as strong as gin or vodka.

Stevens has his own take on replacing the hard stuff. "I sometimes create house ingredients like charred barrel water or blackstrap tea to imitate a spirits flavor," he says. "Spices, teas, vinegars, jams, and more all come into play to build structure and increase flavor."

Sanders is a big fan of bitters, using it in small doses, much like a cook might use vanilla extract. While that wouldn't create a true alcohol-free drink, it can work for people looking to stay away from the effects of alcohol. It won't get you buzzed, but the flavor does the trick.

Like with any mixed drink, taking care of the basics is key. "You have to have a sense of what you want the drink to taste like in the finished product and use high quality ingredients in the right proportions," Sanders says. Ultimately, the end result has to be up to the standards of the other drinks being served at the bar, and that includes the way it looks. "A cocktail should be delicious," Stevens says. "They should be beautiful vehicles."

Stevens approaches this trend by delving deep into the past, exploring archives for neighborhood soda fountain recipes. It might be easy to dismiss soda shops as cultural relics where two teenagers would share a malt with two straws. But history isn't an Archie comic. Old techniques can reveal some interesting ways of creating modern drinks.

Flavor aside, the thing non-drinkers really want is the same "buzz" that their drinking compatriots get. It's what Stevens calls the "shared experience between you and the bartender." Sanders agrees that her patrons should feel that they are special regardless of the alcohol content of a drink.

"Hand someone a well-crafted non-alcoholic beverage with a bouquet of fresh mint, a beautiful lemon swath, and some fresh berries, and bam, now they feel like they're being pampered," says Sanders, "and that's what the job is all about at the end of the day."