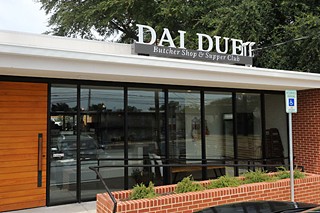 When you order a dish named "persimmons and tangerine" in 2014, it's a bit of a surprise to get just that. We would have hardly raised an eyebrow if the lunch side ($5) appeared shaved or squawked, but Dai Due gave no such displays of technique. Dai Due sent out the persimmons sliced vertically, skipping the flashy center starburst. The tangerines were roughly quartered, not meticulously supremed. 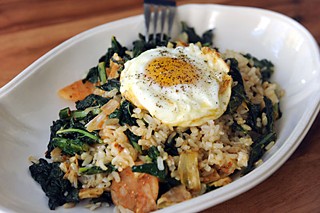 Chef Jesse Griffiths and his talented kitchen could have no doubt added flourish, but their ingredients never need to show off. True, this is Texas cooking, but it's not the kind that peacocks in Lucchese crocodile. These boots have been scuffed up on the farm, soaked through in the Gulf Coast. And they're now twirling around the floor in a dazzling two-step. Modernity and heritage. Quick quick slow slow.

Our first dance was with the day menu – a collection of comfort classics ranging somewhere between Alice Waters and Alice Doesn't Live Here Anymore. Pon Haus ($11), served with a drizzle of molasses, had less scrapple meatiness than its platonic ideal, but the heavier use of cornmeal allowed the fried egg yolk to ooze through every bite. Chicken and dumplings similarly avoided culinary mulishness. The broth is familiar, only thick enough to coat a spoon, speckled with turnip, carrot, and kale. Squarish biscuits sit on top, perhaps not dumplings per se, but just dense enough for sopping. The Dai Due Breakfast ($9), with its health food trio of brown rice, kale, and kimchi, was the only dish that might be out of place at a diner, but even that had a fried egg. It still felt as light as a salad. 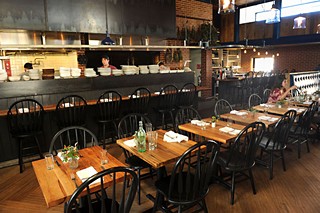 The interior is just as unassuming as the food. The butcher shop is cottagey with built-in display cases, beadboard, and wire baskets (a quartet of skulls keeps things from getting too Kennebunkport). The dining room is half-wrapped with brick and loosely rural – with winks to French provincial (dried bunches of herbs, liberal use of blue), English country (the Windsor chairs), and Amish (the quilt-like piecing of banquette upholstery) styles. All that shadow is saved from muddle by large windows and the blinding white of the other side. Occasionally, a carcass will whiz by from the freezer. 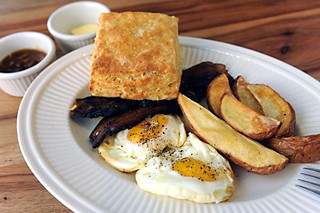 But back to those tangerines. A few days later at dinner, tangerine was sprinkled liberally throughout the menu. Even as a component in a pair of small plates, the fruit never lost its essentiality. The whipped lard's tangerine coaxed nuttiness out of a gently charred mesquite sourdough loaf ($6). In the Fallow venison ceviche ($12), it wheedled more blush out of the deep garnet meat.

That bright dish was a nice contrast to a pair of more assertive dishes. (The whole meal was expertly coursed by an almost prescient server.) The entrée pork confit ($21) was as crisp as a hash brown, its heft balanced with crisp Gala apples and a side of grilled Chinese broccoli ($6). The beef tartare ($12) had some of the traditional trappings (egg yolk and shallot), but pickled kale stems subbed for capers. The switch isn't gimmickry. Yes, it keeps the ingredients hyper-local (even the tea is Texan), but it also adds a less verbose brine.

The same is true of the collard green used in place of the cornhusk in the supper club menu's shrimp tamal (market price for prix fixe varies). The bitter green adds depth to the red cortido and crema, like parsley on borscht. Dai Due Fish Soup (the supper club entrée) is a more down-home version of bouillabaisse – and perhaps the dish that captures best the high-low mix. Humble vegetables are floating in that broth, but we challenge any kitchen in town to make a more regal aïoli.

One might expect such a sure savory hand to treat dessert as afterthought, but there was a subtle persimmon treacle in a basque cake with hickory (offered with supper club menu, $6 à la carte) – a tiny scoop of coffee ice cream reinforcing the richness of café de olla. At Dai Due, even something as small as after-dinner coffee is considered. (It's telling that the madeira and soda aperitif [$5] appeared on the food menu.) If there is a quibble, it's that it is too easy to bog a meal down with heaviness. Nevermind, we'll still be dancing in our chairs.