The former convenience store on Dry Creek just off RR 2222 has seen a long procession of restaurants over the past 30 years, mostly casual cafes offering counter service for burgers or barbecue. They all barely changed the food-mart atmosphere, and none of them lasted more than a few years, even with the addition of a bar and a patio. The newest tenant is the second local outlet of Azul Tequila, a popular South Austin Mexican restaurant with a nearly 15-year track record of success. Sergio Varela has created an actual restaurant in the space for a change, reshaping the interior to include an entry, a host stand, and a full bar with an impressive selection of tequilas and sotols. A banquette with two-and four-top tables runs the length of the dining room under the front windows, and the covered dining patio has ceiling fans and heaters. It's still on the casual side, but somehow more inviting.

The menu here is identical to the South Austin original, divided between traditional Texas Mexican dishes and choices that are more representative of the area in south central Mexico that is the ancestral home of Varela and his brothers Eric and Eduardo. The portions are generous with attractive, colorful plate presentations. Based on a few recent visits, the service team has yet to hit their stride and the sign out front announcing that servers are wanted could be the reason; the place feels understaffed with harried workers struggling to keep tables bussed and drinks refilled. That hiccup aside, the surrounding Northwest Hills neighborhood appears to be responding to the new restaurant with enthusiasm. We encountered plenty of working folks grabbing lunch, and families and couples enjoying dinner.

For lunch on an unseasonably chilly day, I went straight for cold-weather Mexican comfort food – a hearty bowl of pozole Mexiquense ($9), chunks of pork and toothsome hominy in a robust red chile broth and carne guisada ($9), tender beef tips in an earthy brown chile gravy paired with beans, rice, and homemade corn tortillas. The modest heat generated by the different chiles helped stave off the cold, as did the warm desserts – hot, puffy sopapillas ($4.99) drizzled with honey, and cinnamon-sugar dusted churros, fresh from the fryer with chocolate sauce for dipping. It was a simple, satisfying, well-executed meal. 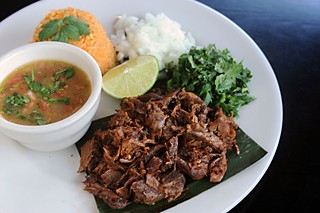 On the second visit, our group of five showed up on a Sunday evening to find the dining room and patio busy with families and groups. We chose appetizer bargains from the happy hour menu and three folks sampled the house jumbo margaritas ($8), frosty goblets of a concoction they said notably tasted of tequila and were perhaps sweetened with pineapple juice. The ceviche ($6) arrived in a fluted sundae glass filled with firm pieces of tilapia and tiny plump shrimp in a lime marinade that needed the balance of a shot of salt. We found the queso flameado ($4), melted Mexican cheese topped with house-made chorizo that can be wrapped in fresh, warm tortillas, to be far superior to the bland chile con queso ($4) which needed a good dose of the fiery table salsa to give it any life at all. The sopes ($4) were the real star of the show in the appetizer round – thick masa boats filled with beans and spicy shredded chicken tinga, complemented by crisp lettuce, crunchy radish slices, and a smoldering avocado salsa verde.

Moving on to entrées, we found dishes featuring beef, chicken, pork, fish, and goat. There are vegetarian options, but our carnivorous group passed them by. The pescado zapoteco ($19) offers a sautéed tilapia fillet with an aromatic dry chile and garlic spice rub, crowned with several medium-sized shrimp. The fish was moist and flaky under its rust-colored crust and came paired with a sliced avocado salad, and a bowl of white rice and black beans.

The richest dish on the table by far was the chile relleno en crema ($12), a roasted poblano pepper stuffed with an almond and raisin-studded pork picadillo, napped with a voluptuous tomato cream sauce. I chose the cabrito al maguey ($13), a goat barbecue dish from south central Mexico that's somewhat of a rarity on Austin restaurant menus. Presented on a maguey leaf, the goat meat was tender, if a little dry, and neither the earthy flavor of a chile guajillo marinade nor the salsa verde mentioned on the menu made an appearance. It didn't really live up to my expectations. Enchiladas Salado ($9) offered up a non-greasy rendition of classic Tex-Mex cheese enchiladas topped with chile con carne, and the mole poblano enchiladas with chicken ($10) made a convert of my guest who had always been wary of sampling Puebla's dark, complex signature sauce.

As proprietors of the Papalote Taco shop and an already successful Azul Tequila, it's obvious the Varela brothers know their business. I'm betting their second outlet could just be the neighborhood keeper that blots out the memory of a converted convenience store, especially once they have enough trained service people working the floor.