Culture and craft at Texas Keeper

Gone are the days of the Hicks' Texas Keeper. Last seen in an 1885 catalog of a Paris, Texas, nursery, the Lamar County apple – medium-sized and green with red stripes – was referred to as a "keeper" because it stored well and improved with age. Now simply called a lost apple, the fruit evokes a certain nostalgia. It's no accident that a cidery devoted to heritage shares its name.

The new Texas Keeper harkens back to the days before prohibition and the later implementation of esoteric alcohol laws, producing traditional ciders with heirloom, cider-specific varietals. The unfiltered result, made with 100% juiced apples, sips with nuance – perfectly dry and perfectly balanced.

Started by Austinites and longtime friends Brandon Wilde, Lindsey Peebles, and Nick Doughty, the trio behind Texas Keeper Cider has found quick success. Though they didn't officially start selling until the end of August, Texas Keeper ciders are already available at more than 24 locations throughout Austin. "We just started by going to our favorite local places," says Peebles. This included stops at Lenoir, In.gredients, East End Wines, Antonelli's Cheese Shop (ask them for pairing ideas), and Wheatsville Co-op, with plans for Whole Foods in the coming weeks. According to Wilde, an absolutely essential part of their operation is their participation in tastings. "We want people to know us and where we're coming from and the ethos behind our product." 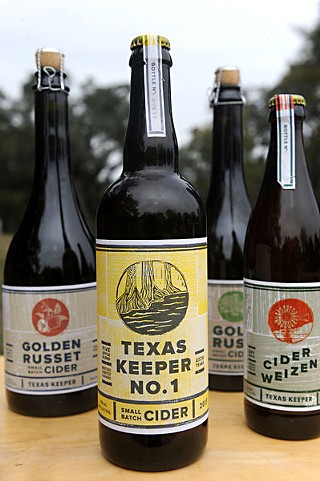 Born to an English father, Doughty grew up going to cideries. After finishing his master's at the University of Texas in public policy, he attended Lincoln wine school in New Zealand. Peebles accompanied Doughty on his journey finishing up law school on the island and working in orchards along the way. During the couple's time there, they begin to experiment with cidermaking. "We only had one chance to make wine, but we were able to play around making ciders and play with fermentation. That was the genesis of Texas Keeper," says Doughty. The pair then connected with friend and avid homebrewer Wilde, and Texas Keeper came to life.

After thousands of phone calls and trips searching for the right supplier, the trio decided to go with a small grower in upstate New York. "Our focus is to use heirloom and cider-specific fruit. Like wine, you really need great fruit, specific varieties of apples, to make good ciders. Once you get good fruit, then you can really work on presenting that fruit," says Doughty. While extremely happy with their current arrangement, the trio is also excited to work for growers closer to home. "We've been talking to some orchardists up in the [Texas] Panhandle who are planting cider varieties now, so it will just take a few years for them to come online," says Doughty.

Their first release, Texas Keeper No. 1, blends five apples, each fermented individually and then blended to create a crisp yet delicate cider. Gold Rush is the cidery's first single varietal release, using 100% Gold Rush apples. Though Texas Keeper's focus is traditional, they do experiment with style, recently brewing a "ciderweizen." "It's a hopped cider, but it's more than that," says Wilde. "It embodies the style of a hefeweizen. It's dry-hopped and dry-spiced, and it's about bringing out those flavors and then marrying it to the fruit of cider.

"Cider is made from fruit, but finished like a beer. It takes the best parts of both of them – that's what's great about it. The beauty of the market is that people are excited about it and experimenting with what they're buying. They are taking a chance on things that didn't exist before. You can be traditional and creative."

With no plans to slow down, a tasting room is now in the works and should open within six months to a year. Located on a 20-acre ranch in South Austin canopied by oak, pecan, and cypress trees and neighbored by Live Oak cemetery, the cidery lends itself to inspiration. "It's a scenic, beautiful piece of land," says Wilde. "We want people to experience it."

Dear Glutton: Food for Doomsday
How to weather the storm