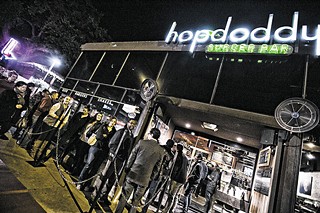 It's Wednesday night and your family is going out for a casual dinner. At the restaurant, you find yourself waiting in line to order food from the kid at the counter. The line snakes around the crowded dining room, bumping up against other diners who are already seated and eating. There's a clumsy moment when your butt nudges up against someone's shoulder. You say excuse me in your most contrite manner; the guy who just got a face full of your backside gives an exasperated look.

Five minutes later you get to the front of the line, which is now twice as long as when you came in. It's like speed dating over the cash register. You rattle off what you want ... appetizers, dinner, drinks ... oh wait. Your daughter hasn't decided yet. Quickly you enter into negotiations with her over the pasta or the pizza, checking the line behind you to gauge the frustrated mood. Finally she decides: It's the pasta. "Now how about dessert?" the kid at the counter asks. Dessert? You hadn't even thought about dessert, but you do a quick mental calculation and realize that if you don't order it now, you'll have to brave that line again. Still, you can't decide. Forget dessert. You pay and then wade through the crowd to find a table. You hover over a table that is just finishing up, then pounce on the still-warm seats. With sweat still beading on your forehead, now finally, you begin to relax.

It's a stressful scene, and it is becoming all too common in Austin. Counter service is taking over the dining experience. Everywhere we go, we wait in lines to order food, then struggle to find a table. Some establishments even expect us to bus. We all expect counter service when we go to fast food chains or taquerias. But increasingly, local restaurants who serve chef-driven cuisine are opting for a DIY experience. What does it mean when an upscale restaurant makes people help themselves for a meal? Are Austinites so casual that we no longer want tableside service?

For many people, counter service signifies informality and convenience. Ameri­cans dine out more than ever. Statistics vary depending on the source, but most people average two to five meals eaten outside the home per week. Those who eat out often cite the fact that they are just too busy to cook; they want food that doesn't require a major time investment. But Austinites are also increasingly more picky about food, no longer completely satisfied with fast food chains. We want good food when we dine out; even if we want it at a fast food pace. 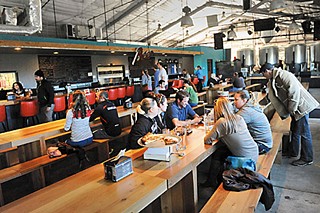 Call it the food truck effect. It's when a restaurant's emphasis is on food at the expense of service or atmosphere. The food truck effect frequently occurs when chefs become restaurant owners and haven't a clue about how to run the front of the house. Rob Snow made the decision to go counter service when he opened Greenhouse Craft Food in Round Rock for just this reason. His experience was from the back of the house, not the front. He chose counter service because it meant hiring and managing fewer staff. Greenhouse operates with about half the staff of a traditional sit-down place. Lacking experience with management and training, it seemed easier to oversee a few people at the counter rather than to train a battalion of servers. Paul Qui's East Side King group of restaurants has followed the same pattern. Although Qui certainly had the name recognition, experience, and the cash to turn his popular Asian-fusion food truck into a regular sit-down establishment, he stuck with the counter service format for his first brick-and-mortar space – basically a food truck with a roof.

"People don't always want to feel tied to a restaurant that does tableside service. They don't want to feel trapped after their meal," explains Brandon Martinez of Noble Sandwich Company. Martinez and his partner John Bates originally chose counter service for their popular Cedar Park deli because they simply could not hire any more people. When it first opened, Martinez and Bates did everything themselves, from cooking and washing to taking orders and bussing. Fast forward five years and the restaurant is successful enough for another outlet in Central Austin. This time, cost and know-how were not issues, but they stuck with the counter. They did not want to lose the casual in-and-out sandwich shop atmosphere.

Yet with line waits that can top 45 minutes at some counter service restaurants, one wonders how much time patrons are really saving. Hopdoddy Burger Bar is a perfect example. At both Austin locations, clientele wait in seemingly endless lines to order and then be seated. Although owner Larry Foles has acknowledged that they do try to manage the line experience – by taking drink orders while people wait, for instance – it still doesn't mitigate the fact that a burger at Hopdoddy can take even longer than a meal at a restaurant with traditional service, with most of that time spent standing in line, waiting. Not exactly convenient.

"When I want an inexpensive, fast meal, I do like a place where I can order at the counter and then leave as soon as I am finished eating," says Jill Madden, a business owner and self-described foodie. But when she goes out for a nice dinner with friends or family, Madden expects to be waited on. Many diners I talked to echoed those sentiments. They don't mind waiting in line and ordering at the counter at casual restaurants or when they need to eat quickly. But are counter service restaurants really matching people's expectations when they have lines out the door? Restaurants like the ABGB and Pinthouse Pizza, both restaurants serving pizzas and microbrewed beer from a counter, believe they are. But that may not be the case for all restaurants that follow the same service model.

Snow concedes that at Greenhouse, it's hard to get people to order appetizers, dessert, or to have a second drink from the bar. Then there are poor tips, which are universally lower. Without incentive, attracting service professionals can be tough.

At Snow's second restaurant, the Scarlet Rabbit, servers now take seated orders. They are not the only ones to make the switch. The upscale deli and wine bar Henri's recently reassessed their counter service model and decided to go tableside. According to co-owner Andy Means, the decision happened when he realized that he himself preferred traditional service, especially when having a meal with wine. Meanwhile, he also began to get pressure from his regulars who hated to fight the line, then to fight for a table, and then do it all over again if they wanted something more. "It simply wasn't relaxing," says Means, "and it wasn't the way Henri's customers wanted to dine."

Many restaurant owners continue to feel differently; and whether its lack of resources, or just the democratization of cuisine, diners can expect the counter service model to endure. This is good news for those who like serving themselves; the rest can just fall in line.