Sawyer & Co. rings out the old

It's a risk to build a business on nostalgia. Cultural atavism, over time, can simply look dated. Even in a town that fetishizes anything vintage, one can't count on that novelty alone. A pet rock can skip, but they more often sink.

So I entered Sawyer & Co. with some trepidation. Midcentury down to the very last detail (the pickup truck in front seems to be permanently parked), Stephen Shallcross' rework of Arkie's Grill could have drowned in the theme park version of history that assumes all American eateries were designed by a Coca-Cola ad rep. Instead, Mickie Spencer's thoughtful take borrows from the wood-paneled monumentality of banks and the high-contrast formality of Hollywood Regency hotels. There is a surplus of style – refurbished, salvaged, and faked. The overscale Calder-esque wallpaper is painted, the back wall clock's hours are marked with stock ceiling fixtures, and those poppy white tabletop displayettes are from Ikea. The ahistorical shenanigans keep things interesting, so the retro style never overwhelms substance.

Still, it's obvious that Shallcross' particular madeleine was nibbled somewhere between the Eisenhower and Johnson administrations – and that's an awkward culinary era. Shake 'N Bake debuted in the grocery, while Julia Child helped thousands to master the art of French cooking. Sawyer's New Orleans-inspired comfort food is closer to the former than the latter, but that's not meant as a pan. There's a home-cooked honesty in the menu (developed with Shallcross' longtime friend Happy Abdelbaki), with recipes rooted in tradition. There's plenty to like, but one should not expect much innovation.

In that spirit, we started with a pair of mainstays – boudin ($3.99) and cheese fries ($5.99). The boudin was given a little snap (Pearl Snap to be exact) by the beer mustard, but the fries seemed deflated. As advertised, they were a down-home version of poutine. As served, they were a globby mess. The jalapeños and brown gravy were both cowering if not altogether absent.

Never mind, the muffaletta ($4.99 for a quarter) was as successful as anything from Decatur Street. The bread was perfectly toasted, the olive salad adding the right amount of zing. The shrimp seafood salad ($10.99), lightly dressed in remoulade, made a nice accompaniment. The crawfish étouffée ($9.99) likewise did the job, luxuriating in its murk. The small scoop of rice was a bit dry, but a good sauce can mask a multitude of sins. The only real disappointment was the Creole catfish ($8.99). It was by no means bad, but it did suffer from a host of almosts. The sauce almost had brio, the side of maque choux almost had depth. Both needed a more liberal use of spice.

The dinner, however, pales to brunch. Like a lot of diners, Sawyer truly excels in the early hours, and the patio is the preferred setting. The reclaimed turquoise banquettes, oversized globe fixtures, and AstroTurf are full of populuxe charm. Add afternoon sunshine and the anachronistic friendliness of the service, and you are in Morris Lapidus' Miami.

The pastiche continues on to the plate. Sawyer's Breaux Bridge Benedict ($8.99) follows the same basic template as Scott Boswell's famed version at Stanley, only throwing out the first layer of French bread. It's not needed; the boudin patty forms an affable base to the hollandaise and yolk. The pork grillades ($8.99), are grillades in spirit if not form. The exuberantly rouxed meat (served over creamy grits) was so tender, it could hardly maintain any shape at all.

The smaller dishes likewise hedged on the side of familiarity. There's not much sense in finagling with grilled oysters ($10.99 for a half-dozen) and its one-two punch of Parmesan bread crumbs and butter. Deviled eggs ($3.99 for four) added the frisson of praline bacon to the quintessential filling, but otherwise wouldn't startle a time-traveler. That daytripper might have even brought the Sensation Salad ($4.99 for an ample side) with her; it only adds green olives to the Bob and Jake's ideal.

Relative to the kitchen's classical approach, the cocktail program can surprise in its daring. Carley Dunavant's drinks hit all the mixology sweet spots, but always with a personal stamp. The draft Pimm's Cup ($7.50), for example, has a touch of basil. The Lafayette Fix ($6.50), made with atypical vodka, adds mole; while the Hurricane ($6.50) adds tea. The brandy milkshake ($9.50) makes as good a dessert as anything else on the menu.

Sawyer would be wise to take some cues. Its Cajun cooking doesn't need reinventing, but we hope to see a few contemporary riffs on all that jazz as Sawyer matures. Based on the virtuosity of his dinner club cuisine, Shallcross certainly has it in him. Until then, he's built one heck of a good foundation. 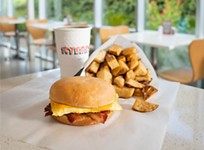