Players and the UT expansion machine 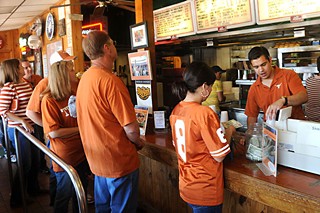 On the day that the Dog & Duck Pub announced its imminent closure to make way for a parking garage, a grad school friend commented on Facebook that "it's like Austin is actively working to take all my reliable favorites away." Other folks wondered what beloved campus-area hangout was next on the chopping block – the Crown & Anchor? ("From your lips to the developers' ears," read one rueful comment.)

Generations' worth of UT students had similar reactions when it was announced that Players was closing for good on November 23. After more than 30 years serving greasy burgers and frosty goblets of mid-range beers to Longhorns, the iconic restaurant will finally succumb to the university's long campaign to colonize the southwest corner of the outer campus.

While the nondescript building's green shingle roof and sad sign that reads, "Open [black square] hours" suggests disrepair, the shabbiness of the building indicates the kind of no-bullshit place Players is. Opened in 1981 by freshly minted UT graduates Carlos Oliveira and Edward Hempe, Players has done the same thing for the past 33 years: burgers, fries, shakes, beer.

It's where UT staff can eat lunch on the cheap, or students can hang out at 2am after a long night of studying (or drinking), and the sticky patina on the tables bears witness to their long years of use. It's also one of the last few places where students can gather near campus that isn't a church or a chain. The food at Players isn't going to win any awards, but its closure situates what is otherwise a humble burger joint at the tense intersection of modernization, Austin's changing food culture, and UT's seemingly unquenchable thirst for land.

Walking into Players in 2014 is no different from walking into Players in 1990, except maybe for the presence of Coke Zero in the self-serve soda fountain. There is still a large TV blaring sports, UT memorabilia, and an ancient menu board detailing the house specialties. It's the one constant – relatively speaking – in a city whose commitment to progress is made manifest in sparkling condominium towers and restaurant spaces commonly described as "sleek."

Kathryn Hutchison, a local food blogger who wrote a paean to Players on her blog, austingastronomist.com, argues that UT's takeover of that corner raises serious questions of accessibility.

"I'm not a churchgoer, so this is the secular gathering place that I came to every week with my friends," she says over a basket of fried mushrooms. "We bonded and shared experiences in a non-collegiate way. Increasingly there are fewer and fewer gathering spaces that benefit students around campus."

In addition to serving as an everyday site for group lunches or late-night snacks, Players also serves an important cultural function for longstanding student groups. I have vivid memories from my freshman year at UT of attending University Democrats meetings, then walking en masse to Players for an informal coda to the business we'd just conducted. The tradition still stands today; UDems will hold its final Players happy hour the day after this article goes to print, wrapping up a tradition spanning at least a quarter of a century.

"UDems has always had a good relationship with the owners and the people who work here," says Katie Adams, a UT senior and communications director for the University Democrats. "There's something to be said for being able to interact with candidates on a professional level at meetings, but then transition to a more informal environment. It's really important for student leaders to be able to interact with their representation on that level.

"When you lose places like Players," continues Adams, "you're losing local color. UT needs to grow. But it's unfortunate that growth creates a less positive experience for the student body. If they do have to use this space to grow the university, it needs to contribute toward quality of life for students in some way."

Hutchison, who graduated from UT in 2008, is similarly conflicted. "'Growth is good' is the knee-jerk reaction," she says. "But when you look more deeply it's like, 'What are we displacing? What student opportunities are being lost?' That's when it gets uncomfortable for me."

Players has been on UT's expansion radar for more than a third of its lifetime. Back in 2004, UT's Board of Regents authorized the use of eminent domain to force a sale of the property in order to build a parking structure for the AT&T Conference Center, which was still just a blueprint. This prompted a "Save Players" movement with a 4,000-signature petition.

Still, the inevitable finally came to pass in 2012 when the university ponied up $2.5 million to purchase the corner, while the McCombs School of Business Foundation covered another $1.5 million; Oliveira and Hempe received $3 million cash, while the remaining $1 million covered a rent-free lease for the restaurant, which UT could terminate at any time with six months' notice. Because the university paid fair market value for the property without exercising its use of eminent domain, it is free to do what it likes with that space.

While eminent domain is defined as the taking of private property for public use, a maneuver like this one felt even more insidious, despite the payout. What is the cultural value or public use of a university-operated parking garage versus a generational gathering place? Which establishment is a greater benefit to the community? What does UT owe to the Austin community, if anything, in terms of how it acquires and develops property?

Andrew Busch, a UT alumnus who currently serves as visiting assistant professor of American Studies at Miami University in Ohio, wrote his Ph.D. dissertation – soon to be published as City in a Garden: Race, Progressivism, and the Environment in Building Modern Austin, Texas – on the histories and ideologies that shaped urban development in Austin throughout the 20th century.

"UT was at the forefront of urban renewal in the 1960s, which is when eminent domain became prominent nationally as a way to clear and rebuild 'blighted' property on the feds' dime," he writes via email. "The university was looking for a way to expand the campus (obviously locked in on all sides) as enrollment was skyrocketing and they were attempting to get in on the federal research dollars so prominent at the time."

He continues: "They dispossessed and displaced hundreds of residences and businesses and had no plan for relocating them. The vast majority were black. UT's use of eminent domain has radically altered the physical and social landscape in [Central and East Austin]."

Of course, UT's not the only player in the Austin development game. Many at UT are still cranky about the demise of Les Amis. The food was so-so and the service was marginal, but you couldn't have conjured up a more vibrant community gathering place. That spot is now occupied by a cluster of chains, save for the locally owned Fricano's Deli.

The Drag is similarly transformed; what was once a grubby assortment of independently owned bookstores, gift shops, and Captain Quackenbush's has now been colonized by the University Co-op, which charges premium rent to national chains. On campus, students can grab food from Wendy's, Tacos Cabana and Bell, and Chick-fil-A. While there are a few eateries nearby, they lack the cultural memory of places like Players, Texas Chili Parlor, and the Dog and Duck.

"The 21st century equivalent to Players is Hopdoddy," says Hutchison. "It's been developed, the line and the format are like an amusement park. You're in and out, it's very transactional." What's more, a burger at the growing chain costs twice what it does at Players, not factoring for the value of time spent in the interminable line. There's no time to linger over your meal because you burned through it all waiting.

The problem goes deeper than that, though. Franklin Barbecue, fetishized for its line and its brisket, is a gentrified palimpsest of black-owned barbecue restaurants where you could get mutton alongside your beef and ribs in an area gradually divested of its black residents. It's not just UT – all development is complicit in the radical transformation of Austin's landscape and culture.

In short, urban renewal – in this case, via UT's continued efforts to expand its campus – has deep and broad implications for a city's cultural landscape. Just as the constant churn and swell of growth spelled the demise of the quintessential midcentury Nighthawk steakhouse, so does Players become a footnote in the ever-expanding archive of local businesses that don't survive a city's evolution. While it will still be possible to grab a Players burger at a handful of local municipal golf courses, the commensal experience of gathering around those sticky tables can never be replicated.

The University of Texas' motto is "What Starts Here Changes the World." The regrettable consequence is that what ends here changes the future of Austin food. 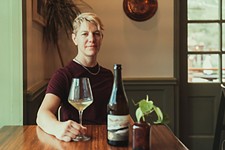 Ladies’ Night: Women-Owned Wines for Valentine’s Day
Toast your bae any Valen-time with these Austin-based brands