There's Brisket in That Cider

How Austin Eastciders put a Texas twist on apple hooch 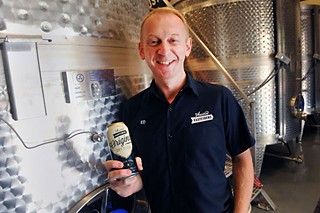 If you grew up in the heart of the UK's cider country, you might've heard horror stories about dead rats thrown into the cider vats. In Texas we don't have many rats, but we do have cows. So if some maniac is going to be throwing meat into cider, it should probably be brisket.

To celebrate Austin Beer Week, Austin Eastciders have crafted a special cider to be released on Halloween night that's been fermented with Micklethwait Craft Meats burnt ends, but their Texas connections don't stop there. Before prohibition, cider was the most popular alcoholic spirit in the Americas, and it was common for Austinites to produce their own. A catalog from a Hyde Park nursery dating to 1895 advertised Winesap apple trees as highly prized for cider-making. Eastciders is now using the very same Winesaps in a small-batch, single variety cider.

Although the taste might've been familiar to those patronizing Barton Springs in the 19th century, Eastciders Winesap is unique in today's cider landscape because most ciders are blends. Unlike wine, it's rare to find an apple variety with the right balance of flavor. At first Eastciders wasn't sure that Winesap fit the bill, but after nine months of aging, the eggy aroma was subdued by a pleasantly funky fermentation that brought out flavors of citrus, sugary bubblegum, and salt.

"It's like the margarita of ciders," says Eastciders founder Ed Gibson. "It has this slightly savory taste which I've never had in a cider before."

Finding a cider that can surprise Gibson is no small task. In 2006, the UK expat put his career as a music talent buyer on hold to found a cider bar in Bristol called the Apple. Built into a floating barge that formerly housed an S&M club, the Apple offered 40 varieties of bottled cider and seven rotating taps. They sourced much of their cider from local farms that had been following the same recipes since the 1600s.

Despite this rich cider history, the drink hasn't always been trendy in England. Until the early Aughties, cider was mostly associated with street drinkers because of the low cost and high alcohol content. But thanks to a perfect storm of trends that included a cider trailer at the Glastonbury Festival, the country's first organic cidermaker, and the popularity of the drink among ravers, cider was suddenly in fashion. Gibson saw the trend coming and jumped to fill the niche.

"You could go to a bar and try 100 Belgian beers, but not 10 ciders, even though the whole area was surrounded by cider farms. People didn't know about them, because the farms didn't have distribution networks," says Gibson.

After a few successful years running the bar, Gibson grew tired of England and was looking for a change. A friend recommended Austin, Gibson came for a short visit, then he packed his bags and moved to Texas to start a cider company.

If only it was that easy. 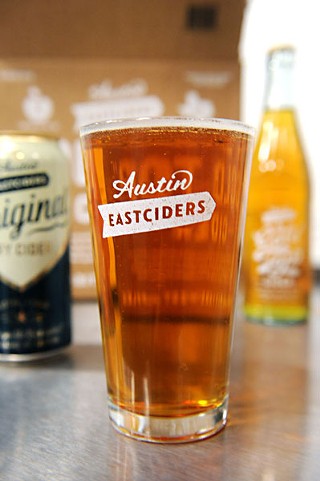 Fans of the cider can tell you that despite launching in 2011, Eastciders hasn't been fully available for three years. Gibson bootstrapped the first batches of Gold Top as proof of concept and landed it in bars like the Longbranch Inn and Cheer Up Charlie's, but the drink proved to be too popular for its own good, and soon the supply ran dry. Lacking the necessary funding and a proper production site, the stock of Eastciders would ebb and flow until the company secured temporary production at a winery just north of Austin.

The production problems are now a thing of the past. With 48 tap handles across town, Eastciders recently claimed the title of most popular cider in Austin. It's hard to miss, thanks to a striking logo by typographer Simon Walker that invokes pre-Prohibition imagery, but even without the Design Sponge-worthy bottles, the flavors speak for themselves. Currently two versions are available commercially: the dry, crisp Eastciders Original that's made with Wash­ington dessert and French bittersweet apples, and the 100% bittersweet Gold Top that has a powerfully divisive flavor.

"You either absolutely love it or hate it, but you can't please everyone," says Gibson.

Until now, they haven't had the capacity to produce more than the two varieties, but the opening of a dedicated production facility in East Austin will change that. Lease negotiations lasted over two years, but they've finally moved into a Springdale Road warehouse across the street from the Canopy offices. They're the first tenants in a compound that will eventually include a distillery, brewery, rock climbing gym, and theatre.

The facility has a bit of hand-me-down charm thanks to a vintage bottling line, but otherwise it's all high-tech. The stainless steel wine tanks are imported from Italy and the state-of-the-art carbonator bubbles beverages at temperatures previously thought to be impossible. "It's like the holy grail of carbonation. It enables us to carbonate cider without it being quite so chilled, and with the Texas heat, that's really important," says Gibson.

Also crucial to a beverage maker in Austin is the ability to invite customers into their home for a drink, and soon Eastciders will be able to complement their cidery tours with a selection of limited edition batches poured from their neighboring taproom. The space's strange history matches the company's throwback tendencies. The building was actually a functioning railroad station shipped to Texas from Kansas by a wealthy train enthusiast. Now instead of selling tickets, the station will be tapping cider from a debut lineup including Eastciders Original and Gold Top, as well as new offerings like Oaked, Hopped, Texas Honey, and that mythical brisket cider.

For the past month, 10 pounds of Micklethwait burnt ends have been floating in cheesecloth inside tanks of French bittersweet apple concentrate. Instead of feeding on a diet of conventional yeast nutrients twice a day, the apple juice has been devouring the brisket at an alarming rate and began fermenting much quicker than usual. By the end of the process, they hope that some of the caramel and vanilla notes from the smoking process will linger alongside the beefy, black pepper flavor. If you don't think that could possibly taste good, you're not alone.

"I've been shocked, because originally I thought it was going to be more of a novelty thing," says Gibson. "But we all tried it two days into fermentation, and we realized this might be something that we could actually sell!"

Strangely enough, this Texas twist on cider actually has a historical precedent. Those tall tales of throwing rats into tanks are rooted in the practice of using beef as a substitute for yeast during the fermentation process, so Eastciders aren't the first to realize that cider has a taste for barbecue.

"We wanted to do something experimental, but also keep things traditional. I don't think anyone in this country has put meat in cider in 100 years, and it's probably been 50 in England," says Gibson.

The brisket cider is still patiently fermenting, so only time will tell if it tastes more like a pepper-crusted sugar cookie or a dirty pile of ash. Then once the limited edition cider is tapped, it will either become the stuff of legend – or of nightmare. 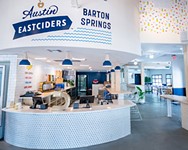 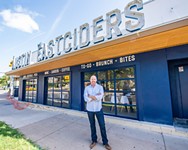