How a home remedy started a flame war 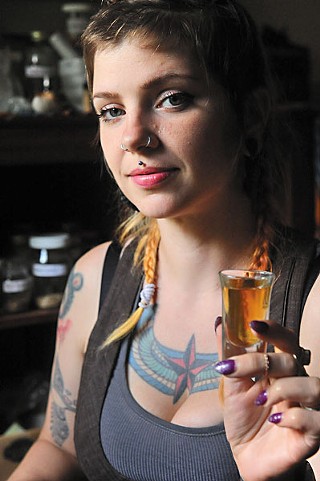 Some feuds are larger than the sum of their parts: Capulets vs. Montagues, Hatfields vs. McCoys, Tupac vs. Biggie, herbalists vs. Shire City. If the last example seems out of place, know that food fights tend to be the most passionate. The alternative medicine community may have a reputation for peace and love, but it turns out that apple cider vinegar can fuel a mighty big fire.

When the U.S. Patent and Trademark Office granted Shire City Herbals a trademark on the name "fire cider," all hell broke loose in the close-knit herbal medicine community. Many herbalists could not imagine calling their vibrant tonics anything else. And, at least commercially, they were being forced to.

Part of the sting was that fire cider is a staple of many herbalists' arsenals. "It's pretty much a salad dressing that's, like, the best thing in the world for you," says local herbalist Jen Easter. The basic recipe includes ginger, garlic, hot peppers, and horseradish – steeped in apple cider vinegar for around two months and shaken every day. It is then strained and often honey is added to balance flavor. Additions include foraged dandelions, vitex (common in Central East Austin), and chickweed. "People call them invasive weeds, but it's actually just medicine growing right around them," says Easter. In her fire cider, she uses astragalus, and says others use chaga. Robin Heart Shepperd, local chiropractor and home herbalist, adds onion, rosemary, and turmeric. The end result is a spicy, sweet, and decidedly bold flavor that may be consumed alone, or added to anything from cocktails to soups.

But taste is far from the only concern. "Pharmaceuticals mimic plants, and plants are way better for you," says Easter. "I think a lot of people try to put a Band-Aid on a symptom, but they're not getting to the root of the reason." Using fire cider is an example of how a shift from pharmaceutical medicine to food-based remedies may have lasting benefits. "It is a powerful immune-boosting, anti-inflammatory, anti-bacterial, anti-viral decongestant and circulation stimulant," says Shepperd.

At least on matters of health, both sides of the controversy agree. "Kombucha is like beer, and fire cider is like whiskey," said Amy Huebner, co-owner of Shire City Herb­als. "Fire cider is a gateway to using food as medicine because everything in it is recognizable as food. ... It's been around for centuries, and we're trying to revive this old tonic that most people don't really know about. ... We're on a mission to get people to recognize that whole, raw, organic foods are the most powerful thing that you can do for your health, and you have an opportunity to do it three to five times a day."

Unfortunately, the mission to take fire cider to the masses is precisely what sparked the outrage. Enter the Internet. A late January 2014 post on Shire City's website explained "Why And How We Trade­mark­ed Fire Cider." Co-owner Dana St. Pierre wrote that his German grandmother fed the kids a combination of honey with chopped onion and garlic as medicine, along with fresh, grated horseradish. Amy Huebner adds that at some point, an older country doctor suggested adding apple cider vinegar, and that over the next several years, particularly while studying at the Southwest Institute of Healing Arts in Arizona, St. Pierre tinkered with his recipe, adding "roots and fruits and things." They both say he chose to call it fire cider because a roommate suggested the name.

The Huebners continued consuming the mixture, until deciding to start handing out samples in 2010. Amy said, "Between all of us [including the third business partner, Amy's brother Brian], it's gotta be close to like a million samples that we've handed out – in biodegradable compostable cups." They began selling in stores in 2011, and received their trademark in late 2013. Amy notes that anyone can contest a trademark during a standard waiting period, but "no one did." Much of the uproar stems from Shire City Herbals' trademark claim that this concoction was their original design, despite many considering it an open-source folk remedy. World-renowned herbalist Rosemary Gladstar, in an open letter published on the Free Fire Cider website, argued, "Fire Cider was first concocted in the kitchen at the California School of Herbal Studies in the early 1980s." Gladstar has since used the term in copyrighted books. The idea, she has explained, is that the concept of food as medicine should be freely shared and taught. She personally taught "hundreds of people" the recipe, and it has been widely distributed through how-to videos and classes.

The tonic is now made by thousands and has become a small source of income for some entrepreneurs. But when Shire City Herbals received the trademark, they began issuing "cease sales" on Etsy, requesting immediate label and marketing changes. They even went after the "Free Fire Cider" Facebook page – since renamed "Tradition Not Trademark" – a phrase that has become something of a battle cry. Change.org has a petition against the trademark that currently has almost 9,000 signatures, and an organized boycott appears to be gaining traction, at least in sentiment. Both Shire City Herbals and a local bottling of the tonic currently sit side-by-side at Wheatsville Co-op.

The Huebners maintain that their trademark was granted because the trademark lawyers and the federal office were unable to find anyone using the name fire cider and selling it commercially. Amy Huebner also says that the trademark protection enabled her to promote fire cider – theirs, specifically – on the Dr. Oz Show "without the risk of Kraft Foods saying, 'Hey there's a market for that,' steal that name, and basically squash us. Take over all the grassroots marketing that we've done. Put us out of business, basically." She contends that, "If we'd gone out and done all this advocating and telling people, 'Hey, try our 'Shire Tonic' [a common suggestion from opponents] or whatever – something totally different – then all of these hundreds of thousands of people who'd never heard of this before would look it up online and find us and that's it ... I feel like using this name – that we've discovered a lot of people are very attached to – goes back to just continuing this centuries-old tonic that people have been using forever, that had so many different names and different recipes. We're just, kind of, part of that history."

The Facebook backlash, especially from the "herbalist healing community," shocked her. Huebner says commenters wished them cancer and homelessness and worse. "I didn't even know anything about any of these people until they started trying to destroy our business on Facebook. It was crazy. You know, I got why people were upset, but it was like they were upset that I didn't know these unwritten, unspoken rules that are part of their community. How would I know? How was I supposed to know?"

Regarding the trademark, Shepperd says, "It irritates the shit out of me." Easter, an Etsy seller, was asked by Brian Huebner to remove the "descriptive tag 'Fire Cider.'" The two exchanged six emails, resulting in Easter separating her hashtags, instead listing "fire" and "cider." She says, "They're trademarking something even though that's what everyone already calls it. So they'll lose the trademark because people aren't going to stop calling it fire cider. Even if they bully everyone."

When asked about the Etsy war specifically, Amy Huebner explained that the issue is that it is "the biggest craft fair in the world. Anybody with the Internet can use it. So even though you're a small producer, Etsy is a national commercial marketplace. Our compromise was ... we're not gonna put our stuff on Etsy as long as you're willing to work with us." She also mentioned that they offered to help pay for some of the relabeling.

And while their opponents continue to try a revocation of the trademark, Shire City Herbals continues to gain followers. Their product is now available in over 400 retail stores. And it hasn't exactly hurt independent Etsy sales either. "Ultimately, I've gotten customers [from this]. Maybe [the controversy] brought me business. I feel like that's what it could do," says Easter. Shepperd said, "Frankly, I doubt seriously that Shire City's arrogant trademark use of the term will affect those of us who brew at home, but I feel sorry for others who are doing communities a favor by bottling it for sale. It's really an ordeal to make, as the horseradish burns the stuffing out of your eyes when you grate it."

"It's sad because I really feel like they [SCH and the herbalist community] really do complement each other," explains Huebner. "We feel like this is our way to contribute to this movement of getting back to Mother Earth and doing things that are good for everybody and not just one person making money."