Mead in the Heart of Texas

Meridian Hive produces one honey of a drink 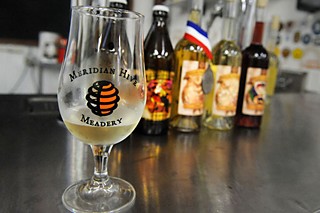 Listen: It pairs well with food other than just turkey legs, OK?

The once and future beverage called mead, the ubiquitous tipple of medieval times and the liquid mainstay of many a contemporary Renaissance fair, is coming back to claim its rightful throne in modern brewing. It's coming back across the nation, across the state of Texas (with nine professional meaderies), and now it's got a triumvirate of champions right here in the ATX: Eric Lowe, Mike Simmons, and Evan Whitehead. These are the men in charge of Meridian Hive Meadery, a pristine facility located near where 183 and 290 do their multileveled concrete do-si-do and the air hums with motive urgency. They're sitting at a long table among their array of gleaming steel-clad fermentation tanks, these three men – and one other.

"I'm the manager," says Lowe, setting out bottles of the meadery's newest brews, "Mike's the meadmaker, and Evan's master of everything else. And Jess [Dale] is our first sales guy."

(You probably already know that mead is made from honey, right? That it's the ancestor of all fermented drinks and was around maybe even before land was first cultivated for farming? We're talking ancient thirst-slaking here. We're talking old-school inebriation.)

"What we want people to know," says Lowe, "is that, like beer, there are a lot of different styles of mead. People might only be familiar with Chaucer's, and Chaucer's is kind of the Bud Light of mead – it's everywhere, it's ubiquitous – and most craft beer drinkers wouldn't touch it with a 20-foot pole. One of the things that helps us in the market is that we have a lot of different stuff to try. What do you like? You like dry, you like sweet? We have it. Once we get to the point where we have 10 different meads, it'll be a lot easier to offer something for everyone. Everybody will walk away going, 'OK, I like some mead.' As opposed to people just going, 'Ugh, mead's bad.'"

"It's definitely a challenge," says White­head. "Because a lot of folks, maybe they've tried mead, but they've had a bad homebrewed version of it. Because a lot of people have actually made mead, maybe when they were in college – or they know somebody who's made mead. Or maybe they had it at a Ren fair. And they say, 'Oh, it was terrible. It was super-sweet and it gave me the worst headache.' Well, we have practices where we make really good meads that are not gonna give you that headache. And we've changed a lot of people's minds about the beverage."

So what got these men started on their forward-into-the-past brewing adventure, this now-actually-thriving business endeavor that has their products represented in several local bars and Twin Liquors stores around Austin?

"All of us got started with homebrewing beer," says Simmons. "And after a while we started winning a lot of awards. And one of the things the homebrew competition circuit does, they also champion ciders and meads. And I'd never had mead before. And I'd gone through and made all the beer styles, so I started making cider and mead. And there's quite a few interesting meads you can make, with pretty much anything you want to put into it. And I saw that the only thing out there was a few commercially available ones, national brands. And I'd tried them, and I was like, 'Wow, that's just not representative of all the meads that I've tried before.' Because some of those homebrewed ones were absolutely phenomenal. And we already had a business plan for a brewery, actually, but we decided the beer market was getting a little crowded in Austin. So we were gonna try to do something a little more niche."

"We were coming at it from two different angles," says Lowe. "Mike was in the middle of putting together the business plan to do a brewery, and I was working on a business plan to do a winery. And it occurred to me one day – because we'd been talking about going pro for a while – why don't we kind of meet in the middle and do mead? The market's undergoing tremendous growth. From 2012 to 2013, there was 80-percent growth in the United States. And the numbers aren't in for 2013 to 2014 yet, but from what's been tracked in the last six months, the American Mead Makers Association thinks we may see 100 percent growth by the time they're finished tabulating this year's results." 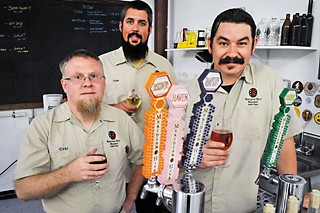 So sales are making a beeline to the top of the charts, and the bees themselves are producing all the honey for this surge. And what about that honey, Meridian Hive guys? You get that from around here somewhere?

"We don't use any local honey, particularly," says Simmons, "because of the amount of honey we use and needing a consistent product over a period of time. We look at 'local' as being the United States, and we get it from national honey brokers. Because bees will travel within a two-mile radius from wherever their hives are to get their food, you can take that cookie-cutter and apply it anywhere, geographically. So if you have bees that are getting their food from wildflowers, most of the time the beekeeper doesn't know the specific pollen source. But they put the bees in one big monoculture, like an orange grove or fields of thyme or whatever, and the bees will produce that type of honey – those are called varietal honeys. We get a lot of orange blossom honey from Florida – it's what we use for all our carbonated products. We use black-button sage for one still brew. We also use Texas guajillo honey. We use cotton blossom from North Texas, meadowfoam honey from the Pacific Northwest, we use a lot of different varietals."

"We'll be releasing our still meads for the first time this Saturday," says Whitehead. "The guajillo and the black-button sage are traditionals – which means they're made from only honey, there's no other fruits or spices added. And the Melissa" – he points to one of the tall bottles on the table – "is what's known as a pyment, which is made from grapes and honey – specifically, in this case, cotton blossom honey, petite sirah, and pinot noir in combination."

So this whole mead culture, considering the spectrum of types that Meridian is producing – the petillant (or slightly sparkling) meads, the still meads, the metheglins (with added spice), the melomels (with added fruit) – it really isn't all about the milords and miladies and turkey legs, is it?

"You were asking if there's a stigma," says Simmons, "if whether the outside people see this as just a Ren fair thing. The other side is, the people within the Ren fairs, they see our mildly carbonated, drier brews as not being authentic – they want more of the thicker, heartier stuff. And so here's our still meads, which have been aging for nine, 10 months now."

"The thing with Meridian Hive," says Whitehead, "is 'meridian' is from geography and 'hive' is for the honey – so it's kind of an exploration of honey and ingredients from around the world."