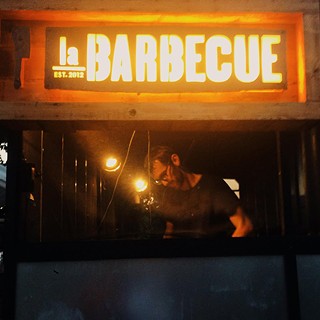 Austin social media was aflame over the weekend with the news, first reported in the Charleston City Paper, that La Barbecue pitmaster John Lewis is opening a Texas barbecue restaurant in Charleston, S.C., next year. Lewis' signature brisket and handmade sausage were such a big hit at the Charleston Brown Water Society's SC-TX BBQ Invitational back in July, he was able to line up investors and find a location in the genteel old port city's Half Mile North development fairly easily. "The Austin barbecue market is just so saturated that I've been looking for somewhere else to expand," Lewis told us in a phone interview. "I looked all over California and New York, but getting the right wood shipped in to either place would be prohibitively expensive. I'm lucky that things came together in Charleston. It's a lot like Austin: a progressive city with a strong culinary tradition, but the barbecue focus is mainly pork, so good brisket is a new thing there. My Dad and I are already working on three new smokers, one for here and the other two for Charleston." The Austin smoker will make it possible for La Barbecue to increase their volume just in time for holiday catering gigs, and the other two should be ready in time for the projected Charleston opening in the spring of 2015.

After long negotiations and compromises with concerned Brentwood and Allandale neighborhood associations, Rick Engel and his partners celebrated the opening of Austin's fourth Little Woodrow's (5425 Burnet Rd.) this week. The new outlet will have limited decibel levels, no outdoor live music, and will close at 1am Fridays and Saturdays. They will feature "Neighborhood Socials" on Wednesday nights with specials on local beers and spirits.

Dai Due (2406 Manor Rd.) has some new promotions: Fried Chicken Sundays features fried chicken, mashed potatoes, green beans, and biscuits to-go between noon and 5pm or by the platter for Sunday supper in the restaurant; Ladies Steak Night Tuesdays with butcher Julia Poplawsky's cut of choice for $10 paired with red wine and Beyoncé (musical selections only – not an actual appearance by the famous Houstonian); Fridays means Gulf seafood.

Carlos Rivero reports his company is about three weeks away from opening the newest El Chilito (1623 E. Seventh). "This one was pretty easy considering it's the same physical footprint [a former Church's Chicken] as the original and we're excited about being in that neighborhood," he told us.