All Your Plate Are Belong to Us 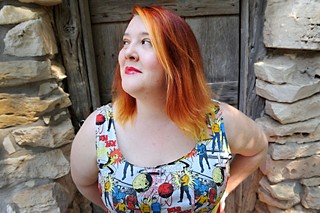 Used to be, people identified themselves through their group. Catholics. The Junior League. The Shriners. Longhorns. Those groups of like-minded people frequently shared food together, in the form of high holidays with feasts (Easter, Passover, Eid, Mabon), bridge games, tailgate parties. But with the rise of fandom beyond sports – gaming, comic books, television shows – we've seen a major shift in which people's identities are shaped much more keenly by the products they consume rather than their cultural affiliation.

That's where Chris-Rachael Oseland comes in. The food blogger-cum-cookbook author behind Kitchen Overlord has built a surprising freelance career turning run-of-the mill recipes – white chocolate-dipped strawberries, caprese salad, pretzels – into geek-themed edible art projects. In her hands, the strawberries turn into Dalek heads, the caprese is transformed into a Settlers of Catan game piece, and the pretzel is dyed and sculpted to resemble an alien egg sure to strike fear in the hearts of Trekkies. While Downton Abbey fans can nosh daintily on their scones with clotted cream and sip Champagne cocktails for their viewing parties, Walking Dead fans can feast on a gory apple tart shaped like a severed arm.

Sitting in the corner of the Emerald Tav­ern, a North Austin game shop-cum-cafe, Oseland explains, "Geek culture is becoming mainstream. There's no stigma left in being geeky, it's our mainstream popular culture moment. At the same time, people define themselves very aggressively by what they eat. And what do you do to bring your community together? You bring them together to have a shared experience. Most or many shared human experiences involve food, from first dates to brises. Of course geeks are going to want to make their shared experiences iconic for what they do."

Oseland provides geeks of all stripes the chance to feed their assembled, like-minded hordes. She self-published her most successful cookbook to date, Dining With the Doctor: The Unauthorized Whovian Cookbook, in late 2012. With viewing parties in mind, she offers a recipe tied to each Dr. Who episode from the series' 2005 reboot forward, spanning from breakfasts to cocktails. The following year, she released Wood for Sheep: The Unauthorized Settlers Cookbook, which offers up themed "maps" for your next Settlers of Catan party, with an eye toward accommodating a broad swath of dietary restrictions. 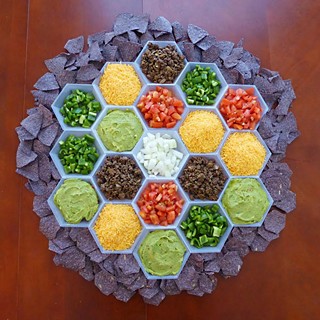 A nacho map from the Settlers of Catan cookbook

"The whole book is all about how to get all of your friends together regardless of what their dietary needs are, whether they're avoiding gluten or dairy or are vegan or keep kosher," Oseland says. "Some people think that if their friends don't or can't eat the same things, then you can't have people over. That's bullshit."

On Nov. 1, Oseland will release An Unexpected Cookbook: The Unofficial Book of Hobbit Cookery, inspired by the historical contexts and tastes of J.R.R. Tolkien, whose descriptions of food are saturated with nostalgia for the "coarse plenty" of the pastoral English country table of his youth. Structured around the seven hobbit meals, Oseland showcases traditional English snacks of scones, hand pies, and Scotch eggs while attempting to hew as closely as possible to the kinds of ingredients that would have been available during Tolkien's day, as well as honoring his strict dictates for what hobbits do and do not eat. "The only New World foods allowed were potatoes, tobacco, and coffee because those were things he could not live without," says Oseland. "Other than that, [hobbits eat] nothing that wasn't, in his mind, English."

The following month, Oseland will release The Illustrated Geek Cookbook, which features recipes from the blog presented in full-color illustrations drawn by Long Island-based artist Tom Gordon. Oseland funded the project through an enormously successful Kickstarter; the original fundraising goal was $3,000, but the grand tally ended up exceeding $16K. Producing these cookbooks is a labor of love, one that involves endless testing and tasting of the same recipe again and again. Pounds upon pounds of food go cold and stale as she works to cook, stage, and photograph each recipe; she donates what she can salvage to homeless people, but much of the food goes in the trash. The expenses are high and the return on investment is meager, yet the former tech writer and historian, who describes herself as a second-generation geek, has found her passion at the intersection of geekdom and food.

She's not the only one, and far from the only woman. Among the female-run geeky food blogs out there are Gourmet Gaming, run by Edinburgh-based designer Daniella Zelli and the Inn at the Crossroads official Game of Thrones food blog, written by New Englanders Chelsea Monroe-Cassel and Sariann Lehrer (who also wrote the official Game of Thrones cookbook, A Feast of Ice & Fire). Kirsten Wright, a Melbourne, Australia-based archivist and historian runs Food Replicator, a Star Trek-themed food blog that draws upon the deep and broad Star Trek universe to fuel its weekly posts.

"Food, especially 21st century food with things like sous vide and modernist cooking, is a pretty geeky pursuit," writes Wright via email. "I think the interests/personality types who are drawn to geek culture are often the same types which are drawn towards food culture. This is helped with the relative popularity and acceptance of geek culture and the increasing translation of professional cooking techniques for use in home kitchens."

Jennifer Imhoff-Dousharm, a West Coast-based geek who has served as one of Oseland's "minions" for several months, contributing recipes like "NeverEnding Story Rock Biter Cookies" for Kitchen Over­lord writes, "The internet is mostly to blame for the uprise in geek-themed recipes. We no longer rely on grandma's oil stained recipe cards but now have access to a million versions of grandma recipes and an even further depth of connections to like-minded individuals who will appreciate a good Falcor bread loaf. Geeks and nerds of any affinity are naturally creative people who embrace innovative projects with gusto. And we're also very passionate and dedicated fans when we find something we like that goes beyond a novelty or fad. Cooking and baking are no exception to this rule."

Within the realm of geek culture, broadly understood to be the domain of doughy white men, Oseland and her fellow geeky food bloggers both uphold and trouble the status quo. She reckons this shields her from the kind of harassment endured by other people who dare to be "openly female" on the Internet. "I've got much better spam filters," says Oseland. "And everything I'm doing now is very appropriately gendered," from the emphasis on cooking to the unassailably cool-yet-feminine geek-themed dresses Oseland sews for herself, such as the frock with a Pac-Man and Space Invad­ers motif she wears on the day of our meeting. "I don't get a lot of geek men attacking me for being a woman who cooks," she laughs.

If food is text and eating it is a means of enacting or demonstrating an identity, then Chris-Rachael Oseland is not just a cookbook author, she is in the process of documenting a cultural moment in which women in any given fandom can have their citrus ginger roasted beet zombie flesh and eat it too.