Restaurant Review: The Devil in the Details

aRoma still needs to iron out the kinks 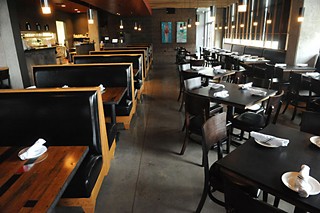 aRoma Italian Kitchen is part of the rapidly changing landscape along a busy South Austin thoroughfare, situated at the street level of the new 704 Apartments, with an inviting patio overlooking venerable neighborhood landmark the Broken Spoke. The sleek interiors are done with reclaimed wood and some furnishings chosen by nearby Mockingbird Domestics. A row of tall, comfortable booths lines one side of the dining room with a banquette and tables running the length of the room under the front windows. A long, curved bar is situated beyond the booths with unobtrusive flat-screen TVs on either end. The bar offers Negronis on tap, one Italian and four local craft brews on draft, and a custom cocktail menu. Just past the bar sits a wood-fired Marra Forni pizza oven imported from Italy. There are even a few seats that make it possible to watch Neapolitan pizzas being shoveled in and out of the 900-degree oven while dining.

aRoma is the first independent restaurant venture of longtime local hospitality professional Dave Whitney, whom many Austinites will recognize from his 14 years as director of operations for Threadgill's restaurants. To help him realize his dream of creating his own Italian restaurant and pizzeria, Whitney chose San Antonio chef Jason Garcia, whose résumé includes work at some of the Alamo City's top restaurants: Bohanan's Prime Steaks & Seafood, Biga on the Banks, Le Rêve, Il Sogno Osteria, and Hotel Havana's Ocho. He picked up his pizza expertise at Dough Pizzeria Napoletana. Whitney and Garcia opened aRoma for dinner in May and recently added lunch service. With a seasoned operator like Whitney and a chef as well-trained as Garcia, the restaurant would appear to be set up for success. Unfortunately, their best efforts were undermined by sloppy, haphazard service and an unacceptably long dining time on our first visit. I'm not sure I would have gone back if a two-visit minimum weren't standard policy for our reviews.

Our group of five was seated at 1pm. One large party was finishing up as we began ordering, and there were only a couple of two-tops in the quiet dining room. Though our server made enthusiastic suggestions about appetizers, he didn't feel the need to write down our order, which was surely a contributing factor in the comedy of errors that followed. We ordered three appetizers, one salad, a pizza for the table, and entrées for everyone. Then we waited in an all-but-empty restaurant. After more than 20 minutes, two of our appetizers arrived (the third never materialized, completely forgotten by our server) and we scarfed them right down. Robiola con funghi ($12) is a mild cow's milk cheese topped with sautéed mushrooms that comes with crispy toasts for slathering, and the house version of caponata ($7) offered diced eggplant and tomatoes tossed in a bright, acidic vinaigrette. And then, we waited. Whitney himself finally came to our table to explain that they'd had "technical difficulties" with our Salsiccia pizza ($16) and were making another. The second effort was still a disappointment – mostly charred, puffy edges with very little pliable center, topped with a few tiny sausage crumbles and a few cherry tomatoes – leading us to wonder if perhaps the best pizza makers work the dinner service.

Entrées arrived along with the missing Barbabietola salad of beets, farro, and goat cheese ($9). The heirloom tomato caprese ($12; $7 extra with shrimp) appeared with mealy tomatoes but without the requested shrimp. When we asked for them, the unconcerned server said, "No problem, I can get you those on the fly," as though the error was ours rather than his own. By this point, it was well after 2pm and all we really wanted was to escape this service nightmare. Aware the restaurant hadn't put its best foot forward with our table, Whitney graciously adjusted our bill, which was a salve to some of our disgruntled feelings. But seriously, who, besides a restaurant critic, has an hour and a half to invest in a restaurant lunch? If aRoma really wants to be in the lunch business, that's got to improve, and quickly.

With some trepidation, I gathered another group for the return visit. The dining room was already buzzing with an early dinner crowd, and our server was pleasant, attentive, and professional. Appetizers, a perfectly delightful arugula-and-prosciutto pizza ($16), and well-sauced pastas all came out in a timely manner. Wines from the predominantly Italian list were replenished when necessary, and we enjoyed a convivial evening instead of grousing. The stand-outs at this meal were a hearty cioppino ($19) chock-full of mussels, shrimp, and fish in a rich, aromatic broth and the Bistecca ($24) which was a toothsome 10-ounce ribeye paired with cauliflower and topped with gorgonzola, a vegetable side dish idea worth stealing. All in all, our experience was as different as, well, night and day. I'm impressed with chef Garcia's cooking and I'd like to see Dave Whitney succeed with aRoma, but better across-the-board training for the lunch staff is a must.