Terry Black's isn't quite ready for the big leagues 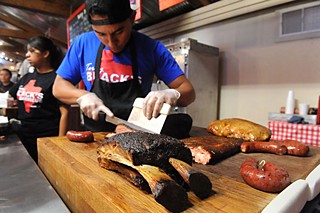 Austin barbecue has been the focus of regional and national media attention for the past few years now, and the bright lights have attracted a new generation of aspiring pitmasters. After putting in some years working the pits at their family's renowned Lockhart barbecue temple, twin brothers Mike and Mark Black struck out to make their mark in the Texas capital. Unfortunately, the representatives of the fourth generation didn't get permission from their grandparents and uncle to use the Blacks' name. So after a cease and desist order, the twins christened their Austin endeavor Terry Black's Barbecue, after their father. The new spot opened in mid-June to a regularly full parking lot and generally favorable buzz.

The twins set up shop in an old restaurant building that was home to everything from a Holiday House to a Fuddruckers, before hosting a revolving door of failed concepts in the more recent past. They spruced up the space with a covered deck for outdoor dining and two levels of dining rooms indoors. The interior decor evokes a rural barbecue shack with horseshoes set in the concrete floor under a gleaming tin roof. Communal tables are outfitted with rolls of paper towels and a cheerful mural proclaims "Brisket Is King," while smiling staff members are eager to please. One note about the interior – with all those hard surfaces and a full dining room, the noise level can be intense, making conversation a real challenge.

My plan for checking out Terry Black's was to make two visits; one with fellow food writers who are well-versed in the top tier of local barbecue offerings and another with a group of discerning South Austin diners. We showed up for lunch on a recent Friday to find none other than Longhorn great Vince Young bidding friends goodbye on the deck. So far, he's been my only celebrity sighting. The restaurant was still semi-full at 1:30 but there was no wait in line, the AC was comfortable, and there was plenty of food. Rather than choose individual plates, we filled cafeteria trays with small servings of all the hot and cold side dishes ($1.98 per 5-ounce serving) offered in the buffet line and progressed to the cashier to order a sampling of all the meats, which are sold by the pound: brisket ($16.98 lean and $15.98 fatty); sausage rings ($12 original and $14.98 jalapeño cheese); turkey ($14.98); pork spare ribs ($15.98); and beef ribs ($16.98). The meats are sliced on a wooden cutting board and weighed to order, the same way barbecue transactions have been made at rural Texas meat markets for the past 100 years. After that, diners choose their drink (tea, soda, beer, wine, or lemonade), grab some pickles, onions, and sliced bread, find a table, and chow down. 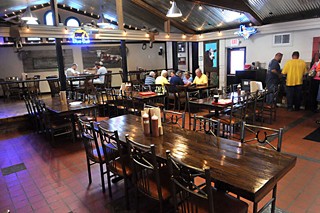 After sampling everything on our various trays, we conferred and found our reactions to the food pretty similar; our criticisms were all about seasoning and smoke. Neither style of brisket bore much seasoning and only the faintest of smoke rings, and the fatty brisket had almost no caramelized bark. While moist, the turkey had no discernible seasoning or smoke, and though the pork ribs were our favorite, even they could have used a little more salt and pepper. The gargantuan beef rib, on the other hand, had a crunchy exterior bark that was salty enough to make a cardiologist faint. The fine-grained original sausage needed more black pepper, and the jalapeño cheese was mostly cheese with only a whisper of chile.

The sides had their own seasoning issues and were generally disappointing. The coleslaw, creamed corn, and cornbread were toothache-sweet, the potato salad mushy, and the pinto beans tasted as though they had wandered in from some Tex-Mex joint. If pressed to choose the two most acceptable, we could have made do with green beans and the mac and cheese. I've got my suspicions that perhaps the desserts (and maybe the sides, as well) are straight off the Sysco truck. The banana pudding wasn't pudding at all, but rather bananas and vanilla wafers folded into whipped topping, and while the fillings of the peach and pecan cobblers were fine, the crust of both had the taste and consistency of cardboard. Sides and desserts may not be the main focus in barbecue joints, but it takes better executed food (scratch cooking) than this to play in the Austin big leagues.

Our dinner visit was somewhat smoother. My chopped beef sandwich ($5.50) was perfectly satisfying – piled with tender, flavorful meat that was not too fatty and plenty of pickles. My guests at this meal were very impressed with the pork ribs (now a two-time winner) and found the lean brisket to their liking, though we agreed all the meats could have benefited from a little more smoke. The green beans got another vote this round, but the rest of the sides were once again pretty lackluster; they could use more attention to detail, and a better balance of flavors.

I commend Mike and Mark Black for striking out to make their own name in the barbecue business. They are already attracting barbecue fans who don't want to stand in line and prefer dining in air-conditioned comfort. However, if they really aspire to break into anyone's top tier of local barbecue emporiums, they'll have to step up their game.