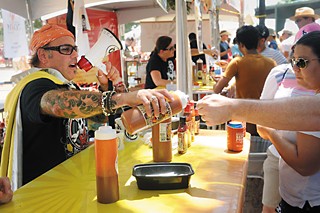 Once again, you salsa-loving Austinites braved the August blast furnace to demonstrate your love for live music, cold beer, and fiery food! In the process, you managed to generate more than 39,000 meals for the Capital Area Food Bank, and that's a worthy service for the whole community at a time when demand is high and supplies are low.

We're always gratified when longtime individual contestants continue to compete and pleased when homegrown and visiting restaurants and commercial bottlers keep coming back year after year to compete. The restaurant category attracted some new contestants from the suburbs. Two of them, Mariachis de Jalisco from Georgetown and Tequila Bar & Grill from Round Rock, went home with first-place recognition, which piques our curiosity about the rest of their food. And the upcoming Fork & Vine introduced itself to the Austin food community with a first-place showing in special variety; how's that for making an unforgettable first impression?

It was great to see Kevin and Kevin Neal Lewis of Austin Slow Burn back in the fold this year alongside a bunch of new blood competing in the commercial bottlers category, including Salinas Salsa, Co., Honest Ember, Salinas Salsa Works, Crazy Good Specialty Foods, Grinders Signature Hot Sauces, and Flyboy's Salsa. It takes a big investment of time, money, energy, and product for small commercial bottlers to participate, and we're glad to provide them a showcase and, sometimes, a launching pad. Both Honest Ember and Grinders went home with prizes in their first year, which we hope will inspire them to return. We hear salsamaker Brian Rush of Tears of Joy is now making signature salsas for rock bands, and two of those concoctions – Red Fang's Night Destroyer and the Sword's Tears of Fire – took prizes this year. Look for them in his Sixth Street shop. Kala Uprety of Kala's Kuisine has surely earned herself a spot in our Hall of Flame with her consistent yearly accolades from the judges and crowds alike. When reviewing results in the commercial bottlers category, the question that immediately springs to mind is this: Where the hell was Sgt. Pepper's? J.P. Hayes' company has been a mainstay since the birth of the fest, but he decided to take a year off in 2014.

Our new Food editor, Brandon Watson, did his first stint as a preliminary judge while head judge and festival co-founder Robb Walsh filled out his celebrity judging panel with some new experts. Lynda Berrios is the Texas local forager for the Southwest region of Whole Foods Market and is always on the lookout for great Texas products. Will Holland is a restaurant consultant, an executive chef on Caribbean yacht cruises, an app developer, and a partner in the condiment company Wolf Creek Quality Foods. We're glad they were able to join in the fun.

We noticed some new names on the list of individual winners as well as some names of folks who've moved up from honorable mention to the winners' circle. We salute your perseverance and encourage you to keep making salsa. Our heartiest congratulations to all the winners. And until next year, in the words of our beloved Jill Lewis, "Peace, love, and chiles, baby!"