Richard's Rainwater keeps its eye in the sky 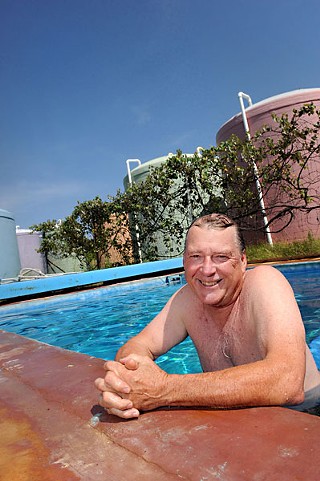 The rainwater that doesn't make it into Richard Heinichen's bottles is still put to good use. (Photos by John Anderson)

The first person to legally bottle and sell straight-from-the-sky (and sent through a state-approved filter) rainwater in Texas keeps three sealed, largely untouched bottles of water on a shelf inside of the office on his Dripping Springs compound. 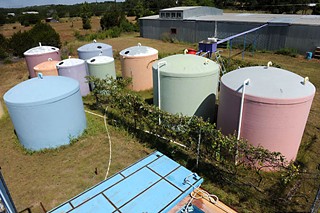 In one: 12 ounces of water from the city of Austin tap system, labeled June 15, 2005. Shake it up, and milk-colored deposits start stirring like a snow globe. Calcium, magnesium, dichloroacetic acid, and total trihalomethanes. "A list of dissolved pharmaceuticals as long as your leg," maintains Richard Heinichen, the 67-year-old who's spent much of the past two decades preaching the gospel of rainwater from 10 acres in Central Texas. Same goes for the second bottle, a futuristic 12.7-ounce bottle of agua from Norwegian artesian brand Voss, purchased in 2006. That buildup's more translucent; Heinichen estimates it's something like limestone or granite. He doesn't know, really. Never taken a look at Voss' plant.

What he does know, however, and what becomes significantly more obvious upon a quick shake-up, is that there's significantly more something in Voss' water than in a 12-ounce bottle of Richard's Rainwater Heinichen bottled in 2004. Shake Heinichen's water up and you get nothing. "Because rainwater leaves all that behind," he explains. "It never had anything in it, so you never have to take it out." 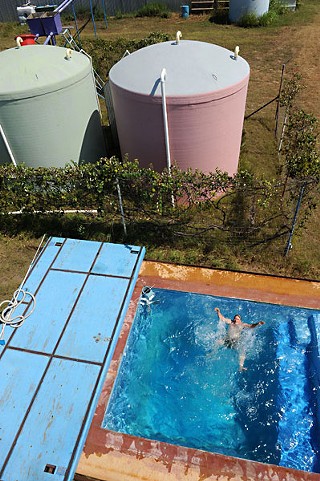 You can spend two days on the telephone with damn near every drinking water expert in Texas and still not come any closer to drawing a conclusion as to whether or not rainwater is inherently healthier than city of Austin tap. Scholars will refuse to talk about it, saying any measurements either way must be considered as "parts per million." Austin Water Utility Drink­ing Water Quality Reports maintain "the drinking water provided to you in 2013 met all national and state water quality standards" and that any "harmful contaminants" that may have found their way into said water during its extraction from two plants stationed along the High­land Lake chain have been treated, filtered, and removed by the time they reach your faucets.

Even fluoride amounts are suspect. The anti-cavity anion first introduced into United States tap water systems in the early Fifties has been hailed as "the second most successful public health project to eliminate human misery" by my childhood dentist – first most successful being sewage treatment – a process of immersion that's effectively changed the way Americans experience tooth decay. Tap water's got it; Richard's Rainwater doesn't. But city of Austin tap water contains an average fluoride presence of .56 parts per million. You could get the same serving by brushing your teeth with the right toothpaste – or eating about 12 strawberries. 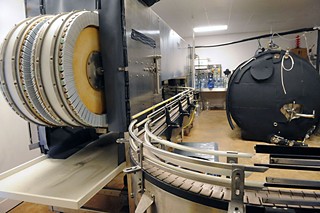 Indeed, nearly every individual interviewed agrees it's simply a matter of preference. If you can tolerate the taste of chlorine in your tap water, you may enjoy the added benefits of lower costs and fluoride. If you want a soft water – two hydrogens, one oxygen, and a shot of nitrogen before its bottling – there are some minerals you're going to want to acquire elsewhere. Just don't tell that to Richard Heinichen. If a sip of water ever touched Earth's soil, he doesn't want it.

"The solution to pollution's dilution," he asserts with regularity as we tour the 10-acre compound he bought and deemed Tank Town World Headquarters in 1998; three years later, he became the first individual to receive approval from the Texas Com­mission on Environ­men­tal Quality to bottle and sell filtered rainwater to the public. "The whole thing about people saying they need mineral water is crap. What you're saying is 'I've got to have water with rocks in it.' Then your body goes and uses all this energy trying to get rid of the rocks. Some people get all their liquid drinking Coke or soft drinks. Then your body's got to remove the sugar. That's the RO [reverse osmosis] in your body taking the sugar out." 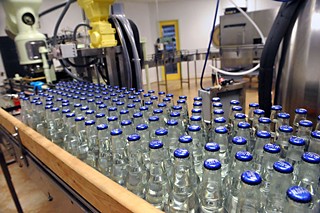 With the help of five employees who do everything from bottling the water itself to building storage systems for his rainwater collection installation arm, Heinichen has managed to accrue more than 250,000 gallons of drinkable rainwater, some of which he's held for 11 years. "Water's 4.5 billion years old, and it doesn't go bad," he says, pulling the stop-plug off a 12,500 gallon tank painted to look like a green turtle. "It only gets better. Isn't that something? Crystal clear."

Rainwater collection has been practiced since before time started counting up from zero. Its presence endured in India and parts of the Middle East, but wells, water systems, and robust utility grids have rendered it largely irrelevant around the States – especially with regards to mass production. 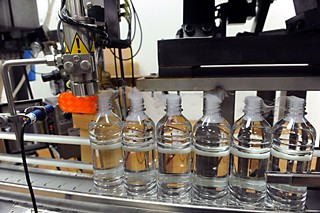 Heinichen got into it after moving to Dripping Springs from Tarrytown to help his sister-in-law (Heinichen's wife, Suzy Banks, wrote the Chronicle's "Hearth and Soul" column in the Nineties) open the Austin Zoo. He thought the water in Hays County tasted like sulfur and started harvesting "cloud juice" in 1992 on a plot of land near Oak Hill. He moved operations to the 10-acre space a couple of miles west of Dripping Springs six years later and built a rain barn with a 20,000-square-foot collection roof. "One inch of rain gets us 15,000 gallons," he claims. "We do that 32 times a year." And thus, Tank Town's storage tally boasts enough water to package 4 million bottles before the next rainfall.

The problem, of course, is not the physical buildup of that stash so much as the inherent fact that local demand for rainwater fails to meet Tank Town's supply. Heinichen has kept operations moving through his installment services and a few steady distribution deals, including service to hotels San José and Saint Cecilia, as well as retail placement at Central Market and Wheatsville Co-op (he also counts Franklin Barbecue as a client, saying the meat chief prefers to tenderize his meat with rainwater), but he maintains there's no money to be found in rainwater sales. 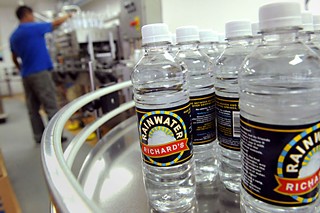 "When I started doing this, I thought 'Shit, everybody's going to want this water. It's so fantastic.' Wrong. They like it, but they can get water cheaper. I've got to pay a working man's wage, and can't sell it for that cheap. You can buy a 24-pack of spring water for $3. I can't even buy bottles for that." A case of Richard's Rainwater costs $10.

Still, Heinichen holds true that the consumption of rainwater "is the future" and points to a series of legislative advancements that will hopefully encourage such progress. There was the legislation passed in 2001 that created a sales tax exemption for all rainwater harvesting-related purchases, the 2003 decree that property owners' associations couldn't prohibit you from collection on property, and the 2011 ruling that allowed financial institutions to provide loans to developments that will use harvested rainwater as the sole source of good water. Four years ago he bought a bunch of greasy parts from old counter-rotary fillers used by Coca-Cola and started bottling carbonated Happy Water. "Local Topo" he calls it, in reference to Topo Chico (bottled in Monterrey, Mexico). It's early, but he thinks it may prove fruitful.

"We'll see how Lake Travis falls," Heinichen says. "Right now, the drought's been really good for this. It's opened people's eyes up to the potential."